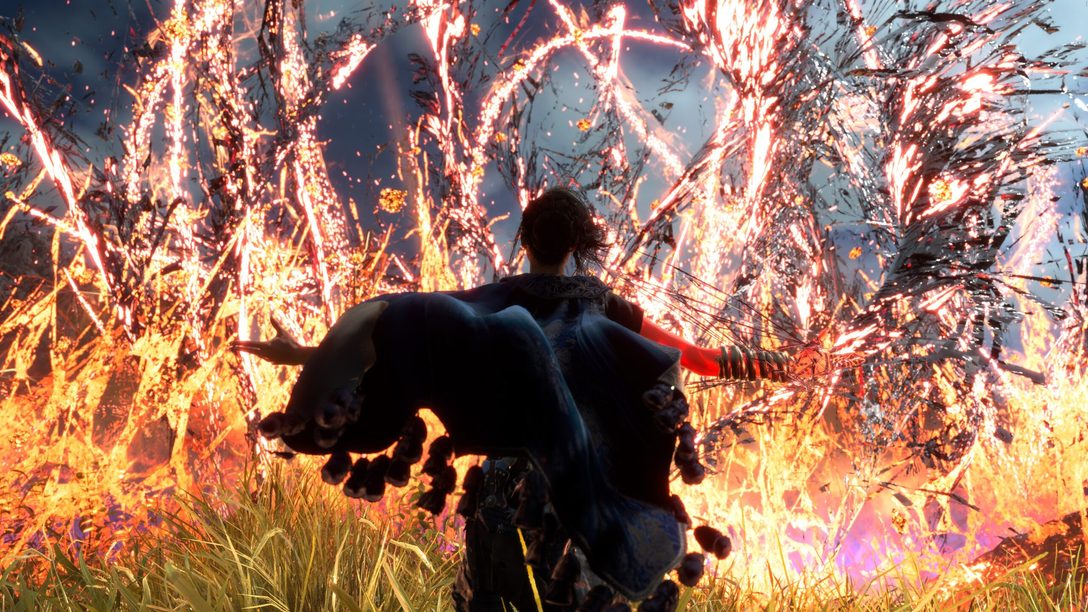 Hands-on with Frey’s moveset in a lengthy demo showcases what the moment-to-moment gameplay will be like.

We’ve met the cast, seen action-packed trailers and been tantalized with a closer look at the game’s central villains. Today we can detail how the moment-to-moment gameplay of Frey’s journey unfolds by way of a recent hands-on with Forspoken.

That time is spent in a sprawling valley that’s ripe to play – and explore – with mystical parkour and test multiple magic spells unlocked for this demo. There are five objectives dotted around the map, coaxing players towards mission-based tours of Frey’s skills and the challenges she’ll face. Yet the region’s topography is an open invitation to deviate: mountain pathways, floating rock chunks, gigantic bridges, lakes and ravaged villages. A brief tutorial at the valley’s entrance aside, free exploration awaits.

A spellcaster with speed

That tutorial introduces Frey’s magically-imbued mobility, combat options and crucially how the two are interlinked. A few slow-moving humanoids to test these abilities allow for relaxed experimentation. By demo’s end, a tense battle against a ferocious and fast alligator-type being tests everything learnt up to that point. Juggling attack and support magics and knowing when – and how – to cast them, precise use of parkour to accent those spells and dodge out of harm’s way. 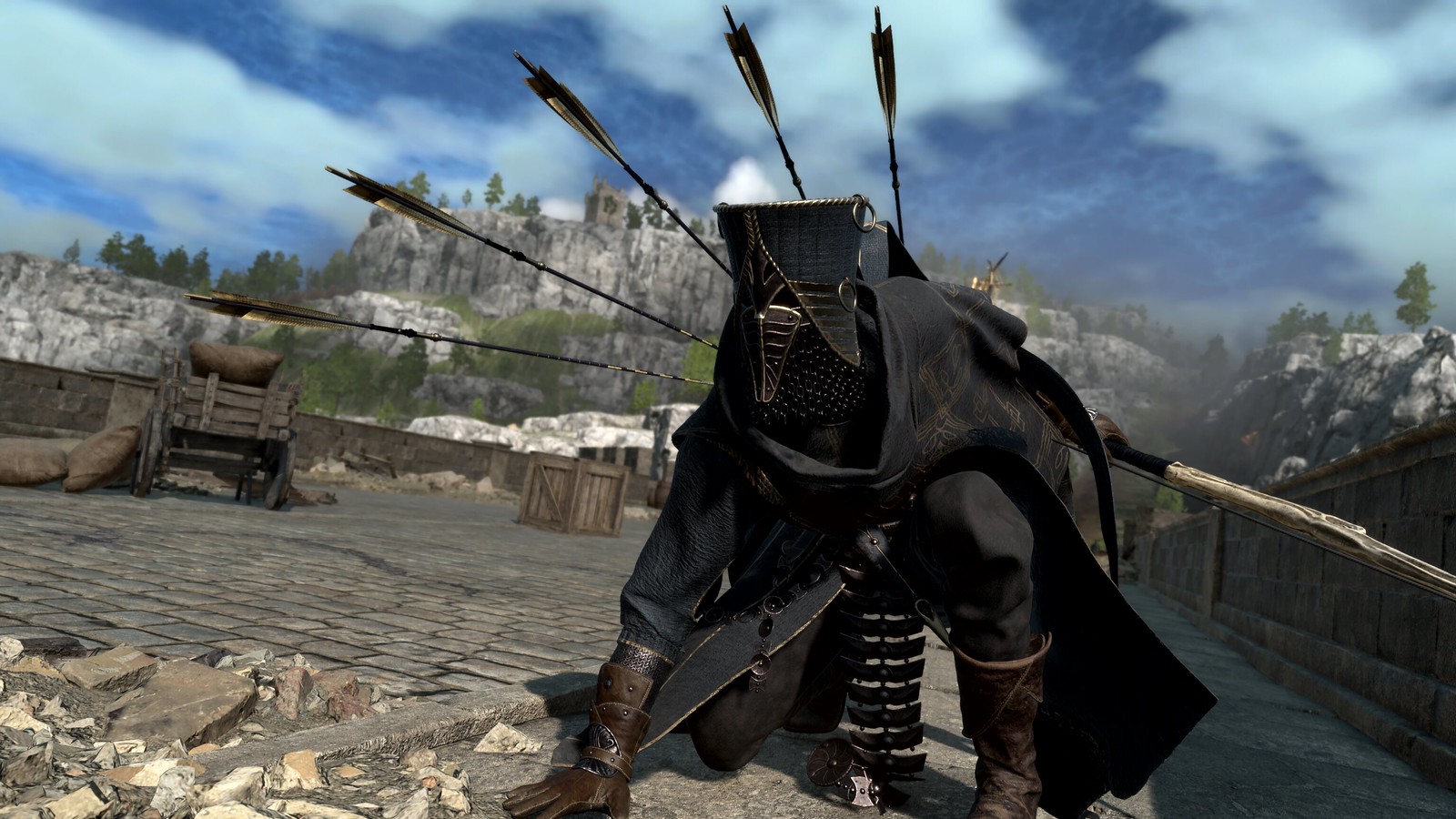 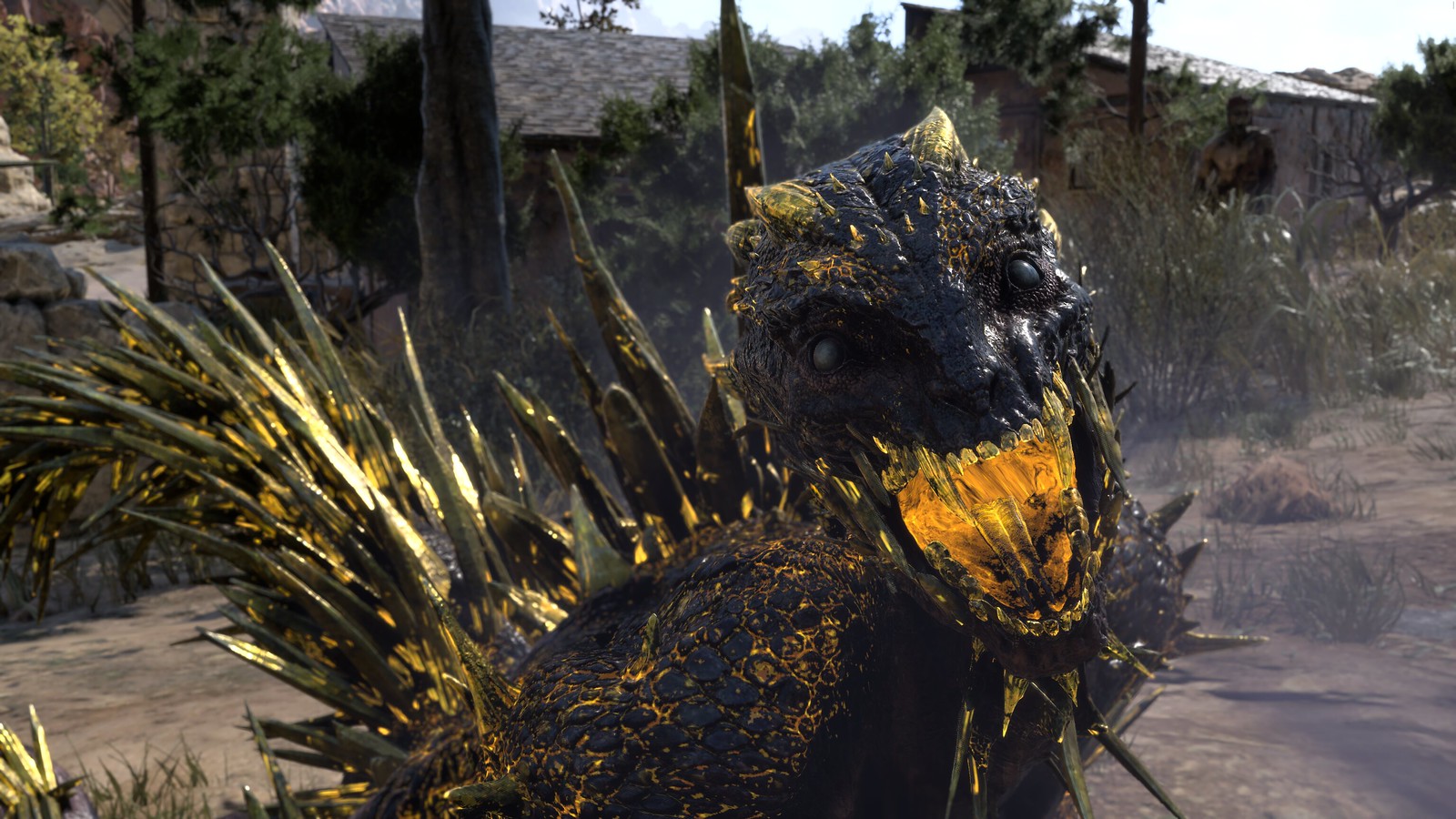 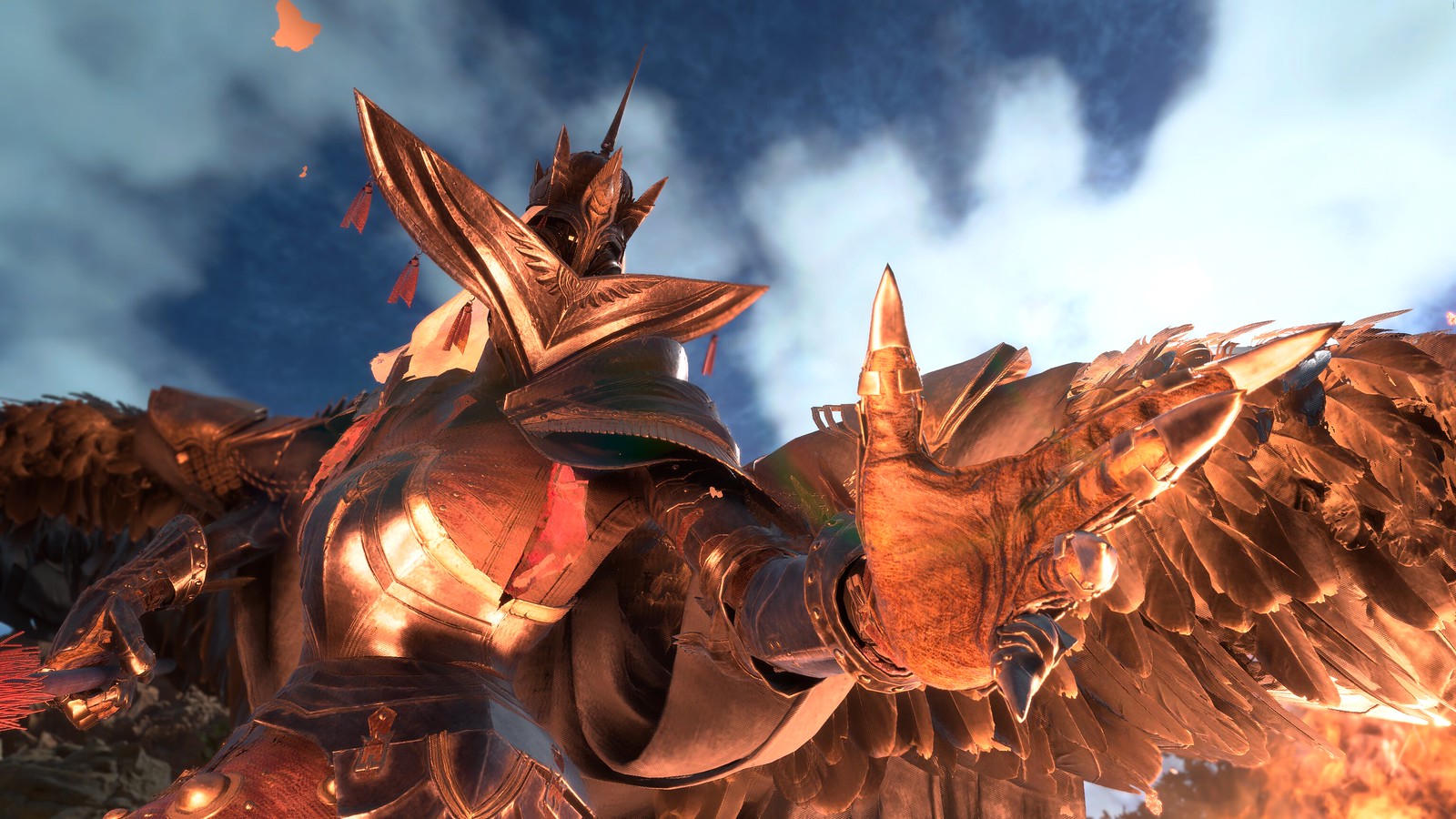 Enemy design even in this short slice of gameplay is varied, though you’ll need to either Cuff Scan or activate Photo Mode to halt their aggressiveness long enough to admire their look.

Between these clashes that bookend my play time, a slew of enemy types dot the land, ready to be fought or raced past: wandering crowds of corrupted souls and herds of aggressive stags, gold horned crocodiles, winged aggressors. One objective directs Frey to a bridge patrolled by bow-wielding fiends who, once downed, give way to a larger mini-boss opponent. These are servants to the Tantas, Athia’s malevolent rulers, who Frey will eventually face one by one. Whatever shape those confrontations take, conquering each will see that Tanta’s power added to your arsenal. At the demo’s start, I can tap into two sets: Frey’s earth-based magic as well as Tanta Sila’s fire spells.

The demo culminates in a boss fight against an Altered Quinkana, all teeth and tail, requiring quick moves to conquer. It’s also a great opportunity to use Sila’s Crucible support magic, which casts a wall of fire around Frey.

Each magic set is divided into two strands: multiple Support and a trio of Attack types. L2 triggers the former, R2 the latter. Each spell has a different cooldown period and a specific way to cast it, be it tap, hold or charge. Holding a trigger may let you aim a spell’s area of impact before release, charge another spell’s strength or fire a continual cascade of selected magic. Each cast has a unique feel thanks to the PS5 DualSense controller’s haptic feedback.

Press L1 and R1 together to open a circular menu and select which magic set is your current. Use L1 or R1 to bring up a circular menu for Support of Attack, roll to your chosen type with the left stick, and release to lock that spell into part of a preset loadout. You’ve one loadout per magic set, with a quick switch between via left or right on the D-Pad.

Use the Bind Support magic for crowd control, trapping enemy groups to let you deliver some health-sapping attacks or focus on stragglers.

Frequent switching is recommended and necessary, as each spell is tailored to best tackle a certain enemy number or kind. Changing up loadouts is also a good way to find powerfully complimentary spells. An early favorite is Sila’s Crucible (Support) and Rage Slice (Attack). The first is a castable firewall that encircles Frey. Any enemies wandering into it burn, but it also buffs her attack power when combating any foes within the enclosure. Rage Slice is a melee combo whose finisher sends enemies flying backwards – right into the flames.

A world to explore

As with any action RPG, there’s no mystical size-fits-all. Elemental resistance is a factor for one. Text pop ups during attacks will inform you if an enemy is resistant to certain spell types. But play it more tactical – and digest some lore – with a scan from your Cuff (Up on the D-Pad) when nearby pre-clash. The camera will zoom in to any enemy within the scan’s radius, with the sentient bracelet upon your arm sharing the necessary deets. (A quick and brief shout out to Forspoken’s wider menu design, the fish-eye lens approach makes for a visually-appealing scroll through the various tabs.)

Collect mana to unlock new spells. Not shown are the customisation options for Frey’s outfit: each robe, necklace and nail color offers different buffs. Combine to create a perk set that fits your playstyle.

From fish-eye to eagle’s eye: strewn across the land are stone Belfreys. Activating the scan once inside will launch a pannable viewpoint up high, highlighting nearby areas of interest. Choose one to track it on the UI, and at any point you can summon a Compass, a golden thread that’ll arrow off to direct you towards your target. You’re still free to roam and change quests on the fly. Belfreys aren’t the only stone monuments to discover: others unlock items. One triggered a side-quest, both flashback and timed challenge that played out in a nearby derelict fort, as I had to defend civilians from attacking enemy waves for a set amount of time.

You’ll also discover Refuges, small huts that offer Frey respite from the dangers outside. There are multiple interactive elements within each, including a small library, from which you can select Spellcraft Challenges, pinning these side-objectives onto a on-screen to-do list. All grant permanent buffs – such as use of one spell refiling one portion of your stamina bar – for the price of meeting certain criteria.

For my playthrough these were combat-specific, nudging me towards incorporating Frey’s parkour into encounters, that flamboyance key to drawing out the beauty of the combat system. A ground based Blast Slice for example, will toss a magical spear at a targeted enemy. Performing the spell in the air will initiate a ground slam, with multiple spears rippling out from the ground from the point of impact. There’s whip-like strikes, mid-air flail attacks… movement coupled with button combos unleashes a whirling dervish. As much as all spells have cooldowns, your parkour is tied to a stamina bar. Judicious use of dodges necessary to not drain it and leave yourself open to attack.

Frey is fleet-footed, combat fast-paced. Such speed along with an elaborate spell system, tracking multiple enemies and their attack patterns as well as registering on-screen prompts takes time to acclimatize to, which shouldn’t be a problem when easing into the game proper as opposed to being handed a suite of tools from the off. There were increasingly frequent moments when the complimentary systems clicked and I found myself lost in the battle flow as intended. Importantly despite the speed and showy moveset, I always feel completely in control of Frey. Yet a welcome ability tied to Sila’s Magic lets you slow time briefly and lock onto and zip towards an enemy. A magic grapple both meant to escape immediate danger but also get close enough to deliver a killing blow if prompted.

Flow makes for satisfying traversal through the world

That zip ability doubles as a traversal tool outside combat, using glowing rocks as anchor points to leap higher and further. It becomes a useful skill as fight turns to flight, spells are holstered and I take to speeding across the land. There’s a simple joy to the parkour, named in-game as Flow. Start heading in any direction, hold Circle and off you go. You can take your finger off the button for a few seconds, either to transition into a jump or pan the camera (Flow-powered jumps are also key to initiating aerial attacks in combat). As such while the scale of the valley is huge, travel across is enjoyably swift as a result.

The distant horizon beckons, but Athia’s secrets will have to wait for a few more months, when the game launches on PS5 on January 24 next year.