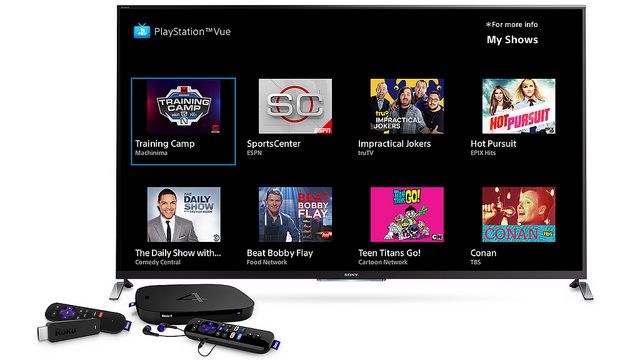 We are happy to share that PlayStation Vue is expanding to Roku devices today, with support for Android smartphones and tablets launching next week. Since we’ve launched PlayStation Vue nationwide, we have heard from many of you that Roku and Android are the top devices you wanted us to add, so we’re pleased to make this a reality.

If you don’t already have a PlayStation Vue account, you can sign up for the seven-day free trial option through the PlayStation Vue website, or through your PS4 or PS3.

Here are the plans we have available. For specific information on pricing and channel lineup in your city, including live local stations and regional sports programming, please visit psvue.com and type in your zip code.

With an Internet connection and a PlayStation Vue TV-connected device, there are no additional fees such as monthly set-top box fees, or long-term contracts. In addition to Roku devices, PlayStation Vue is also available on PS4, PS3, Amazon Fire TV, and Fire TV Stick, as well as iPhone and iPad through the PlayStation Vue mobile app.

Users can also access PlayStation Vue on Chromecast though compatible iOS devices. PlayStation Vue provides up to five simultaneous streams across different devices, including up to three mobile devices used outside of the home, so you don’t have to worry about using multiple devices at the same time.

Next week, we’ll be launching the PlayStation Vue mobile app for Android, so you can use your existing subscription to access PlayStation Vue on Android smartphones and tablets (with OS v4.4 and higher) through our mobile app. It also supports Chromecast and other Google Cast-enabled devices. We’ll provide more information on the launch date for Android soon, so stay tuned.