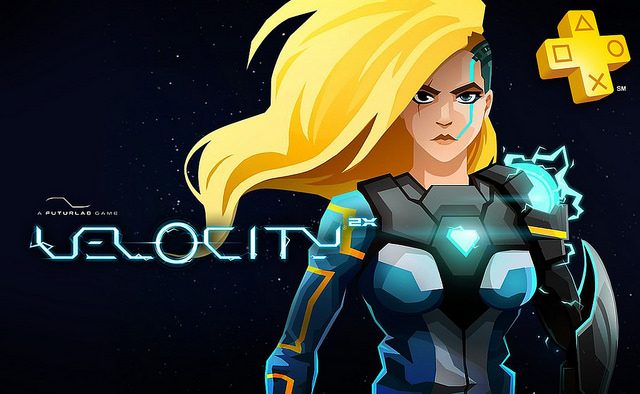 There’s a little bit of déjà vu going on as our PlayStation Plus members will once again receive two games free the day they hit the PlayStation Store – Velocity 2X on PS4 and Joe Danger’s release on PS Vita. Of course, there are other great titles including Sportsfriends on PS4, PS All Stars Battle Royale and Hoard on PS3 and TxK on PS Vita.

On PS4, Plus members will be able to download Velocity 2X and Sportsfriends. Velocity 2X is the sequel to Velocity Ultra and features arcade shooting and puzzle platforming with a cool teleportation mechanic. Sportsfriends is the perfect title to complement your parties, as it features 4 mini-games – BaraBariBall, Hokra, Super Pole Riders and Johann Sebastian Joust– to bring out the competitive side in everyone.

For PlayStation 3 owners, you can nab PlayStation All Stars Battle Royale, the game where you can get together with friends and pit PlayStation characters like Sly Cooper and Kratos against each other. And Hoard, an action-strategy title where you’ll play as a dragon attempting to get as much gold as possible.

PlayStation Vita owners can pick up Joe Danger for the first time on the platform and enjoy some good old fashioned stunt racing, as well as TxK, a remake of the classic arcade shooter Tempest.

All of these games will be free for Plus members starting September 2nd. If you want to see these titles in action, check out the video below.

Free for PS Plus members
Use the Quarp Drive teleport to outsmart the evil Vokh in race-tuned space combat, then dock your ship, jump out and continue the fight on foot! Velocity 2X is the visually dazzling action packed sequel to Velocity Ultra, featuring amazing puzzle-platforming action alongside award-winning shooter gameplay!

Free for PS Plus members
From Kratos to Sly Cooper, Sweet Tooth to Parappa the Rapper, Sony characters from all over the gaming spectrum are brought together in a fighting adventure that’s both easy to play, and hard to master. Take the battle online for competitive multiplayer action, or go head to head with a group of friends on the couch and prove once and for all who’s really the best!

Free for PS Plus members
HOARD is an innovative fast-paced arcade action-strategy title from Big Sandwich Games that puts you in control of conquering a medieval kingdom. Your goal is to build a giant pile of gold to sleep on in your lair. YOU ARE THE DRAGON: Scare villages! Burn castles! Collect treasure! Roast pesky knights and thieves! Compete or co-operate with other dragons in epic multiplayer battles!

Free for PS Plus members
Take Joe on a ride from zero to hero in a game that lives up to its big brother with no compromises. Eye-popping super-smooth 60FPS graphics use only the very brightest colours on Vita’s lovely screen, and we’ve revamped the JD control scheme so it plays just as nicely, too, including touch controls for the editor modes!

Free for PS Plus members
Glowing vectors, explosive particle effects and a pulse-pounding soundtrack are core elements of many modern arcade shooters – a style that Llamasoft defined with its seminal 90s tube shooter. TxK is the spiritual successor to that genre-defining work and brings you 100 levels of engrossing score-chasing gameplay, married to an outstanding soundtrack that will have your head nodding as you blast your way onto the scoreboards.