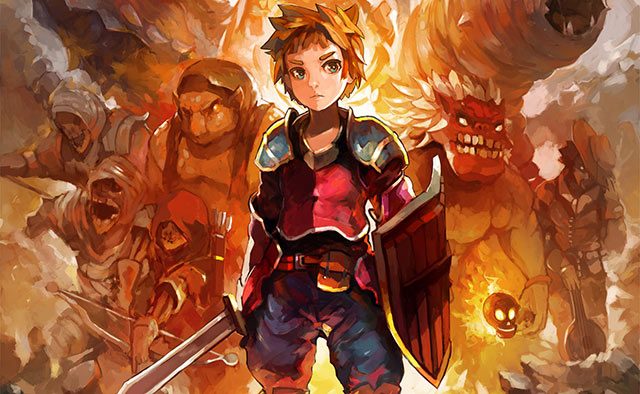 Hello PlayStation fans! We held an awesome event at our offices yesterday, and in case you missed some of our new game announcements I wanted to round them up for you below. Also note that all of these titles will be making their console debut on PlayStation platforms.

Independent developers are continuing to create incredible games for PS4, PS3, and PS Vita, and we can’t wait to bring them to you throughout this year and beyond.

“Looking back, making our upcoming action sidescroller Apotheon in the visage of ancient Greek pottery seemed like an obvious choice. Everything is already there. The 2D perspective, the awesome narrative and setting possibilities, heroes fighting monsters and magical goat-men with no pants… All we really had to do was figure out how to make the art on those pots move around and make it into an interesting game.”

“Axiom Verge is a retro-styled 2D “metroidvania” action-adventure, inspired by such classics as Rygar, Contra, Bionic Commando, Blaster Master, and, of course, Metroid. But it also gives you power over glitches like those found in classic games, allowing you to scramble enemies, corrupt environments, and enter hidden areas.”

“In Chasm, players take up the role of Daltyn, a young soldier sent to investigate the mysterious disappearance of a mining crew in the remote mountain town of Karthas. Upon arrival you learn the town has been cut off from the outside world by supernatural forces. Now trapped, you are left with no option but to explore the mines below the town and uncover the source of the disturbances. Only by gaining new special abilities, evading dangerous traps, and defeating hordes of deadly enemies can you hope to save Karthas — and possibly the world!”

“New dangers threaten our intrepid hero. And they happen to come in a variety of ghastly shapes and sizes.”

“Drifter is an open-world, sandbox, space trading game with a procedurally-generated galaxy 100,000 light years across, made up of tens of thousands of star systems to explore and features an original soundtrack by composer Danny Baranowsky.”

“The theme of Escape Goat 2 is transformation. As you manipulate hidden machinery, walls move around and blocks settle into new places. Things look different when you’re done with the room (especially if you employ your mighty horns to their best use). And you have a remarkable companion to help you on your journey…”

“Ironclad Tactics is a fast-paced, card-based tactics game set in the American Civil War… with robots! Although it’s reminiscent of the tactics games and collectible card games that we’re all familiar with, we’ve done a few things that make the game stand out.”

“Simultaneous play is not necessarily cooperative, and co-op has come a long way since arcade ruled the Earth. We’re living in a post-Left 4 Dead, post-Rock Band world, and sometime in 2009, we decided to stop waiting for someone else to apply a few of the many design innovations of the past twenty years to the humble shoot-em-up genre.”

“We have the most fun playing Nidhogg in front of our TV with friends. Sharing a TV and controllers is way more comfortable than crowding around someone’s desk and sharing a keyboard. Exclusive to the PS4 version, the built-in tournament mode now indicates your fencer’s color on DualShock 4′s light bar… how cool is that?!”

“Skulls of the Shogun is a mash-up of turn-based strategy and fighting-game flare, scientifically engineered for lightning-quick rounds, thoughtful strategic play, and a frequently inappropriate sense of humor with its tongue planted firmly in cheek. And whether you’re into single or multiplayer, Skulls has you covered.”

“We’re once again teaming up with BlitWorks, who did a great job on bringing the game to PS3 and PS Vita. For PS4, we want to do even more — like bump up the graphics to 1080p, let players upload replays to the leaderboards, add more social features to the Daily Challenge, and otherwise take advantage of the PS4′s unique hardware.”

“The game mechanics and controls in Starwhal are not complex — navigate your narwhal to tag your opponent’s heart and protect your own. Of course, the narwhals themselves wiggle all over the place in spastic fits of salty marine protest, but therein lies at least half the fun.”