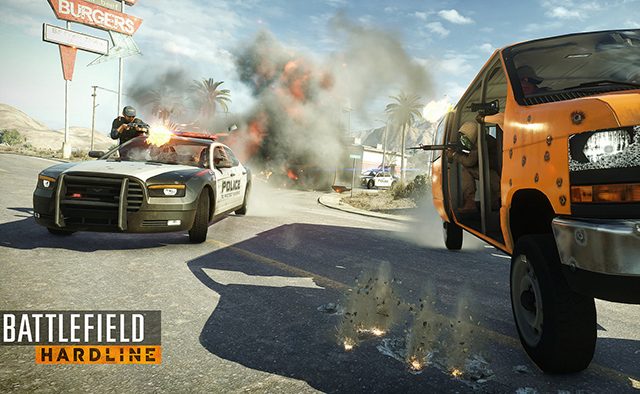 It’s here. The Battlefield Hardline open multiplayer beta is available on both PS4 and PS3 today. If you have PlayStation Plus, all you have to do is hit up PlayStation Store and download the free beta (exact availability times vary by region and content refresh schedule). Now, I’m a “get to the point” kinda guy, so here’s what you can expect during the next six days of beta.

As you hit the streets in one of the muscle cars in Hotwire mode, defend or jack the vault in Heist, or throw down in classic Conquest, we want to hear about what you like or don’t like about your game experiences. You can voice all your feedback and suggestions on the Battlefield Hardline Forums.

Hardline is all about heated exchanges and chaotic Battlefield moments, and we want to see them. Share your in-game insanity by using the Battlefield Hardline theme in ShareFactory. Tag your clips with #BFHTopPlay when you post and you might get featured on one of Battlefield’s official channels.

No more waiting. Whet those appetites in Open Beta for the full deal that launches on March 17th.

Get the latest Battlefield Hardline news with new updates every Wednesday from now to launch.

*The beta will be available February 4th through 8th in Japan on PS4 and PS3.