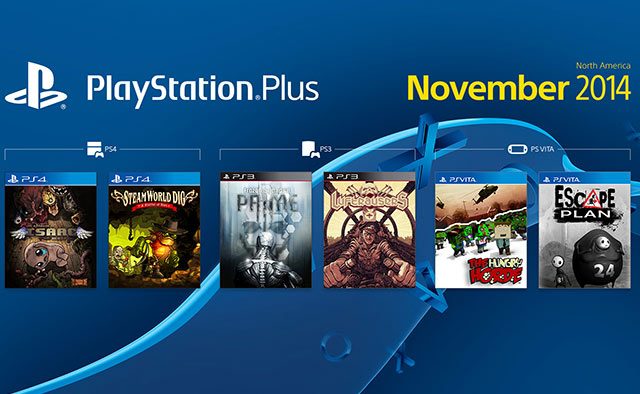 This month we’ve got even more day and date releases into PlayStation Plus including The Binding of Isaac: Rebirth on PS4, Frozen Synapse Prime on PS3 and the Hungry Horde on PS Vita. Our members will also receive the delightful Steamworld Dig on PS4, addictive Luftrausers on PS3 and charming Escape Plan on PS Vita.

Our PS4 members will discover what randomly generated evils lie in the basement in The Binding of Isaac: Rebirth, as well as dig for treasures below a western town populated by robots with Steamworld Dig. For PlayStation 3, our members will receive two types of shooters, Frozen Synapse Prime which requires a strategic mind, and the more arcade-y Luftrausers. Finally, our Vita owners can enjoy the touch-screen puzzler Escape Plan as well as The Hungry Horde, where you’ll try and amass the largest zombie horde possible before the government catches on!

All of these games will be free for Plus members starting today when PlayStation Store updates.

Free for PS Plus members
The Binding of Isaac is a randomly generated action RPG shooter with heavy Rogue-like elements. Following Isaac on his journey, players will find bizarre treasures that change Isaac’s form giving him superhuman abilities and enabling him to fight off droves of mysterious creatures, discover secrets and fight his way to safety. The Binding of Isaac: Rebirth is the ultimate of remakes with an all-new highly efficient game engine, all-new hand-drawn pixel style artwork, highly polished visual effects, all-new soundtrack and audio by Ridiculon, and hundreds upon hundreds of designs, redesigns and re-tuned enhancements by series creator, Edmund McMillen.

Free for PS Plus members
SteamWorld Dig is a platform mining adventure with strong Metroidvanian influences. Take the role of Rusty, a lone mining steambot, as he arrives at an old mining town in great need. Dig your way through the old earth, gaining riches while uncovering the ancient threat that lurks below…

Free for PS Plus members
Take on the role of Tactics, leading a small rebel faction to overthrow a powerful corporation controlling the city of Markov Geist. Control an elite strike team of futuristic soldiers from shotgunners and snipers, to grenadiers and machine-gunners in the ultimate turn-based strategy game. Plot paths and issue orders to your units, test your plans and predict your opponent in each turn. Combat plays out on procedural, 3D, destructible and customizable battlefields.

Free for PS Plus members
The skies will be set aflame and the seas will overflow with wreckage in Vlambeer’s stylish arcade shooter LUFTRAUSERS! Select from over 125 combinations of weapons, bodies, and propulsion systems and take to the skies to battle enemy fighter planes, battleships, submarines, and rival aces for glory, honor, and high scores. Bravely volunteer for one of over 100 daring missions and become the most legendary Rauser pilot of all time!

Free for PS Plus members
Escape Plan takes advantage of the PlayStation®Vita system’s multi-touch display, rear touch panel, swipe interfaces and motion sensor, putting the fate of Lil & Laarg in the palm of your hand. Players can swipe, tap, poke, squeeze and slap our hapless heroes and interact with the unique and twisted puzzles of each room. Only you can help them survive before their captor and nemesis, Bakuki, recycles them and turns them into his minions. Swipe as if your life depended on it in this exclusive survival-humor game for the PS Vita system.

Free for PS Plus members
Lead a horde of zombies on a manic mission to expand the ranks of the undead and destroy humanity. Battle the clock and attempt to trash the planet in this highly addictive, run-till-you-die zombie rampage – one game and you’ll be “turned”!

What are your thoughts on October’s PlayStation Plus game lineup?