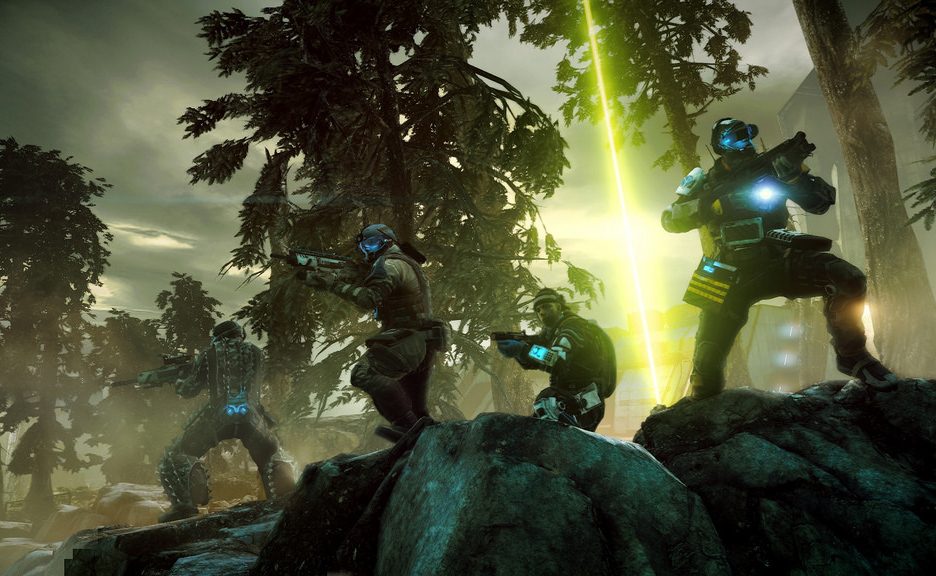 Killzone Shadow Fall Intercept places you and up to three of your friends on the elite VSA team known as Intelligence Squad Alpha. Operating behind enemy lines, your team is on a mission to intercept and relay Helghast military transmissions back to VSA headquarters.

To succeed, you’ll need to keep Helghast interlopers at bay long enough to establish a Hacking Uplink and transmit the data. Thankfully, the members of your team have all been trained in unique Combat Roles — from close-quarters Assault and mid-to-long range Marksman roles to supportive Medic and Tactician roles.

To successfully fend off the enemy and transmit the intel back to HQ, teamwork is absolutely essential. Your Team Score indicates how close you are to establishing a Hacking Uplink; increase it by defending your Uplinks from Helghast capture attempts, or by “banking” the Personal Score you’ve accumulated from kills, ability uses, and recaptures. You can even earn bonuses such as artillery strikes and jetpacks!

Always be on your guard, though: if you lose an Uplink to the enemy or have to respawn after critical injury, your Team Score will incur a penalty. If all members of your team are dead and your Team Score is too low to allow respawning, the mission is a failure.

Just like the members of Intelligence Squad Alpha, the AI-controlled Helghast enemies in Killzone Shadow Fall Intercept have their own sets of goals and Combat Roles. They will switch up tactics and angles of attack when they capture an Uplink, so you’ll need to adapt your defense strategy accordingly. On top of that, the enemy can call on special Helghast champions with unique abilities, based on key characters from the Shadow Fall single-player campaign. Expect to go up against some very familiar faces…

Killzone Shadow Fall Intercept comes with four arena maps inspired by locations from the single-player campaign, and it launches this June. It will be available for free for Season Pass holders. A standalone version of the co-op experience will also be available later this year.

We’ll have more in-depth information on Combat Roles, maps, and tactics for the co-op mode in the coming weeks, so stay tuned to Killzone.com!