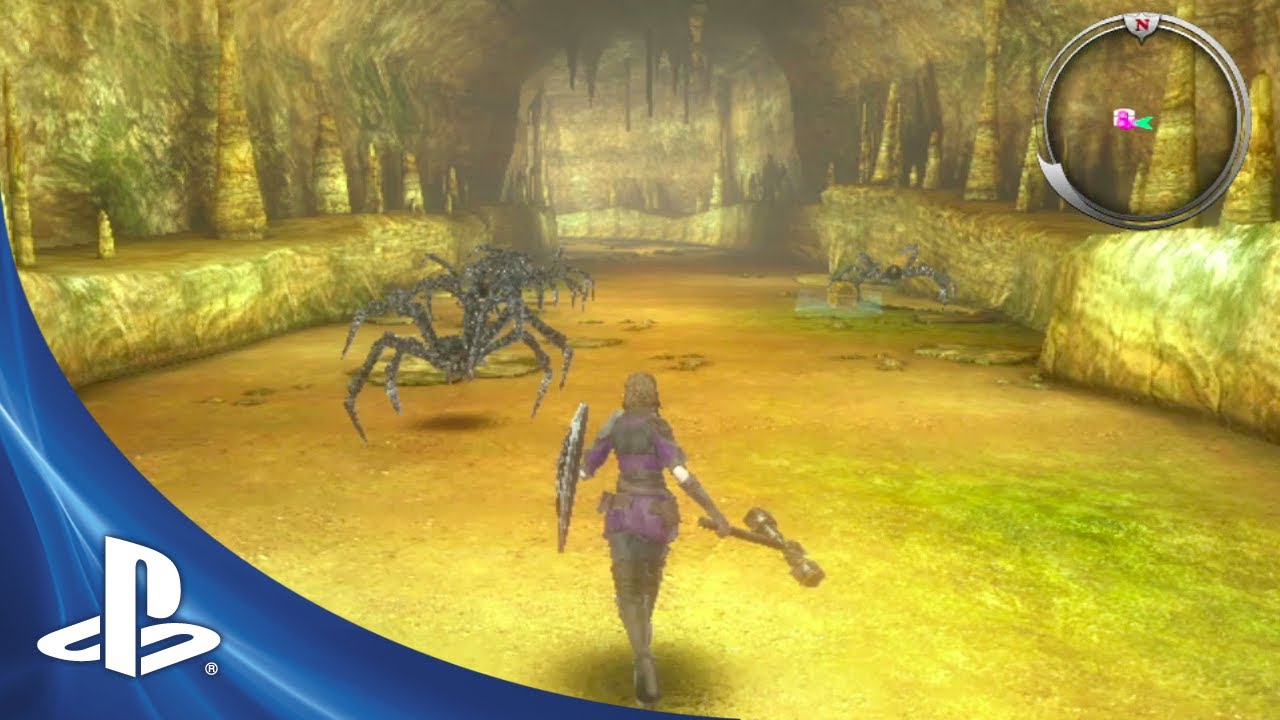 Ever notice how often JRPG heroes land in jail? It’s like a rule; the heroes can mow down any number of guards or soldiers (or monsters, or ancient cosmic horrors), but if anyone ever yells, “You’re under arrest!” or “Take them away!” or even just “Freeze!”, then the heroes have to drop their weapons and assume the position. Of course, they almost never stay in jail for long.

Usually, someone lets them out, or they find a secret passage, or they overpower their one inept guard, and then it’s just a short walk to the box with all their stuff in it, if the guards even took their stuff in the first place. Of course, you couldn’t have a whole RPG where the heroes stay in prison… or could you? And if so, what would it be like? Vita owners can find out on October 15th, when Valhalla Knights 3, a game that takes that question and runs with it, comes out on both retail shelves and PlayStation Store. The whole action-RPG is set in a medieval prison called Carceron, a converted fortress surrounded by war-torn wildlands.

Prisoners roam the halls, grounds, and dungeons at will, with the guards walled off and watching from out of sight. Within the prison, the inmates run their own society, complete with shops, guilds, and… other establishments we’ll get to later. Ruling the prisoners are the Families — organized crime syndicates — each with their own laws and territory. Above them all is the Emperor, an infamous, warmongering tyrant. He believes that the prison holds a legendary treasure, one so priceless that he’s already torn down kingdoms in search of it.

The main character’s name, gender, appearance, voice, race, and job class are all up to you, with job classes ranging from traditional Fighters, Mages, and Priests, to more distinctive classes such as Ninja, Samurai, and Amazon. As a veteran from the losing side of the Emperor’s war, you’ve been forced into servitude by a magical curse called the Mark of Death. Your task is to infiltrate the prison — disguised as a newly arrived prisoner, aka “fresh meat” — and find the treasure before the Emperor gets there himself.

To do that, you’ll need to get in good with the prison’s most powerful Families, by carrying out their dirty work in the form of quests and favors. Build a reputation, and ordinary prisoners will ask for your help, too — sometimes to find a lost heirloom or clear out monsters, other times to kill someone who might not even know why. What helps Valhalla Knights 3 stand out is its harsh tone. Every facet of the game, from its mission structure to its steep difficulty and lack of an autosave (Save often!), reminds you that you’re trapped in a brutal system, under constant watch, forced to kill or be killed. You’ll carry out orders to hunt down your fellow prisoners whether they deserve it or not, and even when they do, they still have loved ones who’ll miss them.

Most of the time, you’ll have no choice — you’re under the Mark of Death from the start, and the Emperor can kill you with a thought if you disobey him — but is that enough of an excuse? Is even your life worth doing what you’re forced to do? Valhalla Knights 3 makes you question that, and if you’re into moral discussions, it’s worth playing for that alone.

After hours, you can soothe your guilty conscience by visiting the prison’s Light District. Carceron is co-ed, and some of its ladies are gainfully employed in the District’s classy guilds and shops. Find a girl you like, make sure she isn’t spoken for, frequent her business, get to know her, and bring her favorite gifts — and she just might help you find a brief escape from the prison’s harsh reality. Bond with her closely enough, and she’ll even follow you into battle. And it goes both ways, too; you can romance and recruit characters of both genders, regardless of your own. Speaking of recruits, the gameplay revolves around party-vs-party brawls. No prisoner survives alone for long, and so as you go, you’ll be able to join with NPC prisoners to form your own clan. You’ll lead up to seven characters at a time, almost all of them customizable, into battle against enemy clans and monster packs. The 7-on-7 battles unfold in real time, with the player able to swap characters on the fly and issue group commands from anywhere on the field.

Each clan member also has his or her own personality, which affects their behavior in battle — so you might not want to make the team hothead your healer. You can take your party online, too, and fight other players’ parties in arena battles. (The North American version adds network play and leaderboards on top of the original Japanese version’s ad hoc play.)

As much as I love traditional JRPGs, it’s nice to see one do something different every now and again. I like Valhalla Knights 3 because it combines an interesting setting and atmosphere with the kind of tough difficulty I grew up with. As I write this, we’re just about set to launch in North America on October 15th on both retail shelves and PlayStation Store, for $39.99.