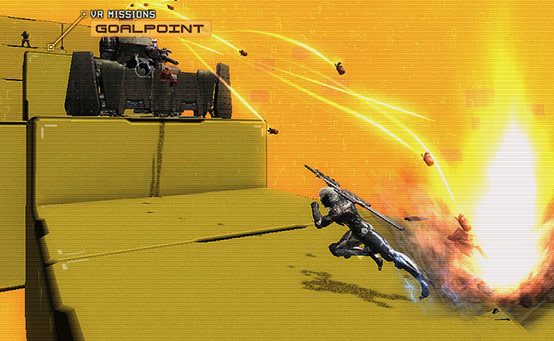 Metal Gear Rising: Revengeance is, in essence, a best of both worlds. Combining the top-notch action expected from the over-the-top experts at PlatinumGames combined with the deep storytelling and rich narrative of Kojima Productions, it plays to all its strengths. It is a return to form for some, with such classic Metal Gear appearances like Codec calls, Metal Gear Ray, High Frequency Blades and the titular character, Raiden, but infused with new elements like new villains, new allies, and the much-anticipated Blade Mode (try it out now in the demo available on PSN).

But what I’m excited to unveil today should be an old favorite for any Metal Gear fan, PlayStation-exclusive DLC VR Missions! Adding 30 all-new missions to the game, featuring that classic VR/Virtual Reality look inspired by the original Metal Gear Solid: VR Missions, the pack is pure, uncut gameplay that pushes Raiden’s Cyborg body to its limits.

Featuring a mix of combat training, tactical maneuvering, stealth-based approaches and more, these missions will both provide practice in which to hone your skills in original stages not seen the in the game’s campaign, and feature an eclectic mix of challenges that any veteran of METAL GEAR SOLID 2: Substance or METAL GEAR SOLID: VR Missions would come to expect. And, in an interesting twist, you’ll be able to take control of the much loved/hated Dwarf Gekko in the VR Missions.

I look forward to seeing your best combos and highest scores on our official MGR Facebook page and Twitter page! And don’t forget to take the blade into your hand and Cut What You Will, starting February 19th!