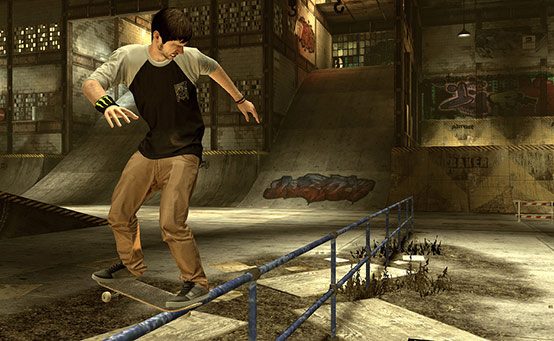 Hi everyone. Finally, we can talk about Tony Hawk’s Pro Skater HD for PS3. We are so grateful for everyone’s patience on this, and we want to make sure you all know that everyone at Robomodo and Activision has been busting their butts to get it out there. Now we can safely announce that after a lot of hard work, sweating and some crying (just a little), the game will be released August 28th on PSN in North America.

Game development is probably the hardest form of entertainment to put together, and making sure a game plays well across different machines is way tougher than anyone can imagine. If there was a “Make PS3” button, we would’ve been tempted to hit that a long time ago. But we wanted to take the time to fix a few things and make sure that the PS3 experience is everything it can be.

The wait has been excruciating for us. We know that the Tony Hawk’s Pro Skater series has historically been very tightly tied to PlayStation consoles. For me, it was a key game in my career. In 1999 I had just left my first game development job, so I and a few others broke off and started a new studio. The day we left, we were at a friend’s house and he brought out Tony Hawk’s Pro Skater for the original PlayStation. We popped the disk in, and I immediately felt like this was the game the system was made for. There were plenty of other great games on PlayStation, but it felt like Neversoft crafted this one specifically for this hardware. My statement at the time: “I would kill to make a game like this!”

Now fast forward 13 years, and here we are with Tony Hawk’s Pro Skater HD for PS3. It’s the best parts of the first two games in the Pro Skater series combined with the polish and technology of 2012 – and online play. Even better, DLC is coming that includes levels from THPS3, new pros, and the revert! It’s truly a game that we feel brings two generations of players together, and both will feel like it’s “their game.”

By bringing this to the PS3, it really feels like we are bringing both the Tony Hawk series and PlayStation gaming full circle. We can’t wait for you to start playing and destroying each other’s scores! If you find us online, please be gentle.

Here is a full list of features for THPS HD and some info on the upcoming DLC: