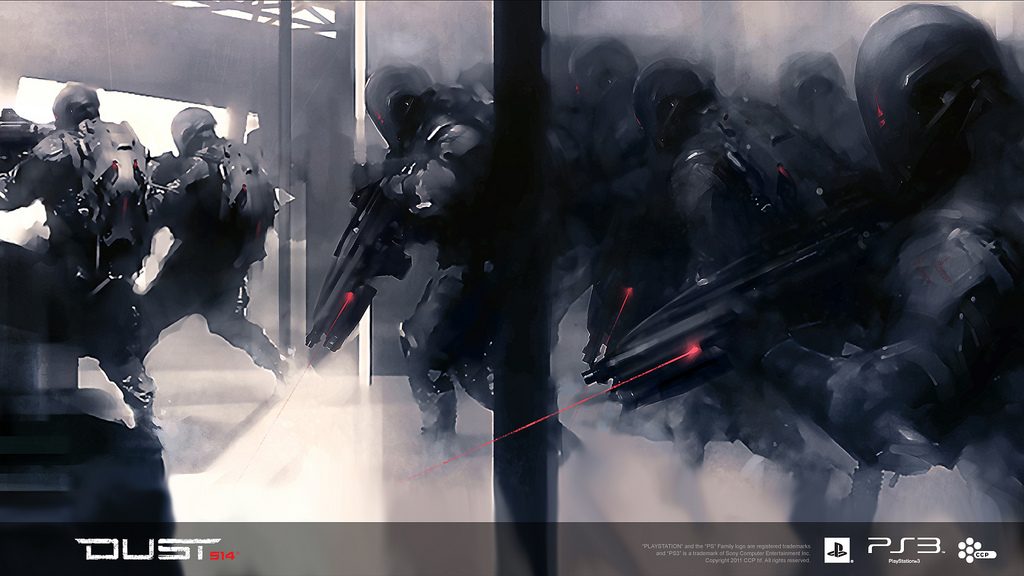 The handheld weapons are a key part of any MMOFPS and DUST 514 is no exception. There were a few things that were very important to us.

Firstly, we wanted to avoid the feeling of “Vietnam in space” that you sometimes see in sci-fi games. The goal was to create weapons that had recognizable roles but used more advanced technologies than the equivalent weapons of today. The power of these guns would tear apart a modern day battlefield. In DUST 514 the only way your mercenary can survive the power of these weapons is due to the advanced shielding and armor of the dropsuits they wear. Without them, simply firing these weapons would severely injure or even kill you!

Secondly, it was important to us that the weapons felt like a natural part of the EVE universe. In the same way that the ships in EVE have distinct racial designs and specialties, the weapons of DUST 514 had to encapsulate the values and technology of the race that created them. The ruthless efficiency of the Caldari, the progressive aesthetics of the Gallente, the resilience and resourcefulness of the Minmatar as well as the proud arrogance of the Amarr Empire. All of this had to be communicated through the design of the weaponry; the different styles should be evident when you look at the three examples below.

What we didn’t want to do though, was to limit players to the use of one racial type. After all, you are a mercenary, so you use what works best for the job at hand. This way players are able to use a variety of different weapons to find what suits them best, regardless of its origin. Players are able to use different classes of weapon in different load outs so that they can make meaningful tactical choices and can respond to changing situations on the field of battle. There are three basic weapon classes, light, heavy and sidearm, and here we’re going to take a look at some of the weapons in these classes.

Light weapons are probably the most common on the battlefield and for many players the light class will be their primary offensive weapon. The Gallente G75-VLB Plasma Assault Rifle is the perfect example of this. A solid all-purpose weapon, effective at short to medium ranges it is very flexible and comes in a number of variants: standard, breach, tactical and specialist. This allows the player to select the style that best suits them: trading fully automatic fire for targeted bursts, and lower rates of fire for increased accuracy over range amongst a variety of other benefits and trade-offs.

Conceived by Duvolle Laboratories, a corporation best known for its ceaseless R&D, the G75-VLB solves many of the problems inherent in mass-manufactured plasma weapons. The result is a weapon that offers improved accuracy and greater containment field stability (which equates to faster, longer bursts of fire) than anything in its class.

It is a magazine-fed, short-to-mid range weapon offering fully automatic fire. Charged plasma munitions are pumped into a cyclotron that converts the plasma into a highly lethal bolt before it is expelled from the chamber. Upon impact with the target, the magnetic field surrounding the bolt collapses, venting superheated plasma onto the contact point.

Heavy Weapons are a different animal altogether. They can only be wielded by those skilled enough to use heavy dropsuits which immediately makes them a more specialized choice. They also tend to utilize a high amount of dropsuit power grid and CPU systems making them unsuitable if you favor a more “generalist” approach to your weapon and equipment load out. They are however devastating in the right hands. Nowhere is this more evident than in the DCMA S-1 Forge Gun. This Caldari built ordnance is an incredibly powerful anti-material weapon with only one purpose, engaging and destroying hostile Heavy Attack Vehicles, a job at which it excels.

Adapted from Deep Core Mining Inc.’s proprietary technology, the DCMA S-1 subverts conventional expectations of what a man-portable anti-material weapons platform is capable of. Despite its excessive weight and extended recharge times, the “Forge Gun” as it has become known, is regarded as the most devastating infantry weapon on the battlefield, and an invaluable tool for those capable of wielding it.

Powered by a Gemini microcapacitor, the Forge Gun utilizes a stored electric charge to fire kinetic slugs at speeds in excess of 7,000 m/s, enough to penetrate even augmented armor systems. During the pre-fire charge, the forward armature locks into position, stabilizing the magnetic field and helping to shield the user from backscatter and the excessive heat produced. Power generation remains the single largest drawback of the current design, the onboard capacitor requiring a significant amount of time to reach full power after each discharge.

Lastly, we have the sidearm class. Don’t be fooled by their size, these are very dangerous weapons in the right hands. Often used as a backup weapon by frontline assault troops they really come in to their own when providing a close range infantry combat solution for players in highly specialized roles (such as those using a Forge Gun). A favorite amongst these is the CAR-9 Scrambler pistol. This Amarr weapon, whilst hindered by a low ammunition count, is extremely high on power. Accurate shots with the CAR-9 will tear through shields and armor. It is particularly effective when striking the head due to its high damage output and the thinner armor plating in that area. This last point makes it a particularly popular choice for highly skilled players.

The Scrambler is a semi-automatic pistol originally designed and manufactured by Carthum Conglomerate. A small-scale directed energy weapon, the CAR-9 produces a laser-induced plasma channel capable of dealing short-range pin-point damage to a target.

Power consumption is excessive, but The CAR-9 addresses this via a rear-loaded fuel cell, allowing cells to be exchanged quickly and easily once exhausted. Moreover, advances in the polymers used in the weapon’s construction have greatly reduced heat build-up and improved heat dissipation, resulting in improved reliability over earlier modules.