Drink Up inFAMOUS: Festival of Blood on Tuesday 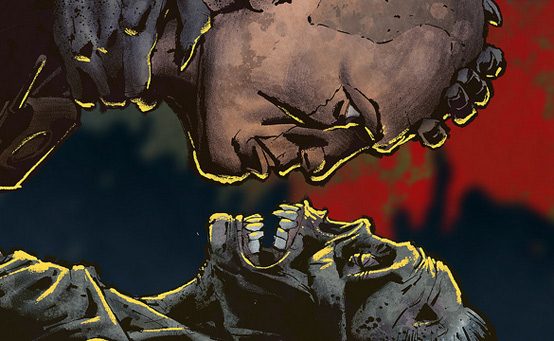 Before you get your hands on the game, we had Animation Director Billy Harper and Marketing Director Ken Schramm pack their bags for a whirlwind three-day tour spanning 5,668 miles, two coasts, three cities, and over 20 interviews with press from North America and beyond. It was an amazing couple of days of sharing the latest adventure in the inFAMOUS universe.

We have been pretty quiet about Festival of Blood since we teased you with a clip revealing Bloody Mary at PAX. Since then we have been hard at work crafting this next adventure, adding in all the final details and finishing touches on this standalone game to make the perfect purchase right in time for Halloween. This press tour allowed us to pull the curtain back and give one big preview before the game comes out next week. Billy and Ken covered tons of the new features in Festival of Blood, some of which we will cover here.

With a totally new story in Festival of Blood, of course we had to give Cole a totally new set of powers. One power that fans have always wanted in an inFAMOUS game has been the ability to fly, and with Festival of Blood we thought it was time to give Cole the chance to spread his wings. Bat wings, that is, with a new power called Shadow Swarm. While Shadow Swarm allows you to experience New Marais in a whole new way, it does come at the expense of the innocent people walking around in the night as you must feed upon them to fuel your flight.

Speaking of Pyre Night, all of New Marais celebrates this hallowed night by shrouding the entire city with banners, fireworks, and pedestrians dressing up in the streets. The look of the Pyre Night comes from Sucker Punch’s City Team spending the summer dreaming up the spooky street party that features surprises around every corner. The abandoned subway lines of New Marais have been converted to macabre underground catacombs. Stepping into these dark corridors would leave anyone unsettled, even more so when you find out that Bloody Mary’s minions have been crawling around inside them for years.

User-generated content (UGC) is a key part of the inFAMOUS universe, as you can see from our Cole’s Missing Mission Contest (the grand prize winner receives a $1,000 PlayStation Store gift card!), and we haven’t forgotten this feature with Festival of Blood. Over the last couple of months we have been listening to your feedback and playing all the missions we can from the community and the one thing we have been seeing is the desire to create strong narrative missions. To help users tell their stories, we are happy to add the new 2D cutscene tool with Festival of Blood that allows you to create comic book-inspired cutscenes in your missions. You now can create intro sequences, provide key story details mid-mission, or end your mission with a bang. Along with the 2D cutscene Tool, Festival of Blood brings a whole new set of gory assets to the UGC universe and you can now design missions with as many fiends and harpies as you want.

If you haven’t had a chance, read some of the previews we have listed below:

Stay tuned to infamousthegame.com and join our forums on SuckerPunch.com for future updates on inFAMOUS: Festival of Blood. Also follow us on Twitter, @SuckerPunchProd, and check out our Facebook Page.