Into The Pixel 2011: PlayStation Artists Honored 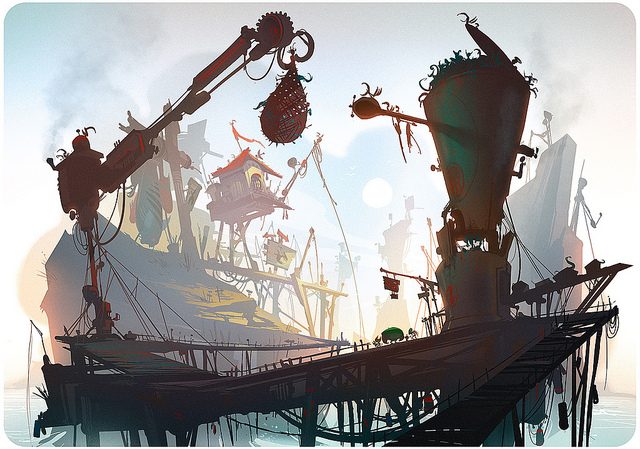 Today, the Academy of Interactive Arts & Sciences (AIAS) and the Entertainment Software Association (ESA) announced the winners for the 2011 Into The Pixel collection, the only juried art exhibition that brings together experts from the traditional fine art world and the interactive entertainment industry to display and discuss the art of video games. We’re excited to share that art from four exclusive PlayStation titles have been chosen to be included in this year’s list of winners – UNCHARTED 3: Drake’s Deception, Ratchet & Clank: All 4 One, Killzone 3 and God of War III. The ITP has selected only 17 pieces of art to be included in this prestigious collection, so this is a true honor for SCEA and our developers.

Check out the art below to see the winning pieces from our SCEA developers as well as a few words from the teams.

“The Pelican Inn” by Andrew Kim

Everyone at Naughty Dog is extremely proud to have one of our artist’s works of concept art accepted into the Into the Pixel 2011 exhibition! This is the first time we’ve had a piece of art selected and we couldn’t be happier for Andrew Kim and his piece, The Pelican Inn! I caught up to Andrew after giving him the great news and wanted him to say a few words about his art and the honor of being selected for the Into the Pixel 2011 exhibition.

“The Pelican Inn is one of the first scenes you’ll see in UNCHARTED 3, where Drake will toughen up his fists for the first time. It’s a compact space with mostly drunken brutes and hustlers. What a perfect place to start a brawl!

When I was first introduced to this level, I was amazed at how a typical London pub has so many stories contained within itself. The mix of vibrant colors from the stained glass and muted colors of antique furniture with all kinds of stuff behind the bar, old frames, and personal messages on the wall… wow, I really could picture so many things that might have happened in this pretty small, compact space. We decided to give the pub a boxing theme, as it seemed a perfect fit to have Drake and Sully brawling in a small pub that has been historically patronized by boxers and boxing fans. It definitely was lot of fun decorating the place under that theme. I paid lot of attention to the details knowing that we wanted to show a very authentic looking pub yet very suitable for our game world.

Having said this, it’s a tremendous honor to be recognized by Into the Pixel. As an artist, it’s always very fulfilling and proud when my work is liked and appreciated by an audience and such competition like Into the Pixel just adds that much more magnitude to this honor.” – Andrew Kim

Insomniac Games is extremely proud to have one of our long-time Principal Artists featured in the 2011 Into the Pixel exhibition. David Guertin has been with Insomniac for over a decade, and drew the original concept sketches of one of PlayStation’s greatest heroes, Ratchet. This marks the second time he has submitted artwork to Into the Pixel and the second time one of his pieces was accepted into the exhibition (His first, the Viper Caverns from Ratchet & Clank Future: Quest For Booty can be seen here.

“Inspired by childhood summers along the New England coastline, Oktonok Cay serves as our ravaged seaport in Ratchet & Clank: All 4 One. Continuing the franchise tradition of exploring vast unique locations, we sought to capture the history and character of a weather-beaten seaside village. Complete with winding docks, alien sea life, and a bustling cannery, the area encourages players to find their “sea legs” while clobbering a host of menacing creatures along the way.

Into the Pixel continues to represent a broad range of spectacular video game illustration year after year. From gritty realism to unique stylization, ITP has always displayed a great respect for the many visual facets of our industry. I feel extremely fortunate to be included in 2011’s collection alongside so many artists I admire.“ – Dave Guertin

“‘Stahl Arms’ shows the main base of operations for Killzone 3’s prime antagonist, Jorhan Stahl. It’s remote location allows for secret testing of powerful new weapon technologies. The architecture of the complex is predominantly industrial: the dark, segmented sections contain the production facilities, while the lighter, yellow-banded sections house the R&D departments. To underline the commercial nature of Stahl Arms as an organization, part of the structure serves as commercial office space.” – Jesse van Dijk

We are absolutely thrilled here at Santa Monica Studio to have a piece in this year’s Into the Pixel 2011 art exhibit. A well deserved congratulations goes out to Tyler Breon, character artist, who created Cronos Battle, the piece that was selected. We are very proud of Tyler and the exceptional work he continues to do here at the studio.

“The Cronos Battle is another one of those epic scenes that doesn’t exist anywhere but in God of War’s insanely over-the-top universe. A monster larger than a mountain with a temple chained to his back attacking you while you try to kill him in the middle of a ravaged wasteland as enemies sprout from his skin…how could that not be awesome? Plus he’s your grandfather so it’s really twisted.”

“God of War defines the word epic and working on this game moment, for me, defined our studio. There is no quit in the Santa Monica Studio vocabulary and I have nothing but admiration for all of the hard work everyone on our team put into making this battle completely unforgettable. Thank you!”

“Finally, like any artist, I appreciate having my work liked by others! Receiving this award from Into the Pixel is a great honor, and I look forward to doing it again.” – Tyler Breon