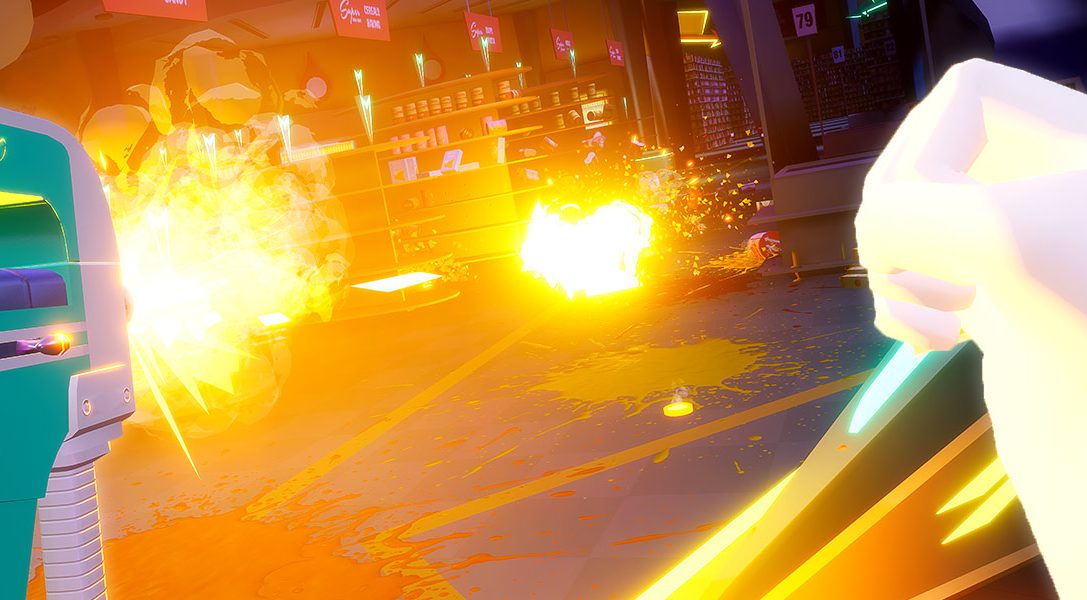 Career, jobs, power ups, customisation and leaderboards detailed ahead of next month’s launch

Shooty Fruity, the multi-tasking VR shooter, comes to PS VR this Christmas! Back in August when we revealed the game, we talked how, as the latest employee of Super Mega Mart, you must do your job by scanning, serving and packing to earn tons of deadly weaponry that will protect you and the store from mutant genetically modified fruit hell-bent on attacking you!

1. You’re not just manning the tills

We already revealed the checkout job earlier in the year and now we’re delighted to show the canteen job for the first time. Become a key component in the pre-processed food packing industry! Placing freeze dried food sachets onto the right tray compartment may seem simple, until you have an angry pomegranate firing its pips in your face.

Any more jobs than these two? Absolutely, but you’ll need to wait until launch to see…

There’s stacks of different shifts to undertake across the game, each offering three unique challenges. Adjust your playing style and approach to each job shift to complete challenges that unlock new jobs, shifts, weaponry and high-tech power ups that may turn the tide in the ages old battle of man versus fruit.

What’s more, killing overly aggressive fruit rewards you with ‘Juice’. Not just useful for tracking your high scores, Juice can be used for expanding your arsenal. Speaking of which…

3. Weapons can be bought from a vending machine

Fancy a new more powerful weapon? Visit the ‘Vendomatic’ in the employee staff room to see what management are offering today. If you have the Juice, just tap in the number and voila, there’s your new Feckler 500 Flak Cannon!

Weapons come across multiple classes, from revolvers and SMGs to shotguns and high-explosives, and they all level up in very unlikely ways…

4. Loadouts can be fully customised and tested

Different weapons aren’t just there to make you feel like a juicier John McClane. Ahead of a shift you can freely customise your loadout to strategically balance the strengths and scarcity of each weapons, with weaknesses of fruit you may encounter. Fighting a ton of armoured watermelons then you’ll probably want the armour piercing Desert Fox revolver, whereas a small army of limes really need the awesome fire rate that only a Katastrakov assault rifle can offer. Simple!

What’s more you can test your weapons on the firing range before hitting the job.

Motion control allows you to interact with things in the game in playful ways like you could in real life and this is really evident with the explosives.

Take the humble Fruitmentation grenade. Feel free to pull the pin out and throw it as normal, but why not throw two at once by pulling the pins with your mouth? Or throw a few into a nice pile and detonate them with a well-placed pistol shot? Or ‘serve’ them with your hand like a tennis ball? Totally up to you!

There’s also the C4 Slingshot. Strategically place your explosives and then kaboom – you have yourself a smoothie.

6. Chill out in the staff room

The staff room is your central hub between shifts. Customise your loadout, by new weapons or
see how you rate at the leaderboard arcade machine. Want to have a bit of a break instead? Well just kick back and have a coffee!

7. The night shift is only for the brave

Think oranges, melons and ninja limes are totally not scary? You’ve never been on the night shift checkout…

We’ll be revealing more of the game ahead of its launch on 19th December (you may want to keep an eye out around the PlayStation Experience. Just saying…!) Pre-order or pick up the game over the Christmas period to get free in-game content. Pre-orders will also get some themes and avatars thrown in too. Call it an extra Christmas present from Super Mega Mart to you!