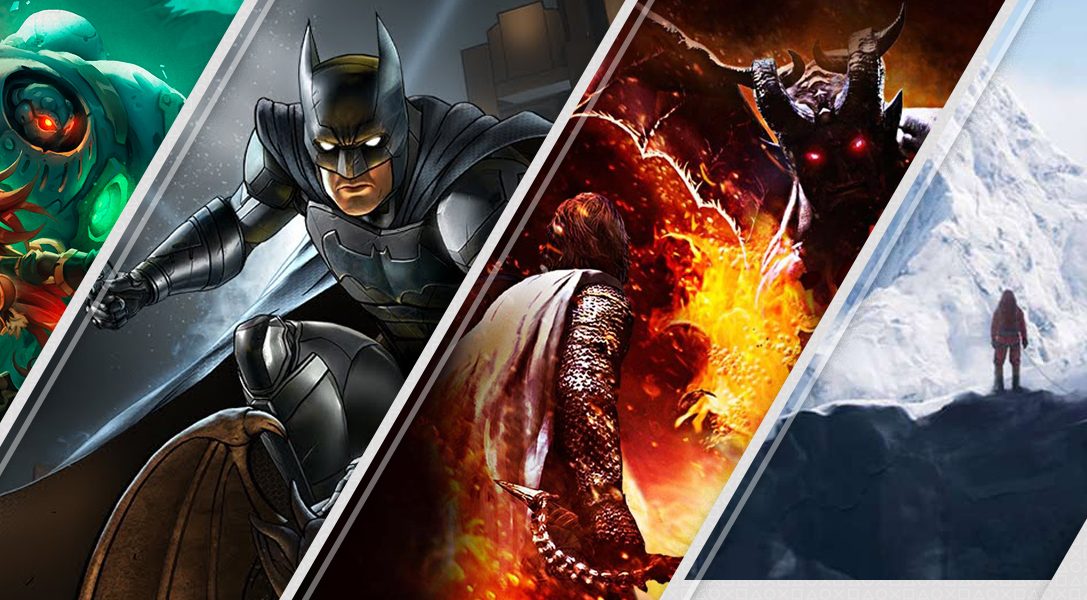 This week on PlayStation Store you’ll patrol the night to safeguard a city, climb the highest mountain, delve deep in the darkest dungeons, embark on a fantasy adventure epic and more.

Continue Batman’s story-driven adventure in Gotham with the second episode of Telltale’s latest episodic tie-in or get an intimate and awe-inspiring look at the world’s largest mountain with Everest VR. Cult comic book series Battle Chasers gets a new lease of life in PS4 turn-based RPG Nightwar, while Capcom’s fantastic fantasy actioner Dragon’s Dogma is unleashed on PS4. Get more info on these, plus all the rest of this week’s releases below!

1. Batman: The Enemy Within Episode 2

Telltale’s spectacular Batman adventure continues with episode 2, The Pact. As explosions rock Gotham, Batman races to face new foes, but encounters a force that may cause even the Dark Knight to fall. Become the Batman and make your own decisions in this new chapter featuring Harley Quinn and other familiar faces…

Ascend to the top of the world with this immersive first person experience and climb Mount Everest in virtual reality. Journey from the base to the summit through 5 interactive climbing scenes and prepare for the breath-taking views from the top. Don’t get vertigo!

The creators of Darksiders are bringing back the cult comic Battle Chasers in a new PS4 RPG. Battle Chasers: Nightwar is inspired by dungeon crawlers and classic JRPGs. Dive deep in the procedurally generated dungeons and master the turn-based chess-like combat system!

Capcom’s critically acclaimed action RPG debuts on PS4 and is a must for fans of fantasy open worlds and inventive monster designs. Choose your vocation and lead a team of NPC adventurers to tackle bosses and explore an ever-evolving world.

Upset with the rampant evil, the goddess who created the world comes up with an idea: she splits the world in two, separating all evil away from the peaceful half. All was well for a while until the evil forces found the way to reconnect both worlds, joining the malevolent world just underneath the peaceful one. This is the predicament of A hole new world. Fight with Fäy, your companion fairy, and your carefully crafted potions through the side-scrolling worlds of this 2D arcade game with its retro aesthetics. Epic bosses await you!

And here’s the full rundown of all this week’s new releases: