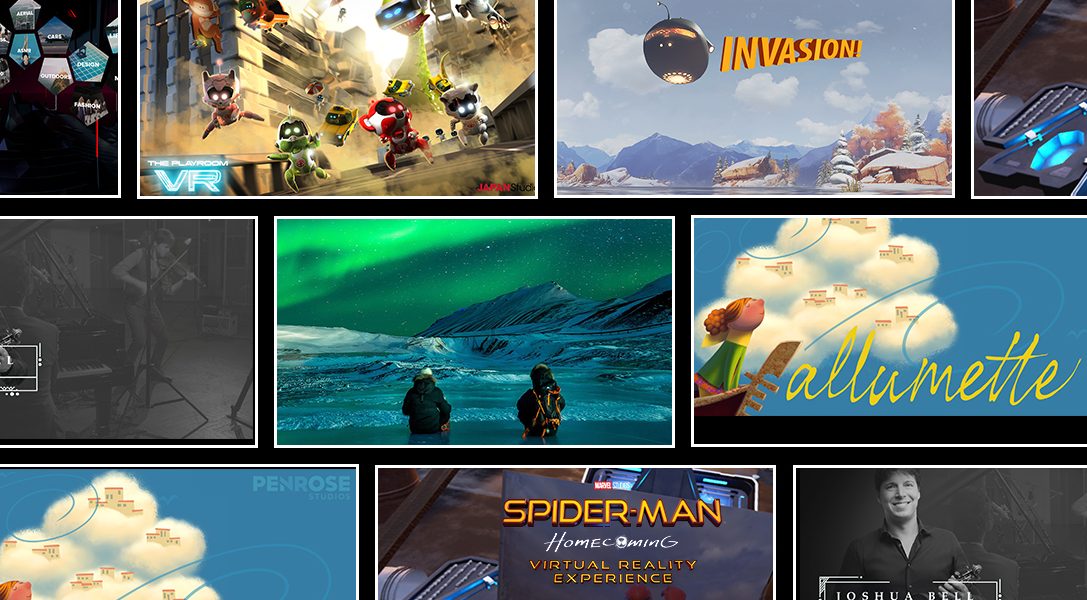 Since launch last October, PlayStation VR has opened gamers’ eyes to the possibilities of the virtual world, offering us the opportunity to experience things we would never have imagined.

From shooting giant space spiders in Farpoint, to becoming the Dark Knight himself in Batman: Arkham VR, and coming face to face with your worst fears in Resident Evil 7 – PS VR truly transports you into a new realm.

What’s more, you don’t need to actually open your wallet to enjoy some of these titles – there’s a wealth of free content available right now for you to discover and enjoy – including full games, VR experiences, and demos.

Everything listed below is available to download from PlayStation Store now. Give them a try and let us know what your favourites are.

You’d be forgiven for thinking this short, sharp mission was only available to those who’d already bought Call of Duty: Infinite Warfare. It’s not – it’s available to anyone with PS VR.

Infinite Warfare players will recognise the interstellar dogfighting and daredevil attacks on hulking command vessels from the Ship Assault segment of the PS4 game’s campaign.

As you arrive in the hangar bay, teeming with activity, you turn your head to clock mechs walking alongside you, attack craft launching and your own fighter being readied. You’ve seen it a hundred times in cut-scenes; now you’ll feel like you’re really part of it.

See the world from the perspective of one of the world’s best loved super heroes, Spider-Man.

Suit up and feel those Spidey senses tingle as you master the art of web shooting in a series of dramatic trials.

Once you get to grips with your new spider skills you’ll find yourself face to face with the Vulture. Good luck!

Perfectly encapsulating the fun of virtual reality, this collection of mini-games has something for everyone.

Newcomers to virtual reality will find it a fantastic introduction to the world of VR but there is a lot for seasoned gamers to enjoy as well.

Super inclusive and fun for all, one person wears the PS VR headset while up to four other players are able get in on the action using Dualshock 4 controllers.

This short animation from the director of Madagascar is a wonderful way to discover the immersive capabilities of PS VR.

A couple of aliens intent on conquering Earth are stopped in their tracks by two rabbits, who are blissfully oblivious to the aliens’ scare tactics.

We won’t spoil the surprise but this funny film has a real twist in its (cute, fluffy) tail…

Are you a fan of horror and the macabre? Then the Kitchen demo should be high on your to do list.

A precursor to the terrifying events of Resident Evil 7, you will come face to face with your darkest fears and discover exactly what PS VR is capable of.

You’ll discover new ways to remix and manipulate the music – the choices you make have an impact on how your final version sounds so you can let your creativity run wild!

This experience brings with it a whole new way to enjoy and music.

Taking cues from the classic Hans Christian Andersen fairytale ‘The Little Match Girl’, Allumette is a heartbreaking tale of a mother, her daughter and the sacrifice one makes for the other.

It’s a poignant demonstration of how PS VR can draw you deep into a story and gives you the chance to lean into the film set and pop your head through walls to catch snippets of conversations, as well as see more of the Venice inspired city.

For a relaxing change of pace why not give classical music a try? Sit back and enjoy Brahms’ Hungarian Dance No. 1, performed by violinist Joshua Bell and pianist Sam Haywood at London’s historic Lyndhurst Hall.

State of the art technology allows the video and audio to adapt to even the most subtle changes in your location (which is fully rendered in 3D) to deliver a truly unforgettable virtual reality experience. This one is not to be missed!

Use truth bullets to shoot through suspicious statements, unpick evidence and find the killer!

Watch out though, things are not always as they seem and the headmaster has a special punishment prepared just for you…

This short, sharp introduction to the steampunk fantasy mash-up allows you to join archer Lila and Mage Harry on their war to defend a mystical world.

In your mission you will launch arrows and cast spells to bring down enemies, battle magical creatures and take on other legendary foes.

Enter a virtual stadium, immerse yourself in the audience, and get lost in the music – this experience gives you the full concert feel from the comfort of your own home.

Wave your glow sticks and cheer Miku on – the wilder the crowd goes, the more the excitement grows and the bigger your chances of a special one to one performance!

Lens is an app that lets you watch 360° short films and there are a host of different cinematic experiences to try out.

With Lens you can discover panoramic views of the dessert, experience the stampede of an elephant herd or even dive deep into the depths of the ocean.

Brief but unforgettable experiences are on offer from Lens, the app that lets you watch 360-degree short films. As you find yourself drawn in, you can look around and drink in detail as if you were there.

Littlstar is an immersive app which focuses on bringing content from popular TV broadcasters including National Geographic, Discovery and NBC.

Unlock nature’s secrets, discover the truth about the past and relive the world’s most significant historical moments. With Littlestar, the world revolves around you.

Perfect for those just starting out with PS VR or looking to try something new, this demo offers epic tasters of some of the most popular PS VR games.

Strap yourself into the driving seat in Battlezone, become an elite fighter pilot in EVE: Valkyrie, blast your way through Rez Infinite or try the pulse-pounding rhythm horror of Thumper.

This free to play demo offers multiple experiences in one.

Strategy game Tethered secured glowing reviews from players when it launched last October and the team at Secret Sorcery were kind enough to create a free demo to ensure everyone gets the chance to experience it.

Immerse yourself in the role of a powerful Spirit Guardian, gazing down upon your beautiful land from the clouds, as you strive to restore balance and save the Peeps from Despair in this utterly engaging taste of Tethered gameplay!

This collection of mini-games has been designed to bring exercise to life and enable you to to increase your heart rate without breaking a sweat.

VirZOOM Arcade will have you cycling after bandits, swooping through the sky on Pegasus and setting up custom routines. It’s definitely one that gets the blood pumping!

This one’s not free as you need to have a copy of Star Wars Battlefront in order to play it. However, if you have Stars Wars Battlefront and you’re a fan of the franchise, the Rogue One: VR Mission is an absolute must-play and you can download it without charge from PS Store.

As a rookie pilot taking an X-Wing fighter for a spin, this is as close as it gets to a job swap with Luke Skywalker or Poe Dameron.

Not only is the cockpit of the iconic fighter recreated in full (you’re free to look around and press every button and switch), but the PS VR headset even feels like a pilot’s helmet. Just as well: as TIE fighters explode overhead and asteroids hurtle by, you’ll welcome the extra protection.

See if you can find the button that turns on the targeting computer – a nod to Episode IV’s iconic trench run finale.

This is just a taster of some of the free experiences available for PS VR right now.

There’s fresh content landing all the time, we’ll be keeping you posted with what’s new, so stay tuned for more updates!