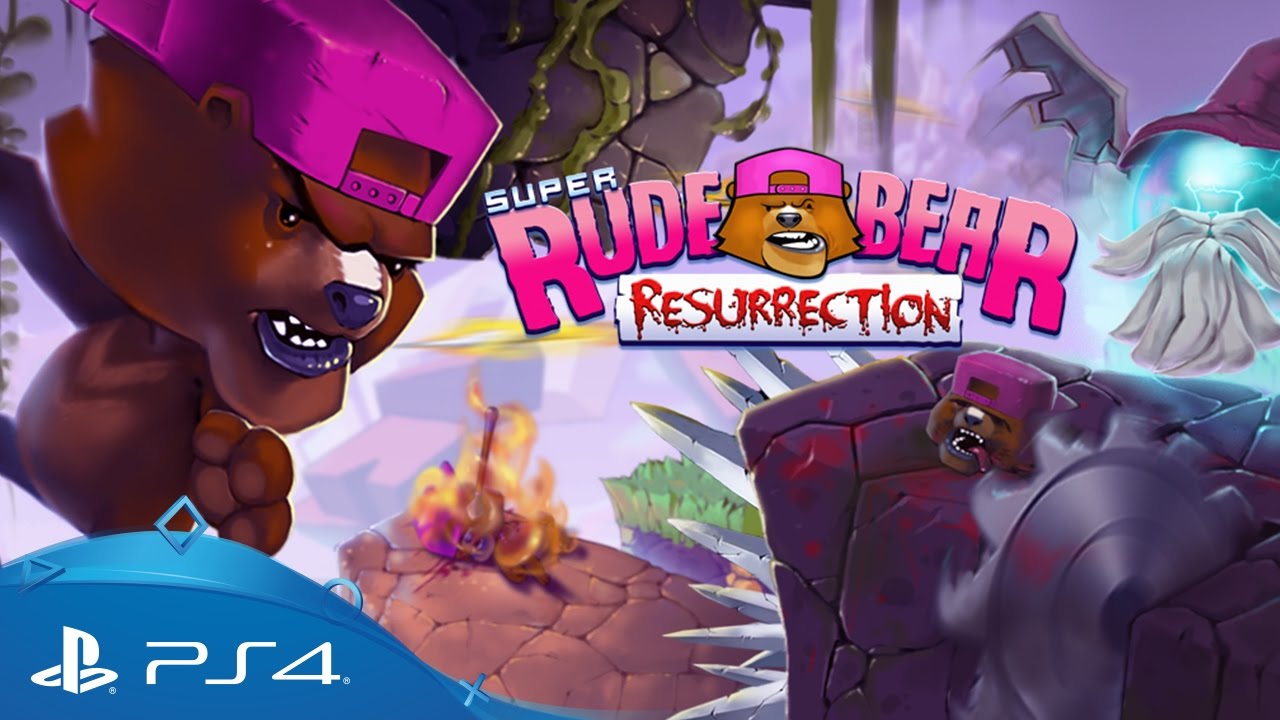 Hey, Alex Rose here, I’m the creator of Super Rude Bear Resurrection, which is coming to PlayStation 4 on 2nd May!

SRBR is a super ridiculously hardcore platformer, but one that anyone can beat! When you die, you can jump on your previous bear corpses and use them to get ahead. You can push them around, use them as meatshields, press buttons with them and so on, and every death makes the game just slightly easier.

If you get crushed by a boulder, next time it’s slightly slower. Die on an axe – your corpse gets stuck to the blade. Got killed by a liquid nitrogen missile? Your frozen body becomes a floating platform to protect you.

Eventually, die enough, and you’ll be able to beat any level.

But for those of you who can’t resist a challenge, it’s actually possible to beat the entire game without dying. It’s just insanely difficult. The game is super fair – you never get killed out of nowhere and all the hitboxes are super lenient, but the levels become nightmarishly hard. And you’ll have to live through that nightmare if you want to unlock SRBR’s Platinum Trophy.

I grew up playing super challenging ’90s platformers and amped the toughness up to 11. Normally when you’re designing a game, you have to design based on the least skilled players and make sure the game is possible to defeat by most people.

Not with SRBR – I designed the game so that it’s physically possible to beat without dying, and then focused on making the game autobalance with each death. But if you turn off corpses, you’re left with a challenge so difficult you would normally only ever find it in a romhack.

The game is also speedrun friendly. All randomness is all based on your corpse count, so as long as you never die, every run is the same. You can also turn off randomness completely in the menu. There’s a Practice Mode for practicing specific sections, a quick load menu that allows you immediate access to any level from the pause menu, leaderboards and whatnot.

I’ve been working on SRBR for three years, obsessively tweaking every little detail in the design to make everything feel as good as possible – to me that is the number one most important thing in a platformer, it must feel perfectly fluid. It has to feel like your fault when you die. Your character should be an extension of yourself.

But moreover, we took the time to make sure the sound is incredible. Sound and music are super important to me, so I teamed up with my favourite UK Grime producer, Deeco, who’s made a 73-song soundtrack for SRBR. Every single level has a unique track, and (I’m allowed to say this because I didn’t make it) – the soundtrack is incredible. Deeco is an absolute genius who never ceased to surprise me with how much awesomeness he could create.

Not only that, but the sound effects were handled by Pierre-Jean Griscelli, sound designer extraordinaire from Batman Arkham Knight.

My number one priority was to make sure the game sounds and feels awesome, and I believe I’ve achieved this – I’ve sunk in countless hours playing it over the past three years and I don’t just develop it, I play it obsessively.

Feel free to ask anything you want in the comments! I’ll be happy to answer.