How multiplayer works in side-scrolling ‘Souls-like’ Salt and Sanctuary

If you’re not yet familiar with us or our game, hi! We’re Ska Studios, a husband and wife team that’s been making deliciously bloody indie games for like eight years now (what!?).

We’re working on a game called Salt and Sanctuary, an insanely ambitious platformer that aims to capture the “Soulslike” genre, faithfully reimagine it as a mechanically solid 2D platformer, and explore and develop the interplay of wonderful mechanics and themes like difficulty and danger, stylistic action and complex combat, and diverse, branching, and versatile character building.

One of the coolest things about RPGs is the party dynamic, but up until about a year ago Salt was purely a game of solo exploration. We wanted to explore cooperative multiplayer, and perhaps some PvP, but how?

Online multiplayer was (and is still) a crazy dream of mine, but trust me: online gameplay is an absolute nightmare to implement anywhere, and PS4 development is still pretty new to us. So we settled on the idea of sellswords.

Salt and Sanctuary centers around sanctuaries. A sanctuary takes on the role of a bonfire, archstone, Hunter’s Dream: it’s a place of rest, replenishment, and — when things go south — respawning. In Salt and Sanctuary, sanctuaries can be populated with NPC villagers. Tiny statues are scattered throughout the world, and placing a statue on a sanctuary’s altar permanently summons a villager of that type to the sanctuary.

The sellsword facilitates cooperative play. Placing a sellsword statue on the altar will summon a sellsword. Telling the sellsword that you’d like to “Hire” prompts a second player to pick up a controller. This player now gets to pick anyone in his or her roster, jump in, and get jolly!

Having a companion present tweaks a few things: enemy health is scaled up a hefty bit, and enemies will do a little extra damage. Prayers of healing aid cooperative players within a radius. A Revive prayer might even make an appearance. The synergy is something I wanted to experience in Salt years before implementing coop, and Michelle and I always tend to balance out our builds like we would in Dark Souls 2: tank and caster style. 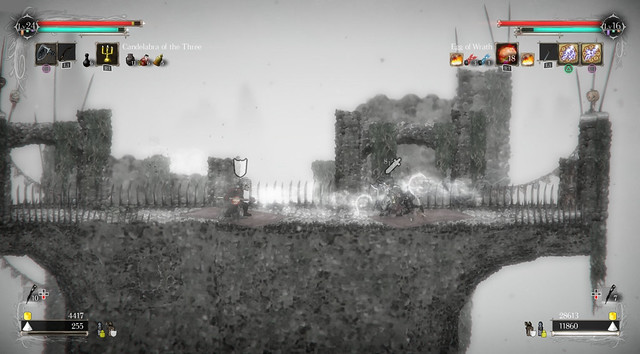 But the sellsword doesn’t just connect adventurers with brave companions; he also sells Eggs of Wrath. Crushing an egg in the universe of Salt is a tradition of war, meant to signify the commencement of battle. As such, crushing an Egg of Wrath immediately initiates PvP. Once battle has begun, it cannot end until someone dies. But fear not! Your fallen companion will be found alive and well in the next sanctuary or shrine you visit.

PvP in Salt and Sanctuary is an interesting beast. Not all fights will be fair, but all fights tend to be interesting. Stamina and focus (spellcasting) management, parries and counters, crucial I-frames, and weapon ranges are all super important. And because of the nature of the Egg of Wrath, you can pretty much spring PvP on your ally anywhere. Boss fight? More like three-way free for all! Need a human punching bag to try out a new weapon you just crafted? Crush that egg. 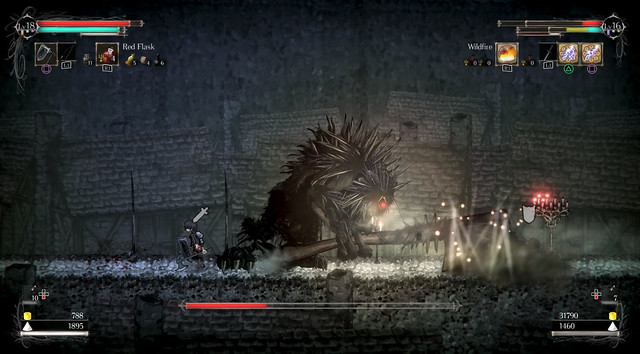