Introducing Party Hard, the story of a guy who just wanted some sleep 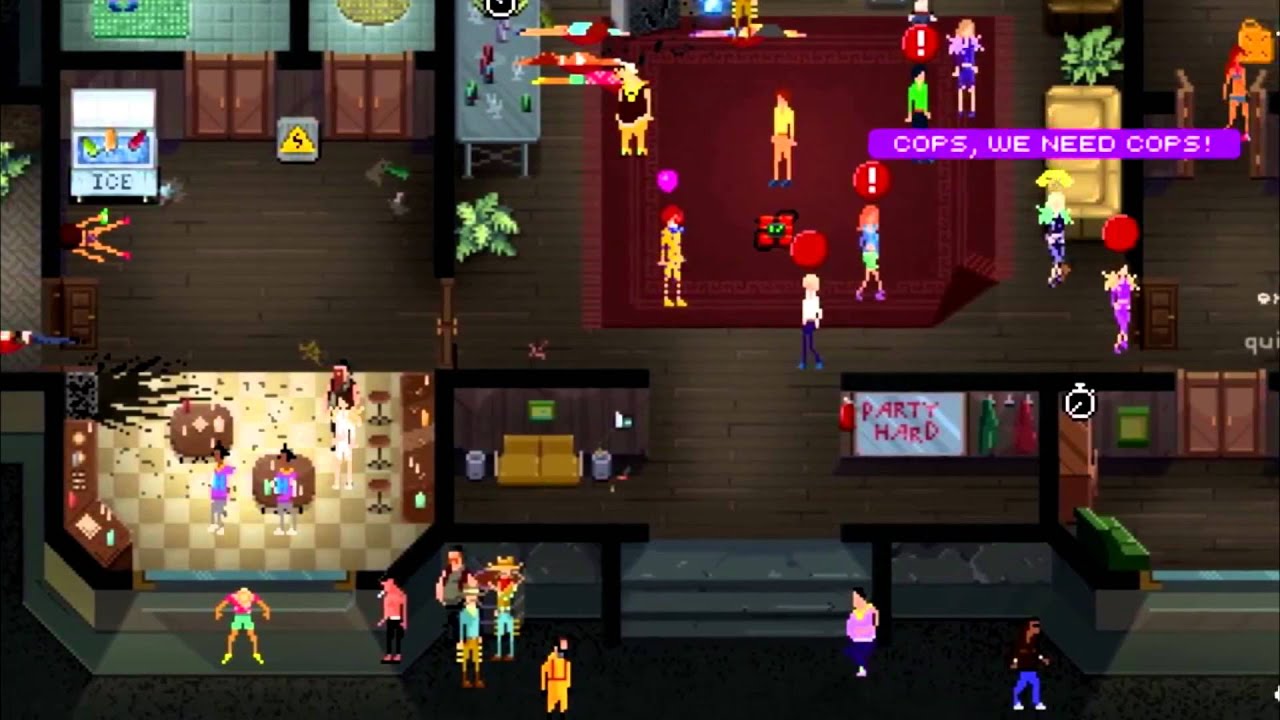 Hi everyone! My name’s Alex Nichiporchik and I’m the CEO of tinyBuild. We’re an indie game developer and publisher. I’ve been working really hard as a producer on many of our titles, and you’re going to be hearing a lot about us this year as we begin our assault on PlayStation, with around half a dozen games being prepared for your DualShocking fingers.

We’re going to kick off the assault with a game that is quite different to anything you’ve played before. The game is called Party Hard, it was developed by Ukrainian studio Pinokl Games, and I can now reveal that it’s coming to PlayStation 4 in the Spring!

He just wanted some sleep…

It’s 3am. The bass is unbearable. You just want to get some sleep. Who hasn’t been in a situation like that before? A year ago I was, and I kept on plotting ridiculous scenarios for how it could play out. In the real world, of course, the best thing is to call the police and let them deal with it. It wasn’t until a few months later that I saw the prototype for Party Hard, and an idea was born.

This idea manifested in a video game about a guy who really wants to get some sleep, and finally snaps, grabbing a trusty knife and mask and heading over to stop the party.

But once he’s finished with his literal Murder on the Dancefloor, he realises he has quite the knack for stopping parties. So he decides to go on a rampage around the U.S., ending parties left, right and centre.

Don’t be fooled — Party Hard is an extremely silly game, despite its rather dark storyline. You’ll find yourself dancing with bears in sunglasses, poisoning the punch bowl, setting mantraps for unsuspecting party goers… and then running from the cops when it all goes pear-shaped.

All you have to do is kill everybody at each party, but that’s easier said than done, as there are usually dozens of people swarming around. Fortunately, you don’t just have your knife — there are various traps around each level that can be used to end numerous lives.

There are 19 different parties to crash, each with their own unique traps, party people, and problems. Maybe you’ll throw someone over the edge of a skyscraper, or start a conga line and stab each person one by one as they dance unwittingly along.

Each party is semi-procedural, meaning that every time you play, it’s slightly different. The people at the party will be mixed up, and act in completely different ways. Meanwhile certain rooms and traps in each level will change. Maybe this time you’ll be able to slap a bull to run a bunch of people over. Or perhaps a gasoline can will spawn and you’ll be able to burn the place down.

There are different characters to unlock too. You start off with the guy who just wants some sleep, but eventually you’ll unlock a cop who can frame other party goers, a ninja who can hide in the shadows, and a butcher… with a chainsaw. Only the best killers will work out how to unlock all the characters.

And here’s the kicker: If you livestream the game using Twitch on your PlayStation 4, the people watching your stream will be able to enter commands into the live chat, and mess around with your game! Maybe they’ll vote to send a SWAT team into the house to catch you, or unleash an army of angry bikers on the party.

So that’s Party Hard! We’re excited to start our PlayStation story with such a ridiculous game, and we can’t wait to get the game into your hands very soon.