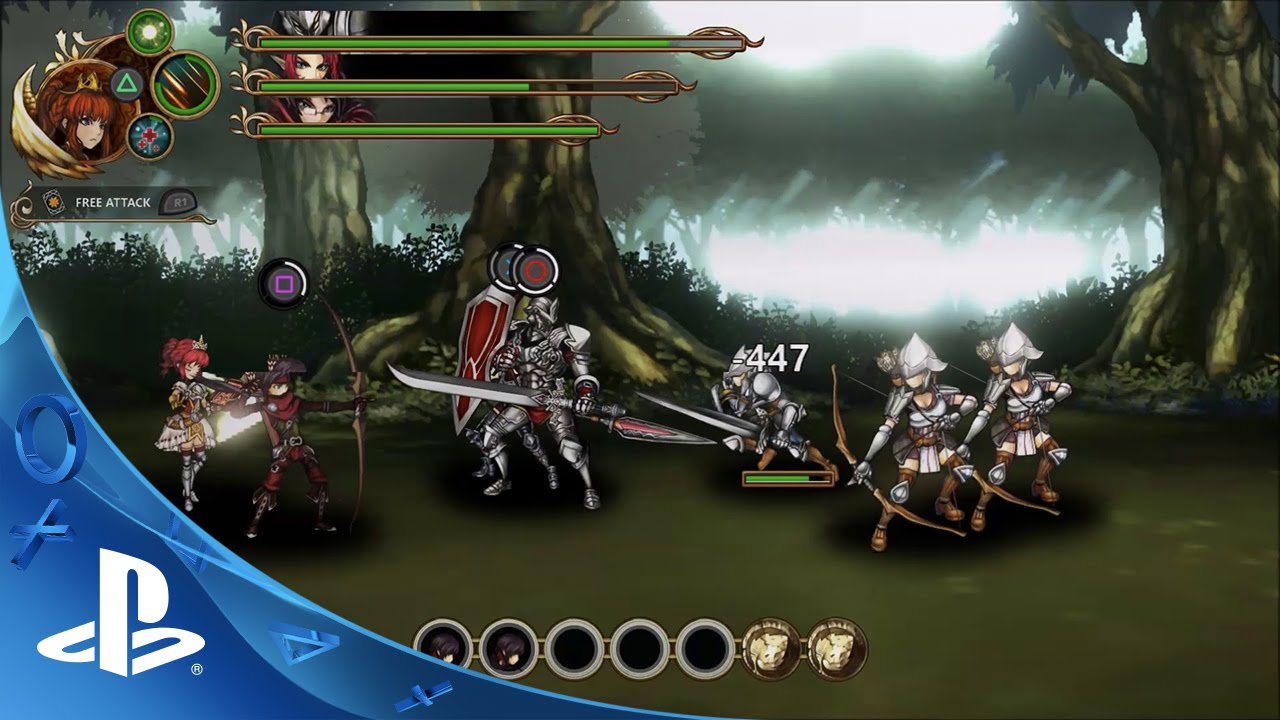 Fallen Legion begins with Princess Cecille standing on a battlefield, with her weary army behind her, gazing into an approaching beast brigade. The King of Fenumia’s threads of life were cut short and he passed on relics as well as the responsibility of ruling her crumbling country to Cecille. Among the king’s effects is a talking book that has the power to breathe life into weapons. This enigmatic Grimoire knows the truth about Fenumia and her home isn’t the idyllic kingdom the citizens believe it is.

I love RPGs and fighting games. This shows in Fallen Legion’s unique battle system that blends both genres together. Cecille brings up to three Exemplars — weapons turned into soldiers by the Grimoire — in battle with her. Zulfiqar is heavy hitter who can also protect other Exemplars with his sturdy shield. Longinus is a damage dealer with multi-hit spear strikes. Apollon can debilitate enemies with status effects. Each character has their own action bar and it’s possible to start slashing with Zulfiqar then switch to Apollon to shoot a barrage of arrows.

Actually, we want you to do that. If you cancel an attack you can create a powerful link combo which unleashes an Exemplar’s secret techniques. Zulfiqar can smite enemies with his shield and Longinus can drill enemies with her spear. Each character also has a deathblow and whoever lands the last attack on the combo bar delivers their super move. If you want to rend an enemy with Zulfiqar’s Sky Splitter, have him as the last attacker or make Longinus last to pierce all enemies with her spear.

Pressing the “L1” button makes characters block and if you time a block right before an enemy strikes you’ll trigger Perfect Guard which can stagger enemies or reflect projectiles. Ever wanted to send a dragon’s fireball back at it? You can do that in Fallen Legion!

While Cecille cuts through goblins, she also has to rule Fenumia. Players have to make split second decisions and choose which factions to side with. Your choices affect how the people of Fenumia think of you and what buffs your Exemplars receive in battle. You can get life extending vitality boosts, an extra deathblow slot on the combo bar or a card that allows you to go wild and attack non-stop for one battle. All boosts last for a single stage and if you make different choices, the way you fight monsters will change considerably.

There’s so much more I want to say about Fallen Legion like how we create our hand-drawn artwork, what other Exemplars you can summon, and who our story writer is. Stay tuned for more information soon.