Welcome to the circus, PlayStation fanatics! My name is Rick van Ginkel, Designer and Producer at independent studio Self Made Miracle. I am super-excited to announce that, together with indie games label Team17, we will bring our debut title, Penarium, to PS4 on 22nd September!

Penarium is a frantic 2D arena arcade game where you take on the role of quirky antihero, Willy. Willy is trapped in a crazy circus show where he needs to run, jump and avoid an array of killer death-traps while being cheered on by a sadistic crowd that’s out for blood – his blood.

With Penarium, we strived to create a challenging single-screen platformer with super-tight, pick-up-and-play controls that provide a lot of depth and variation through various single and multiplayer game modes.

In Campaign mode you will make your way through Willy’s tragic story by completing 30 challenges spread throughout three unique arenas. Are you able to save poor Willy from his horrible fate of being a defenseless circus gladiator for the amusement of a bloodthirsty crowd?

In the endless Arcade mode you are able to unlock a variety of power-ups that help you compete against your friends and the rest of the world on the leaderboards.

Penarium offers local couch co-op multiplayer for two players in both co-op and versus modes where fellow contestant Rajiv joins Willy in the sadistic circus extravaganza. Compete against each other or work together for the high score! 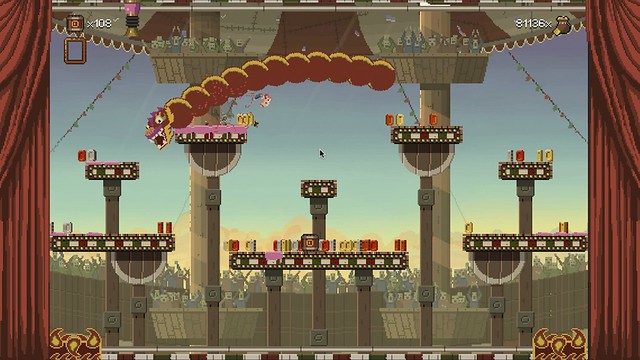 We coated all of this in a thick layer of absurd, dark comedy and lots of (pixelated) blood. What good is a circus show when nobody dies horrifically on stage?

We’ve presented the game at a number of events this year and the most heard player response to dying over and over is always, “just one more go!”

Penarium will be available for download on PS4 on 22nd September for just £6.99/€8.99 and comes with a FREE trial version.