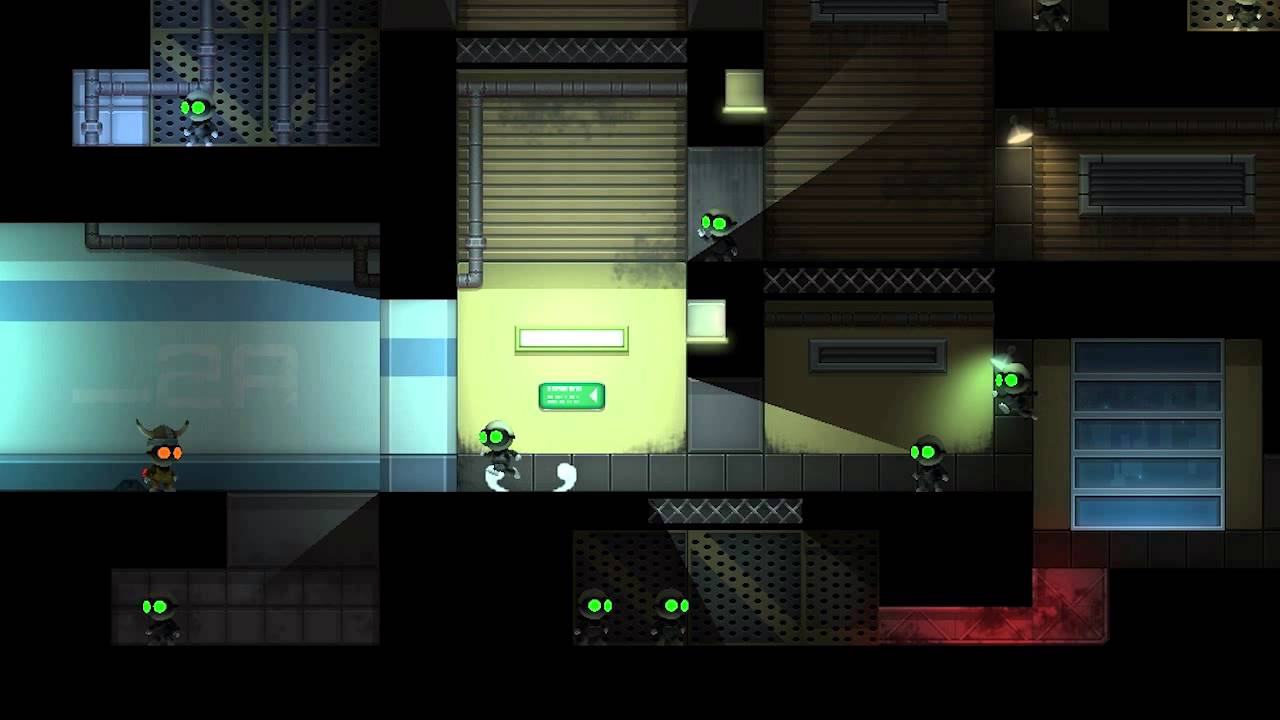 We’re also big fans of platforming, from classic puzzle platformers like Abe’s Odyssey, all the way up to the best of twitch-based action platformers like Super Meat Boy and exploration focused titles like Cave Story.

You’ll find a little bit of all of those games in Stealth Inc 2: A Game of Clones, our newest entry into the Stealth Inc series that started oh-so-very-long-ago as the lunchtime project of our designer Jonathan Biddle. Fusing disparate genres isn’t easy, but our first attempt seemed to go pretty well and feedback from press and players was almost universally positive.

In Stealth Inc 2, you play a clone trying to escape a sinister testing facility controlled during the night by a more than slightly obsessed Snr. Quality Assurance Manager, Malcom Alderman. In the previous game we put you through a series of ever more complicated test chambers, but in this game you’ve broken into the facility at large. Your mission is to rescue your fellow clones from their test chambers and ultimately escape the facility.

Stealth Inc 2 is the result of hours spent dissecting everything people loved (and loathed) about the original in order to bring you something that’s maintains all of the humour and instant gratification from the original game, but with more depth and variety, a fuller, more involved story and a better paced difficulty curve.  We’ve had a team working on a Stealth Inc game here at Curve towers every day for the last 4 years, so it’s truly something close to our hearts.

So what’s new? Well, for a start, Stealth Inc 2 is a bigger game, in scope as well as length. The original was a series of test chambers – they’re still present, but this time linked by a huge Metroidvania world full of challenges and surprises. The gadgets used by our beloved clone were a huge hit in the original game but existed outside the main parts of the game. In Stealth Inc 2, gadgets are front and center across 60 new test chambers and many of them have multiple uses. We’ve put a lot of effort into making sure our gadgets are all completely unique, and bring something to each set of levels you use them in. We’re certain you’ll have lots of fun with our outlandish toys.

Of course, if our levels aren’t enough – feel free to design and share your own with our inbuilt level editor. The fun – and pain (for our clone) – is literally endless. We’re excited to see what you come up with – maybe even pay our team back for being so cruel, huh?

Stealth Inc 2: A Game of Clones is a labour of love from our team here in London. It’s a game we’ve had a blast making – and one we can’t wait to see you playing. It’ll be available tomorrow, either on its own or as part of a bundle with the original game.  Buy the game on one PlayStation console and you’ll have access to it across any others you own. Cross Buy is a brilliant initiative that we continue to support wherever possible.

See you in the chambers!