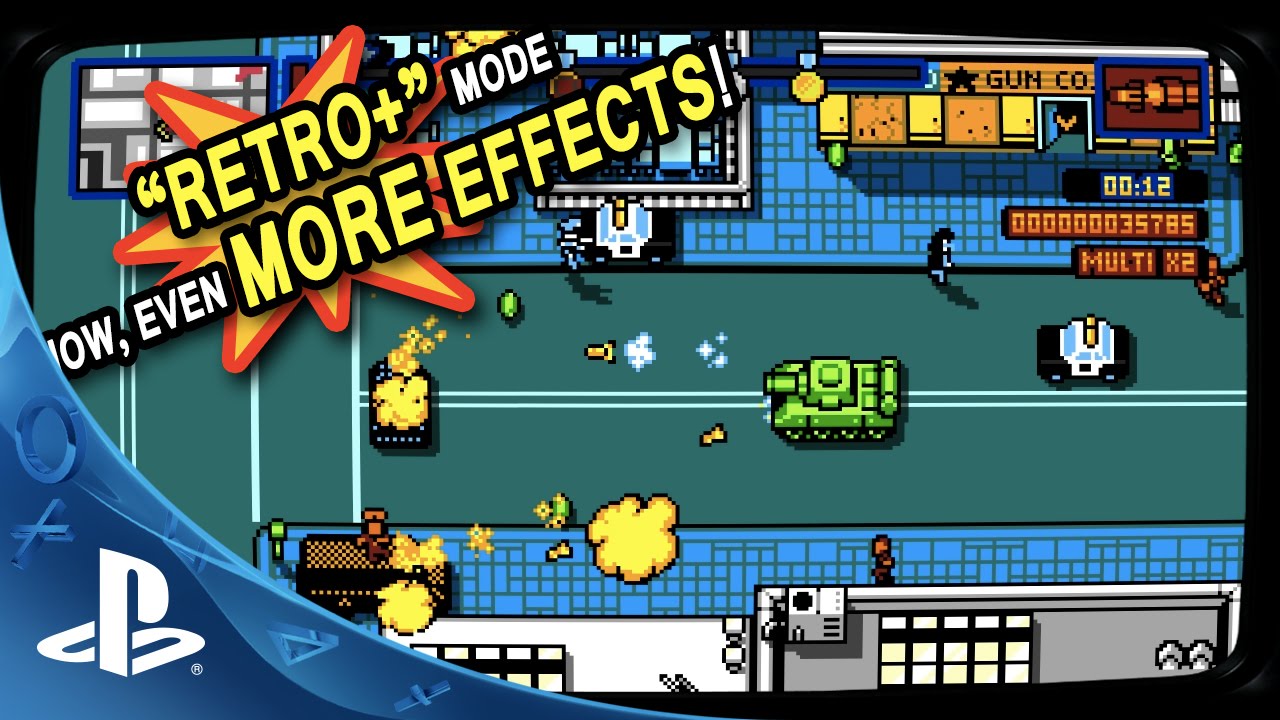 Retro City Rampage: DX, the top-to-bottom remaster of the original game will make its PS4 debut along with the brand new PS3 and PS Vita DX versions this 12th November, complete with cross buy and cross save for all three consoles.

You’ll get all three for €7.99, with an additional 20% off for PlayStation Plus members during launch week. That’s only around €3 for each platform, and much less than the original RCR’s launch price!

So what is ‘DX’ exactly?

Those who’ve been following RCR will know just how much the game’s changed since the original launch. Within weeks of the original RCR’s 2012 release, updates made vehicles faster, added more checkpoints, tutorials, hints screens, and tweaked missions. Those changes made great improvements, but still just scratched the surface. DX is a top-to-bottom remastering of just about everything.

For DX, every single mission’s been re-tuned. Vehicles. Weapons. Challenges. Visual Effects. Visual Enhancements. Checkpoints. Difficulty. Challenges. From the game’s core to sprinkles on top such as parking garages and waypoints, it’s more than just a new coat of paint.

The care I put into the game was reciprocated when DX was released on 3DS earlier this year. I felt more love from players and reviewers than ever before, earning almost unanimous 9/10s across the board and sales to match. After the chaos and stress surrounding the original 2012 launch, things finally came together according to plan and the reception I yearned for followed.

Retooling the game for the smaller screen also really taught me a lot about its play experience. I saw how a closer, more dynamic camera, brewed out of hardware limitations, actually made things feel more exciting. Selecting weapons from a grid instead of cycling through them made combat more fluid. The changes added up, and it was clear they’d be at home on HD systems too. Not just for the TV, but for the PS Vita as well – boasting not just a new zoom mode and touch functionality, but a completely new UI specifically for the handheld.

So, after the many months of working on this is secret, I’m incredibly excited be able to not only announce it, but announce it with a solid release date! No more “coming soon” this time! It’s a wrap! 12th November, 2014!

Retro City Rampage: DX includes both RCR:DX and the original RCR for the purists. Big overhauls were made to re-balance the missions, difficulty, weapons and even police AI, but if you want to stick with the original version, you can flip the switch under the Help & Options menu.

New zoom modes, a dynamic camera and a new lightweight HUD bring you closer to the action. Up close, the action packs more punch and driving feels much faster. The new 3X zoom option’s tailored specifically for the PS Vita, but also available on PS3 and PS4. Car engines were beefed up in RCR updates after the very first release two years ago, but the new dynamic camera doubles the *ooOOMPH!*. You’ll feel the difference when you compare 1X to 3X zoom and economy cars start to feel sportier. Once again though, purists can still play with the original zoom mode and original status bar style HUD.

The two graphics modes give you the option to amp the graphics up or trim them back. The updated “RETRO+” graphics mode delivers more eye candy with better shadows and more effects. The new “8-BIT” mode on the other hand, makes the game look even closer to something dug up from the ’80s.

More video filter options are also included, from colour modes to a widescreen tube border. You can now also eliminate the border completely but still use the scanline or dot-matrix filters.

Every single mission has been touched up, offering a better experience overall. Certain missions have been edited to improve pacing. In Death Cam VHS, for example, you won’t need to clear so many enemies during the melee section. During the car dodge tutorial, you won’t need to jump so much. It’s little changes like this which just make for a smoother ride. They’ve also been hand tuned to work with the new 3X zoom mode, making the new PS Vita experience the best it can be.

Controls have been tweaked. You can now jump immediately after firing weapons, making dodging enemies even easier. Weapons have been rebalanced, some boasting more damage, many with more satisfying effects. The cars and explosions blast more effects too – but purists can still stick to the classic “8-BIT” for more authentic ’80s experience.

A new weapon select screen can be toggled, pausing the game mid-action and enabling you to more easily switch weapons when your inventory’s full. It also supports touch on the PS Vita.

The PS4 version also has optional vibration support in case you want to feel the pixels thud under your pixel tires.

The weapon updates noticeably improve the Arcade Challenges, but many challenges have been reworked themselves as well. Second-Rate Sprees, for example, now run 30 seconds instead of 60, tightening rounds up to dethrone your friends from the leaderboards.

Two completely separate sets of leaderboards are now included, so ‘RCR:DX’ players won’t be facing off directly against players of the original ‘RCR’ mode.

With the freedom to rework things from top to bottom, ‘DX’ was able to boast a brand new trophy set too, which is now easier to 100%.

The city now has more to do, populated with weapon trucks. Getting the right tool for the job’s now a lot more convenient. You can purchase your weapons or try your luck and attempt to hijack them. Spelunky shop keeper style, so to speak.

The wanted level system and police AI have been deepened to create more of a cat and mouse metagame. Instead of running, if you stop to fight, clearing the screen of cops will help get them off your tail. Defeating three or more cops will spawn a Cop Coin which lowers your wanted level. You can still also spray your vehicle, find coins, or change your look with a new haircut, but this makes it much more fun and convenient. It’s balanced out with slightly more challenging police. If want to make things even more challenging, you can disable the coin drops from the pause menu.

The new HUD brings a larger minimap with it, which now displays more than just missions and challenges, also weapon, spray and power-up shops, as well as enemies. You can also set it to display other locations, such as specific shops. The larger minimap makes navigating the city much easier as you’re able to see all of the roads and alleys ahead, choosing the optimal route to a destination.

You can zoom into the minimap with a single button press now, as well as set waypoints. The entire front end and UI have been redone for the PS Vita, including touch support.

‘DX’ brings massive parking garages to Theftropolis. You can park one of every vehicle equipped however you like (that’s 54 parking spots!), and access them from any other garage around the city like a vehicle teleporter!

For chiptune fanatics, ‘DX’ now includes a 147 track music jukebox, enabling you to queue up hours of the incredible music composed by Jake ‘virt’ Kaufman, Freaky DNA and Norrin Radd.

In case you missed it, it’s 3X Cross Buy! Yup! The PS4, PS3 and PS Vita versions of DX all sold together as one, with a 20% discount for PlayStation Plus members during the launch week.

Owners of the original Retro City Rampage for PS3 and PS Vita can transfer their save games to the new DX version via Cross-Save. The new DX version is a separate purchase, but keep in mind that with DX, you’re getting the PS4 version, a brand new Trophy set and new leaderboards. Owners of the original RCR who transfer their save game to DX will also earn a shiny elite star next to their score on the leaderboards.

Last call! The original Retro City Rampage will be delisted from the PS Store and replaced with Retro City Rampage: DX in order to avoid customer confusion. While DX includes a mode to play the original RCR, if for some reason you would prefer the pure original, grab it before it’s too late. If you already own the original RCR, you not be affected by this. You will still be able to re-download it indefinitely, at any time. The delisting will only prevent new purchases.

That’s not all though! More Retro City Rampage surprises are still to be announced in the coming month. A pretty big one, in fact! Follow @RetroCR on Twitter or Retro City Rampage on Facebook to keep up to date. Keep an eye on http://RetroCityRampage.com too.