Dust: An Elysian Tail is coming soon to PS4

There is no way this could possibly go wrong. 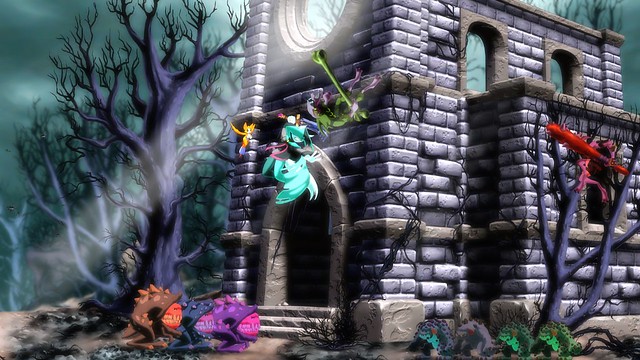 “Hello, internet-people! I’m Fidget, co-star of Dust: An Elysian Tail. As you can see in the photograph displayed above, taken moments ago in a candid fashion, I’m playing the game with a DualShock 4! That’s no Photoshop job, that’s the real deal! Dust: An Elysian Tail is coming to PlayStation 4 REALLY REALLY SOON! I KNOW! It’s crazy! Crazy like a nimbat!

“So, what is Dust: An Elysian Tail? I’m glad you asked, this being a press release about it and all!

“Imagine a 2D side-scrolling platformer, with crazy-fast swordplay and screen-clearing MAGIC supplied by yours truly. There are power-ups! Special abilities! Hidden passages! A whole world of STUFF to find! Main quests! Side quests! We’ve even got a quest where you can choose to put poison ivy into some jerk’s laundry! I KNOW! It’s magical! Let’s poison his laundry TOGETHER!

“Now, if you can, imagine all this awesomeness is hand-drawn like an old animated movie from the ’80s and ’90s, but with art at crazy high resomolutions! Like, 1080p! People tell me that’s pretty darn good! Also, 60fps. I’m guessing that’s some sort of speed? Like, the speed of awesome? I don’t know much about these things, though. I mean, look at my hands! I’m not plugging anything into expensive TVs with these ham-hocks.

Have a question about the game? Want to ask Fidget a question? Drop us a line in the comments section below! And you can follow our Facebook page for updates too!