Control the undead in The Hungry Horde on PS Vita 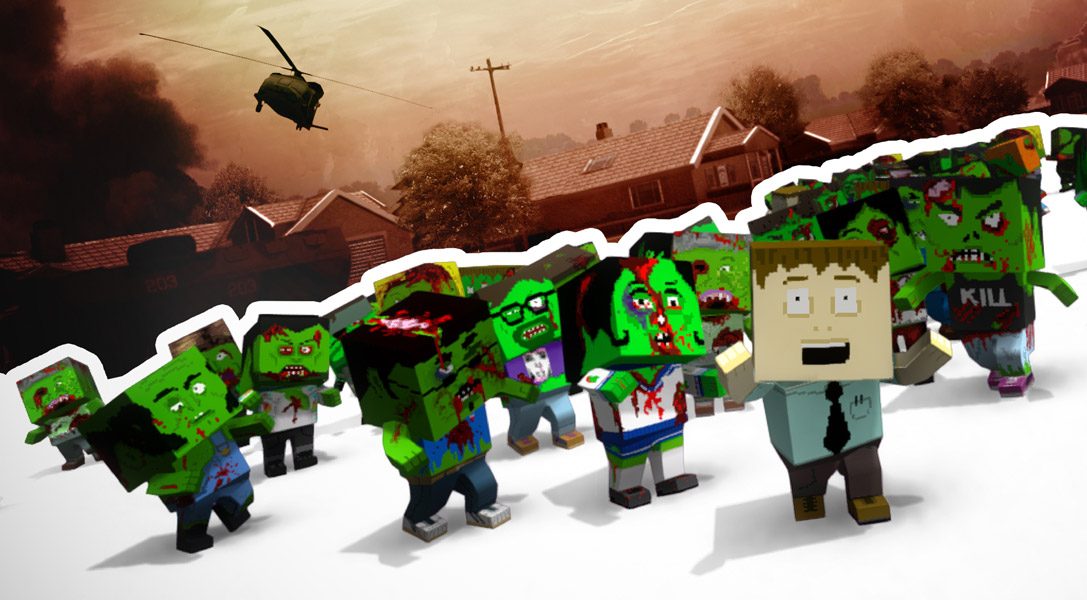 Wow. We’re featured on the PlayStation Blog! I’m Andreas Firnigl, Director at Nosebleed Interactive. We’re a small development studio based in Newcastle upon Tyne in the North East of England, and the reason we’re surprised we’re on here, is that we’ve come rather a long way in the last couple of years.

If we rewind to this time a couple of years ago, we were just a bunch of guys with a great idea for a game, not even an office. Being huge PlayStation fans ourselves, we decided to try our luck and pitched our idea to the guys at XDEV Studio Europe (part of Sony Computer Entertainment Worldwide Studios development group) – big shout out!

They’d just decided to launch their excellent PlayStation Mobile Pioneers program – a competition where the winners would get to develop a vertical slice; a kind of proof of concept demo that shows off all the key ideas in the game. We put together a pitch and were shortlisted.

I was on my own, very nervously pitching to a panel of six, but I knew the pitch was going well when one of the judges refused to pass the short demo we’d made to the next judge in line, saying “just one more go”. We won and as development progressed it became clear that we were constantly working to exceed expectations and pushing PlayStation Mobile to its limits. The game no longer felt like the bite-sized mobile game it started out as and we were keen to allow as many folks to play it as possible. The guys at Sony felt the same and that brings us up to now, where our small team are now busy developing the game for PS Vita. Yay!

Anyway, enough about us and onto why we’re here. We’d like to introduce you all to The Hungry Horde. Like all good ideas, it’s a pretty simple concept. You start the game off controlling a couple of wayward zombies. Every time you bite a human they join your ever increasing horde, until you’re controlling whole streets full of the undead.

Unfortunately, rampaging through the streets eating brains is always going to grab someone’s attention, and sensing the danger to the population the government have decided to do the only sensible thing they can. Quarantine the area and nuke you. So it’s a race against the clock to gather a big enough horde to smash down any human defenses and take on armed guards, tanks and any other opposition that gets between you and those tasty brains.

That’s the core of the game but of course there’s so much more to it than that. At Nosebleed we’re all total gamers. Arcade, puzzle, strategy, casual and hardcore. As long as they’re polished and fun we play them all. The Hungry Horde is packed with extra features and content to discover and unlock, like the zombie creator or the boombox mode, but the thing we’re really pleased with is the mini-games.

We use the term mini-games very loosely. They’re not really mini-games at all. Each one feels like a standalone game in its own right. We love games in games so we’ve taken this to the next level with The Hungry Horde, where we have a game where you play as a zombie, playing an arcade game where he’s playing a human, shooting zombies. How terribly meta!

Then of course there’s “Conga Zombies”, which is about… well… conga dancing zombies. You can probably tell we don’t take ourselves too seriously. There will be loads more in the finished game and we’re really looking forward to revealing them and some of the other cool features in the coming months.

From all of us at Nosebleed Interactive, thank you for reading! We hope you’ve enjoyed this small taste of what we’ve been working on, and we can’t wait for you all to start playing the game later this year.