Hands-on with the Destiny beta on PS4

Find out what to expect from Bungie’s trial run, which kicks off today

Today, PS4 and PS3 owners will get a chance to experience Bungie’s galaxy-spanning epic Destiny for the first time. Assuming the role of a newly revived Human, Awoken, or Exo, players will explore the ruins of a Russian Cosmodrome and battle hordes of formidable Fallen and feral Hive, all while earning new skills and collecting increasingly effective weapons and armour.

I had an early opportunity to play the Beta, and I’ve collected my initial notes below. While this post is by no means comprehensive, I hope it’ll help get you up to speed before you hop in yourself. And if you’re in the Beta, please share your tips, observations, and feedback in the comments below.

If you played or read about Destiny’s alpha last month, you might be wondering what’s changed for the beta. The answer: plenty! Perhaps most notably, the beta fills in many narrative gaps with pre-rendered and in-engine cinematics, fleshing out more of the backstory and making this feel much more like a world I want to explore. These scenes are fully voice-acted; your character even chimes in with his or her own voice from time to time!

Your Ghost companion’s dialogue has been refined as well, and generally fits better into the overall story, complete with computerised filters and other cool audio effects that lend a bit more personality and colour.

A few more enhancements I noticed in the beta: 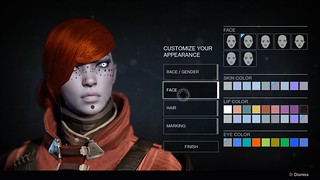 For those with a more competitive nature, the Crucible — Destiny’s PvP multiplayer mode — awaits. This pits players against one another in glorious combat, and keeps things extra-interesting by tossing vehicles into the mix on larger maps (such as the moon-based level I played here). Players can commandeer large, armed conveyances or deploy their handy Sparrow whenever needed — or they can stick to an on-foot approach to ensure an instant offensive is always an option. The mode I played saw my team capturing and holding three control points, while taking special care to eliminate those who would take over our post.

These are but a few observations I made in my short time with the beta ahead of its official launch today. Once you’re in, let’s compare notes in the comments! Destiny launches on PS4 and PS3 on 9th September this year, but you can play the beta now by pre-ordering the game, either at retail or on PlayStation Store. See you in the Tower.