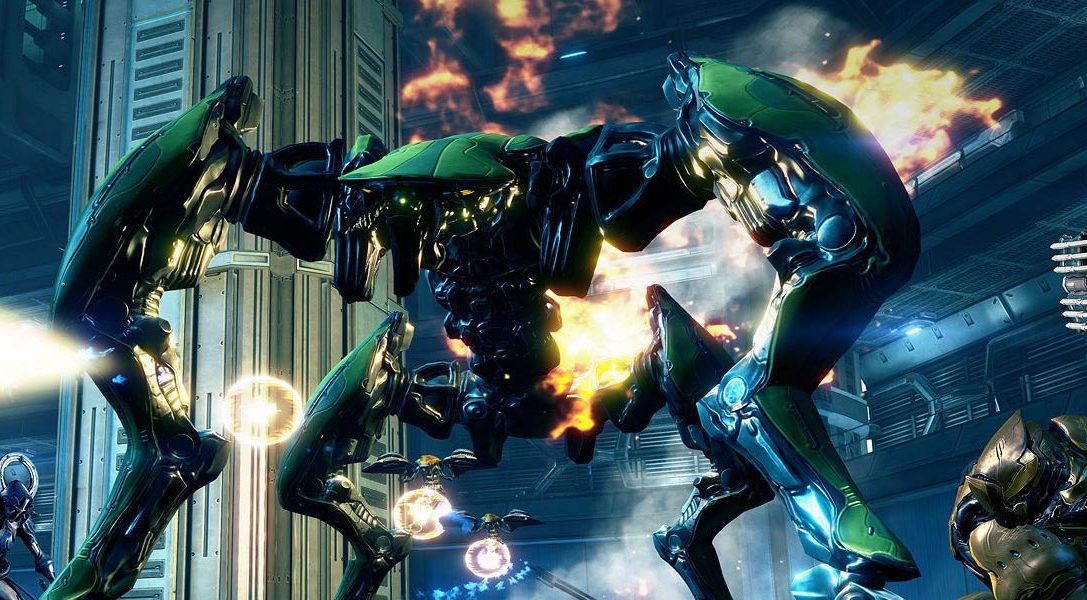 While the Digital Extremes team works towards deploying Update 13 on PS4, we’re making a quick pit stop to celebrate how far Warframe has come in its first year with a special anniversary edition of Tenno Reinforcements. Although your Tenno brethren on PC had a head start earlier in the year, PS4 Tenno hit the ground running right at launch. Incredible.

In celebration of Warframe’s first year, and to thank all who have helped build Warframe into what it is today, The Lotus is gifting each Tenno with a First Anniversary Edition of the DEX FURIS. Featuring an accurate high fire rate and low recoil, this Lotus-themed weapon also includes an additional weapon slot and is super-charged with a catalyst.
To claim this gift, PS4 players simply log in to Warframe before 7:00 PM BST on 21st April and open the inbox message, and the weapon will automatically be added to your Arsenal.

Also, marking this special occasion, the Excalibur Proto-Armour Skin has been unearthed. Available for a limited time only, this ancient skin is a reflection of Tenno past. Discovering the precise nature of this recently uncovered armoured prototype has proved elusive. Initial attempts at dating the relic point to ancient origins, perhaps even pre-dating the Orokin Empire.
Visit the in-game Market to purchase and add this limited time skin to your Arsenal today. Available now through 7:00 PM BST on 21st April.

We’re just a few weeks away from Update 13 deploying on PS4, which is quite possibly our largest update to date. There’s a new Water-based Warframe called Hydroid, new Weapons, new Sentinels, a crazy new boss battle, the unveiling of the Dark Sectors solar rail system, and so much more. I’m getting excited just typing this out — Update 13 is epic!
This massive update will not disappoint you, my friends, as it’s not only full of tons of new content, but also some surprises specifically tailored to the PS4 community. I dare not spill the beans just yet as we’re adding in some final touches, but I’ll have more information for you in the coming weeks.
Enjoy your FREE gift Tenno, we appreciate your support and love on the PS4. Until next time!