Guacamelee Bundle Fantástico out next week 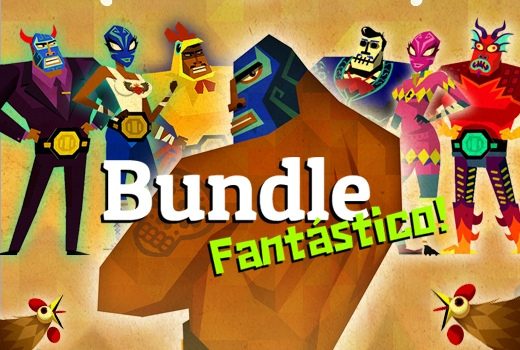 If you think he’s scary now, wait until he wakes up

Wait… what’s Guacamelee?
A modern Metroid-vania style action-platformer-brawler set in a magical Mexican-inspired world. Featuring beautiful graphics, non-stop fighting action, multi-dimensional platforming and two player co-op. Some people say that it’s one of the top digital releases in 2013. I’m incredibly jealous that you’ll get to play it for the first time.

But I already own Guacamelee!
Thank you so much! While this bundle isn’t meant for you, know that we love you.

Hell is a bureaucratic nightmare, obvious if you think about it

What is El Diablo’s Domain?
17 trials set inside the office tower of the devil. Each trial has a different goal – race against the clock, perform a huge combo, fight without dodging, etc. Player’s will need to think differently and develop new strategies to overcome each unique challenge. The flexible and the successful are rewarded with medals leading to new costumes and finally… respect.

Now THAT’s how you cut a rug

While you browse, Juan enjoys nachos with… guacamole.

Themes and Avatars
The smoothly animated dynamic theme, and other gorgeous static themes add some spice to your lonely XMB. The avatars ensure your online profile will never look better, or ever get dull.
To recap, for €5 more you get the El Diablo’s Domain, Costume Pack, Official Game Soundtrack, all three themes and 10 favourite avatars. Even the harshest critics are impressed!