FEZ is coming soon to PS Vita, PS3 and PS4 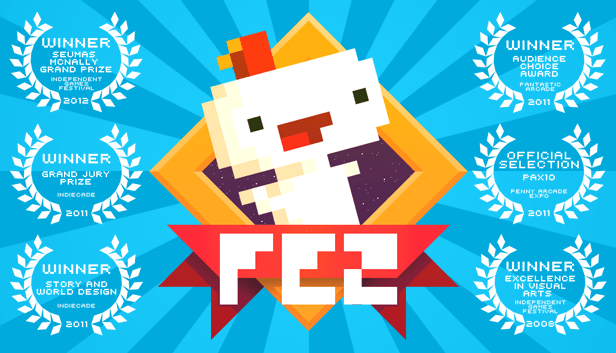 Hi there! My name is Marie-Christine Bourdua, producer at Polytron, and I’m here today to announce that FEZ is coming soon to PlayStation Vita, PS3 and PS4. Making FEZ happen has been such an incredible journey, and we are truly thrilled to see our game come to PlayStation platforms.

FEZ development started six and a half years ago with Phil Fish’s ideas and Renaud Bédard’s programming skills. The Montréal-based studio was back then (and still is) very small but very ambitious.

Only 100 days into development, we submitted a FEZ prototype to the 2008 Independent Games Festival, and were awarded the Visual Arts award, which was a huge public awareness and morale boost. But we still had a whole game to make!

We failed to meet a million deadlines and had to overcome financial obstacles, but met along the way amazing collaborators like the game’s composer, Rich Vreeland, aka Disasterpeace, and outstanding pixel artist Paul Robertson.

The game was taking shape, had a unique atmosphere and aura of mystery that we knew would find fans. As we were wrapping up development, James Swirsky and Lisanne Pajot (makers of the Sundance-nominated documentary Indie Game: The Movie) followed us through the joys and hardships of shipping a first game, and to another IGF ceremony four years later where we were awarded the Seamus McNally Grand Prize; and the game wasn’t even out yet!

Since the initial release in April 2012, we’ve been working on several versions of the game. We felt like FEZ deserved to be on every platform that can run it, and PS Vita and PS3 are a natural fit. FEZ lends itself perfectly to a “pick up and play” bite-sized mobile game experience on your way to work in the morning.

Development for these platforms is handled by Blit Software, a studio from Barcelona who is pretty much doing magic with the game. You may remember them as the guys who are making the Spelunky PS3 and PS Vita versions happen too, which we’re also much looking forward to! We’re working with them to provide a smooth and pixel-perfect version of FEZ, with every bit of content to explore that the game is known for.

For those who may not know, FEZ is a 2D platformer set in a 3D world. You play as Gomez, a charismatic and fluffy little white guy who wears a fez. When the existence of a mysterious 3rd dimension is revealed to him, Gomez is sent out on a journey that takes him to the very end of time and space.

There are no enemies in FEZ. No bosses, no combat; in fact, no conflict of any kind. It aims to create a non-threatening world rich with ambiance, a pleasant place to spend time in. And of course, with plenty of treasures to find and secrets to uncover!

Take a look for yourself, and we hope you’re looking forward to the game.

If you’re going to Gamescom in Cologne this week, come to the PlayStation booth in Hall 7 and try out a work-in-progress version of FEZ on PS Vita.

All the news from the PlayStation Gamescom 2013 Press Conference

PlayStation Plus on PS4: The revolution continues!

Music Unlimited gets amplified on PS4

Borderlands 2 is coming to PlayStation Vita

Shadow of the Beast is coming to PS4

N++ is coming to PlayStation 4

FEZ is coming soon to PS Vita, PS3 and PS4