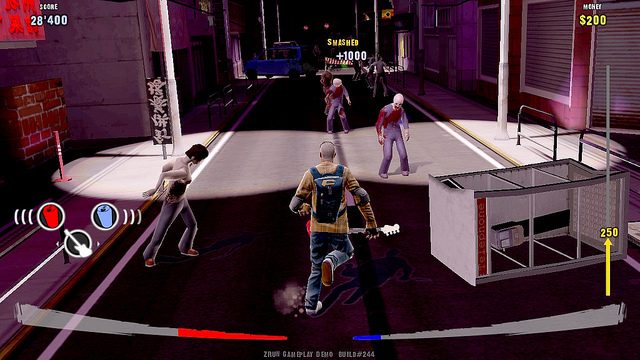 Hey, it’s Alexey from Beatshapers! I’m here to present our new game from E3 2013, ZRun – a third-person beat’ em up coming this summer to PS Vita.

The player assumes the role of a young, vacationing college student, who finds himself in the middle of an outbreak. He’s not a hero; he just wants to survive and escape this nightmare.

The player will attempt to complete runs between junctions. Junctions serve as checkpoints – when one is reached, it’s considered ʺunlocked,ʺ which will allow the player to access new missions. Players may start any mission from any unlocked checkpoint. Effectively, by unlocking new junctions the player will explore the city and move toward their final goal — escaping the outbreak.

Before starting a mission, the player can choose his equipment (items and weapons). Mission statistics (including friends mini-leaderboards) will be also available at junction checkpoints to give the game a competitive feel. Also, the dead “friends corpses” turned to zombies will be presented in levels as milestones where they died: the player’s name or PSN ID will be shown above it.

Progressing through missions yields points and money. After accumulating certain amount of points, the playerʹs level will increase. Leveling up gives the player upgrade points, which can be spent to upgrade stats and abilities. Money can be spent to get items, weapons and ammo. Items restores health and stamina, and cure poison and burning. Weapons are breakable blunt weapons (bats, pipes, planks), firearms (with limited ammo) and blades (knives, swords).

Obstacles are roughly divided into three groups: ones you can jump over, ones you need to slide under and ones you just need to avoid (full-height stuff like buses and trucks on the roads). Certain obstacles are hazardous, and will inflict burning, electrical or toxic damage. Hitting an obstacle inflicts some damage to character (HP loss) and may add poison/burning status.

The game is controllable via physical buttons, touchscreen and motion gestures, or a combination of both.
There are many comments comparing ZRun with modern endless runners, but let’s be clear: first, it’s not an endless (the player has a goal to reach) and second, it’s not a runner – it’s a beat ’em up at its core.

We are pleased to work with Vladimir “MoozE” Frey, an award winning composer (known for music for S.T.A.L.K.E.R.: Shadow of Chernobyl, Men of War: Vietnam, Firestarter) – he created an amazing main theme for the game. Check out his Facebook page.