Crafting the sound of DUST 514 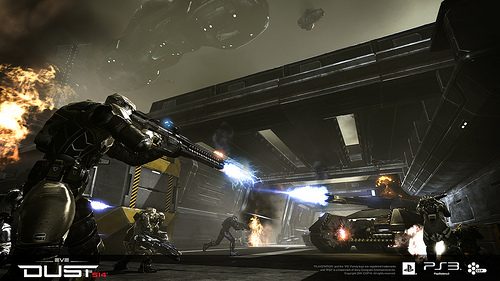 We’re Team Earworm. In a nutshell we own the audio from beginning to end on everything DUST 514-related. This involves everything from the musical themes that set the mood to the low-level optimisation of the audio engine.

Setting the scene
On the battlefield, sound is intel. And as every successful merc should know, intel is power. When your eyes are busy lining up a headshot or keeping your dropship on course under turret fire, you rely on your ears for the layout of the battlefield.

Sound gives 360 view of where the action is. Any extra sounds added just for flair distract you from what’s important: where the threats are.

For instance, the instinct for a music composer is to make the music more dramatic and lively when there’s a lot of action. However, we feel that the music should be less percussive in the middle of a firefight so you’re not getting conflicting information from the weapons and the music. But the music can also be used to signal changes in the game state, such as nearing the end of the match.

Beyond just making the world feel more alive, information is the most critical role the audio plays. Because of the modular nature of DUST 514 and the number of weapons on a battlefield at once, we have to be very careful about how we create and mix sounds.

Increasing the signal-to-noise ratio
So how do we allow for so many variations while still keeping the weapon types unique? And, how do we get each type to standout? With so many weapon types vying for attention, it could easily become a mess of noise.

Now wait a minute, what does that even mean?

When most people think of frequency in sound they think of notes – for example, a singer singing high or low. But across all the notes there is still something instantly recognisable about the singer. This is because of the unique shape of the frequency spectrum each note has. You can easily pick out two people singing together, even if they are singing the same note, because of their distinctive spectra. If two people have a similar voice (and thus similar spectrum shape) it sounds like only one person singing.

As it turns out, we can determine a lot of information from our ears, nearly instantly and without thinking. A big boat bobs in the water at a slow rate, causing waves to hit the handkerchiefs at a low frequency. A small boat jostles fast up and down, hitting the handkerchief at a high frequency. You can imagine telling the difference between these two boats is very easy if you can see the rate the handkerchief moves. That’s exactly what frequency spectrum is, and our ears are tuned to determine that.

Volume is not just an up or down thing, instead volume across each frequency matters more than overall volume. Our ears can distinguish the difference between a large number of rates and in DUST 514 our survival on the battlefield depends on it.

But that’s only half the story. A merc also needs to hear what’s immediate and what’s in the distance. We dynamically filter the sound spectrum of the weapon sounds, exposing just the distinctive frequency element of the weapon, as the sounds move into the distance. When sounds are close, they are rich and full, and their volume actually changes very little as they move into the distance. Instead we pinpoint the most unique part of the spectrum of each weapon’s spectrum.

Finally, to complete the feeling of distance, we also apply convolution reverb to sounds as they move far away. Basically, convolution reverb is the real-world recording of the sound of an environment. It saves and recreates all the reflections that evoke the characteristic frequencies and echo.

For DUST, we wanted a reverb that captured the expansive outdoor environments, so we used a recording of a single firework explosion in the middle of a large open area. This broadband sound allowed each sound in the distance to retain it’s important frequencies.

In future devblogs we will talk more about the weapons and vehicles of DUST 514, how we take into account their tech design and physics, not to mention our approach in keeping sounds futuristic and alien, yet still familiar and recognisable.

New RE Village demo comes to PS4 and PS5 April 17