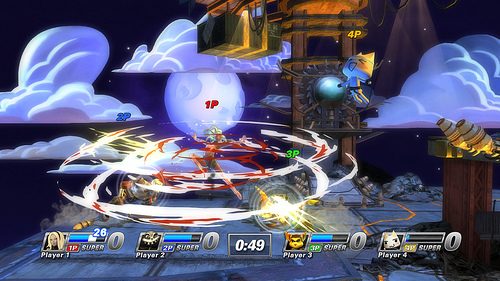 Hey everyone. We’re happy to follow up PlayStation All-Stars Battle Royale‘s win for “Best Fighting Game” at the DICE Awards (the awards where all of the voting is done by other games industry pros), with a gift to all the players that have supported the project from the start.

I hear from a lot of you guys, and I know you’ve been waiting patiently… but that wait ends tomorrow! We’ve got two new PlayStation All-Stars joining the Battle Royale: Kat from Gravity Rush, and Emmett Graves from Starhawk.

Any fighting fan will tell you how much it means to have new characters joining a game, but it’s even better because – as promised – these DLC characters are totally free for two weeks!

Wait, “free for two weeks” sounds funny… Does that mean if I download them, after two weeks is up I have to pay? Nope. You have a two week window to download the DLC. If you do, the characters are yours for free, forever and ever. You can play them online, offline, upside down, or however you want.

After the two week window ends, the characters will still be available in the PSN Store, but as paid DLC. Latecomers can still get Kat and Emmett, but if you download them in the next two weeks, they are yours free forever. The only way you would have to pay is if you missed this free offer, but you’re reading this now, so you won’t have to be that person.

Okay, so free is cool, but what are these characters are all about anyway?

Just like he did on out on the frontier on Dust, Emmett Graves depends on his tools to survive. Easily one of the most unique additions to the cast, Emmett brings Starhawk’s “Build & Battle” style to the fight, dropping down weapons and structures to help him out. He can drop shotguns, rocket launchers, new grenades, an AP-building Rift Extractor, or even an automated turret that tracks and blasts at opponents.

If he powers up for a level 3 super, Emmett pilots a deadly Hawk mech, blasting opponents with machine guns, planting aerial mines, or crushing opponents under the Hawk’s feet, all leading up to a super-ending flying strafe run that lays waste to the entire stage and sends everyone running desperately for cover.

Kat is great for combos and prefers close combat, with more inspired ways to zip around the arenas than anyone in the cast. In addition to the kicks you’ll remember from Gravity Rush, she also has some crazy gravity attacks, like creating a small black hole to draw in opponents, or a burst to push everyone away, and of course one of the deadliest level 3s in the game.

Kat teams up with her mysterious feline companion Dusty, uniting their powers to attack with frenzied claw slashes, a deadly lunge you can aim in different directions, and a massive black hole that kills anyone unlucky enough to touch its center.

Both characters come with everything that was included with the original launch characters, including a full arcade mode with intro, ending, and rival scenes, a second unlockable costume, an unlockable minion, custom backings and icons, taunts, intro/outros, theme music, and more.

In addition to the characters, there is also a new stage called “Fearless.” The fight begins atop a giant rock spire you’ll remember from Heavenly Sword, before crashing down into the second part of our mashup, where it literally collides with an electrified track from Wipeout. Keep your eyes peeled for cameo character appearances in Heavenly Sword’s scaffolding, as well as for the Wipeout racers that will send you flying on impact.

You can play this stage for free in ranked online matches, but to play it offline or in player matches, it’s €1.99.

Characters? Free, and yours forever! But only if you hurry and get them before the two-week window (that starts today) expires.