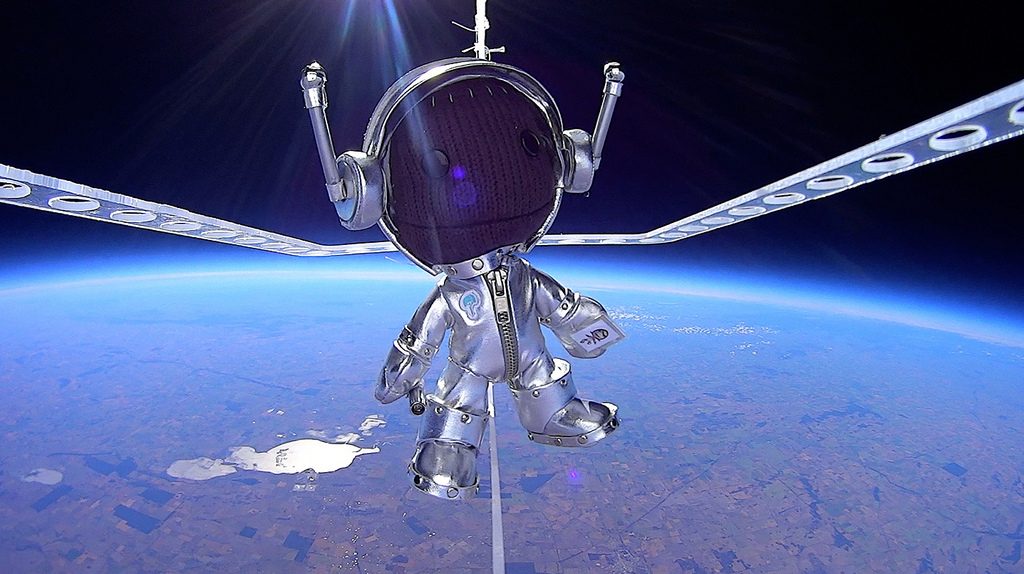 PlayStation Australia today announced mission complete as the courageous Sackboy returned safely from his trip to (near) space. Launched around 50 kilometres outside West Wyalong and sent high into the ‘sackosphere’, the hessian hero has brought back his own incredible bird’s eye view pictures of our own little big planet.

With perfect launch conditions, Sackboy’s meteorological balloon was filled with five cubic metres of helium, expanding to a 30 foot diameter and soaring to 95,000 feet before popping. The launch team made sure they could follow the journey by fitting the flight rigging with GPS and wireless modules, capable of tracking Sackboy up to 32 kilometres.

The journey was captured perfectly using four Sony Action Cams, stitched together on his flight rigging to create a 360 degree panoramic view.

The launch team eagerly tracked Sackboy’s progress, watching as he zoomed upwards at over 15 feet per second as a north-north westerly breeze pushed him up to speeds over 90 km/h. Racing through fields to Sackboy’s landing zone, they found him safe and sound in a wheat field over 69 kilometres away from the launch site.

As part of Project (Near) Space, over 1000 fans participated in the social media initiative and were able to use strategic clues and tips provided on PlayStation Australia’s Facebook page to locate, using skill and logic, where the brave Sackboy would land.

Sackboy couldn’t have made the journey without the help of his Facebook fans, who created their own design submissions for his maiden voyage spacesuit. The winning design from Tom Fox provided him protection from the elements and kept him in contact with Mission Control.

With two feet back on the ground, Sackboy is now preparing for his next customisable adventure with LittleBigPlanet Karting™ on PlayStation®3 (PS3™), that zooms in store next week, 8th November. This fast-paced karting fun will have both Sackboy and fans race the unexpected, this time on land: behind the wheel to race through fun-filled tracks, and battle in karting arenas.

You can see Sackboy’s full Project (Near) Space adventure in high definition with footage captured in flight in the youtube video below:-