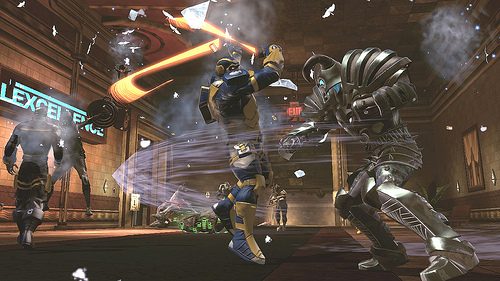 Welcome back from E3! I’m sure you all are pretty pumped for what’s to come this year in the video game world. A slew of new AAA titles, new features and new content from our favourite games and more! Speaking of our favorite games, as the executive producer of DC Universe Online, it is no surprise that what I’m most excited about coming out of E3 is DC Universe Online’s new DLC pack! That’s right, more new content for a game that is already free-to-play!

And the best part is…you don’t have to wait much longer to jump into battle!

Wednesday, we are launching DCUO’s highly-anticipated fourth DLC pack: The Last Laugh. We are extremely excited about this new pack as it is the first time we have created a major update almost entirely focused on player versus player (PvP) combat. The Last Laugh will include hours of multiplayer gameplay in the Safe Houses and Headquarters, an all-new weapon, and new Light-Powered and Kryptonian Legends PvP characters.

The story revolves around one of our favourite villains, The Joker, who has decided that the heroes and villains have been working too closely to defeat Brainiac, so it’s time to create some chaos. He has hacked the security systems of the Hero and Villain Safe Houses and Headquarters, thereby allowing for invasion scenarios. With The Last Laugh, we’re introducing Safe House PvP battles, which are four-on-four battles that take place in new maps created using the in-game Safe Houses. Also, there are three new game modes as part of the Safe House battles, each with its own unique strategies and objectives. We’re also introducing Headquarter Battles, which are massive eight-on-eight battles that take place in either the Justice League Watchtower, or the Hall of Doom. In all of these battles, iconic DC characters and other NPCs will join the fray to add another challenging layer to the chaotic battles. Lastly, we are giving players a new brawler-style weapon, The Shield, which can be unleashed to take down opponents!

So, as you can see, we created The Last Laugh purely for the players that like to take the fight to each other in DCUO’s amazing PvP combat. It’s going to be a lot of fun and add so much more to the gameplay experience. That said, I hope you take the opportunity to prove to the world whether heroes or villains will be triumphant.

See you in game!