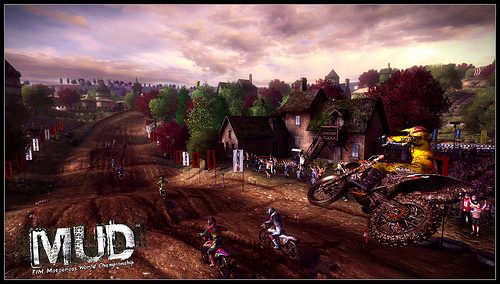 The demo packs up some of the best stuff you’ll find in the game: a Quick Race on the Glen Helen track (USA), choosing the world MX1 champion Tony Cairoli or Steven Frossard. This one is among the most demanding venues, with extreme slopes, very technical jumps and breathtaking sights.

To give you a glimpse of the Mud World Tour, we’ve also added a Checkpoint Race challenge on the same USA track, you’ll discover how different goals change the way to approach it.

MUD is a game that packs up some amazing features, never seen on PS3: it includes the official license for the Motocross World Championship, including the MX1 and MX2 classes, and 12 tracks around the world.

It also features the Monster Energy Motocross of Nations that gathers the best offroad riders from both sides of the Atlantic: Villopoto, Baggett, Dungey will battle for victory with the European champions like Cairoli and Roczen.

This should be enough to knock down any serious motocross fan, but we weren’t satisfied yet, so we included a MUD World Tour where you’ll take care of four “hero” riders, grow their skills, use rewards to buy new stuff ( helmets, bikes, events access and more) and open your way to the top.

It’s not going to be easy because it’s a long, long way to the top, and you’ll be competing in Standard races, but also in Elimination races, Head to Head races, Checkpoint races, and Monster Energy Trick Battles, to show to the world who’s the best.

Did I say tricks? Yes, the world tour integrates the Monster Energy Trick Battles, and here the dev team has seriously gone wild: how about pulling insane trick combos jumping on the deck of an airplane carrier ship? Maybe do you prefer the Grand Canyon, or a Czech Republic castle? In this mode you’ll be using real gear from top manufacturers like Fox, Thor, Airoh, Ufo, Just One, Progrip, Scott. Cool but risky stuff!

MUD is a fresh take on Motocross and Freestyle, including some new cool mechanics like the “scrub” or in-race energy drink use, developed with the help of many real riders, packing up tons of licensed gear, bikes, riders and game modes, a 12 players online. See you on the track!