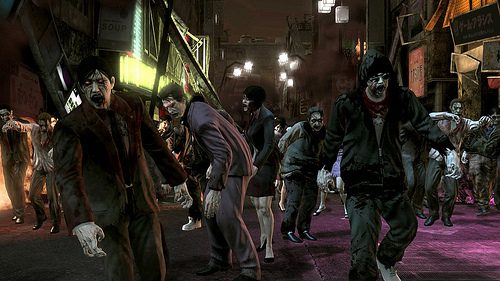 I’m really pleased to be able drop by the PlayStation Blog to confirm some great news for all Yakuza fans; the much requested “Yakuza of the End” is coming to our shores. Renamed Yakuza: Dead Souls the iconic Japanese series returns, only this time it brings something we’ve felt has been missing – zombies!

If you find yourself not believing that zombies and Yakuza can mix, then take a look for yourself.

We see them: the souls of the dead

The version we’re bringing to the west features the entire storyline, as well as brand new mini-game; Pachislot. Yakuza: Dead Souls returns you back to the streets of Kamurocho, which is now under attack by hordes of zombies. Though you’re not going to be restricted by zombies being your only threat, you’ll also face powerful mutants and of course members of the Japanese underworld.

The end of one chapter marks the beginning of another

Playing through the eyes of four of the most revered members of the series, you’ll be tested by changing allegiances and the lines of friends and foes being blurred. Whilst zombies are bad enough, combined with the threat of the Yakuza too, you’re in for some testing times.

For the first time ever, Yakuza now also features gunplay, with everything from pistols, rocket launchers and mini-guns available for destructive use against your enemies. The only complication being how dead are your enemies going to stay?

What was once whole is now destroyed

Well that’s your lot for the time being, a quick announce and tease, though I’ll be back at some point to give you some further scoop on the game.

Until then, stay safe, and we’ll keep those zombies on ice until release, after all they won’t stay fresh for long.