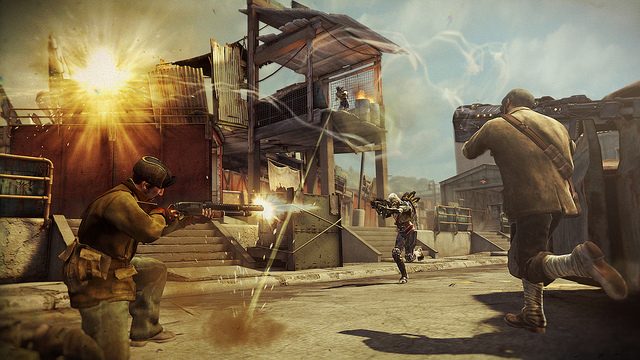 Gamescom has been amazing. However, something is still missing – an unyielding void in the soul of Resistance that needs to be filled. Something cold. Something unyielding. Something… Sledgehammery? Yes, that’s it! We need to show you the Sledgehammer, Resistance 3’s brutally blunt new melee weapon. Here – let me summon the video gods and see if they can whip something up for the latest R3 Dev Diary.

By George (or Rey), they’ve done it! Our all-new Resistance 3 Dev Diary features the first gameplay footage of Capeill’s intimate side – intimate as in he’s close enough to Grims to smash in their deformed faces with a giant Sledgehammer. It’s pretty wicked (except if you’re a Grim).

Plus, you will get a detailed look at the human guns at your disposal in the game. Just because they aren’t modified with some fancy alien technology doesn’t mean they won’t plow through the Chimera faster than Rainbow Dash can clear the skies of Ponyville. Go in-depth with the explosive nuances of the Magnum, the Carbine, and the Marksman, and a peek at their powerful upgrades for good measure. Because what’s better than shooting things? Shooting things – better!

Whether you’re stretching your trigger finger with the exotic weapons or getting your melee mash-fest on with the Sledgehammer, Resistance 3 offers you a feast of fiasco-enducing human weaponry. The good news is, you won’t have to wait long to get your hands on them either. The game comes out on September 9th, so be sure to pre-order now and garner exclusive bonus content. Also, for all the latest Resistance 3 information be sure to follow Insomniac‘s Twitter and Facebook.

So, my fellow Resistites – what weapon do you think you’ll be utilizing the most on your journey to New York? Sound off in the comments!