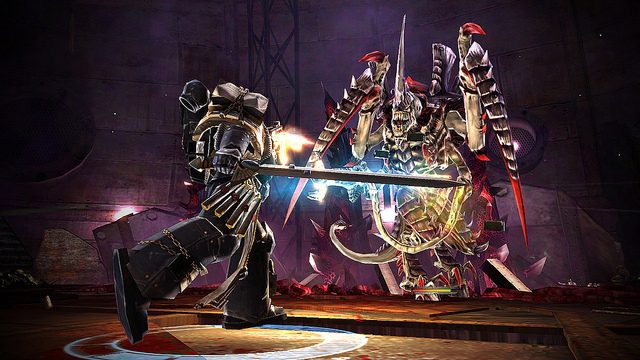 THQ Inc. today announced that arcade shooter, Warhammer 40,000: Kill Team will be available to purchase for Playstation Network on the 2nd August in North America and 10th August in Europe.

In this third person arcade style shooter, players take on the role of an elite Space Marine team sent to assault a giant Ork Kroozer en-route to an Imperial Forge World. Do you have what it takes to take out the Warboss and prevent the WAAAGH!?

Players who complete the first mission in Kill Team will unlock the deadly Power Sword weapon for use in multiplayer in the upcoming Warhammer 40,000 Space Marine. Sheathed in a power field, it cuts through armor and flesh alike and features unique animations, combos and damage output.

Kill Team allows players to choose from four unique classes, including ranged specialists the Sternguard Veteran and Techmarine, and more melee focused classes like the Vanguard Veteran and Librarian. With two-player same screen Co-operative play, multiple weapon upgrades and six iconic Space Marine chapters to select from, Kill Team is a must-play for fans of Warhammer 40,000.

More information can be found on the Kill Team tab on Space Marine’s Facebook page.

Kill Team is scheduled to launch for Playstation Network for a suggested price of £6.29/€7.99.

Space Marine is set to launch in early September worldwide. To take advantage of FREE in-game content go to SpaceMarine.com and pre-order today.