Shadows Of The Damned Comes To PS3 This Week 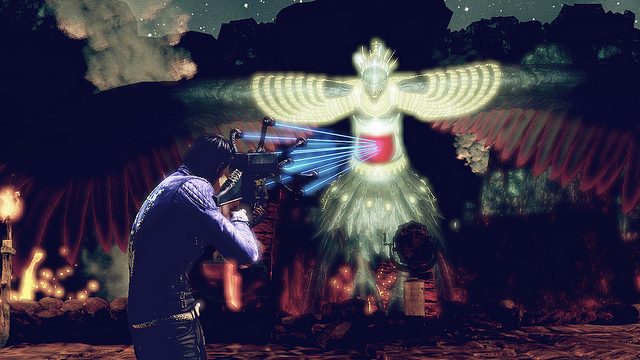 Yikes! That is one giant demon, and he’s carrying a big stick, err tree.

The concept of light and dark as a metaphor for good and evil is an old one, but the Light and Dark gameplay in Shadows of the Damned takes it to a whole new level. It is less literal, but rather metaphorical, in the pain and torment that is caused to our hero. As for gameplay, the player should not take the approach of “shoot anything that moves”. Each environment and enemy will require a thoughtful approach in order to progress.

Usually, darkness is lethal to the player, but sometimes may be required in order to expose an enemy’s weakness. Each situation is different and the player must build upon the earlier concepts encountered in order to defeat the tougher enemies deeper in the game. Shadows of the Damned is the thinking man’s shooter.

Here is the Big Boner in action. Easily dispatching a giant demon.

With regards to the story, our hero must find his girlfriend Paula, the love of his life, who has been taken from him by the lord of demons in retribution for killing his minions. Garcia Hotspur is a demon hunter by trade, but must now travel through hell in search of his beloved, the most important thing in his life.

One of the many bosses that Garcia encounters in his journey through hell.

In the traditional view of hell, sinners suffer punishment in body and soul for eternity, resulting in everlasting punishment for the damned. Conversely, Suda51’s metaphorically twisted vision is hell is a place where suffering is more mental than physical. It is a place where our hero must endure his trials of torment, and if successful, can one day leave if deemed worthy.

As the player progresses, major weapon upgrades become available. Here we have the “Teether”, an auto-rifle type weapon that shoots teeth (of course), upgraded to shoot missile like projectiles that lock onto its target. We fondly refer to this weapon as “The Dentist”.

Suda’s version of hell envisions the player passing through several tests to purge and refine our hero so that someday, when he finds his true love and defeats the lord of demons, he will be allowed to return from hell. If he fails, it will consume them permanently.

Even hell (Suda51’s version of hell) has pachinko parlors.

There are many interesting aspects in Shadows of the Damned, and we are really excited for the game to launch so our PlayStation fans can enjoy it as much as we did making it. Until then, enjoy some of these PlayStation.Blog exclusive screenshots from the game.