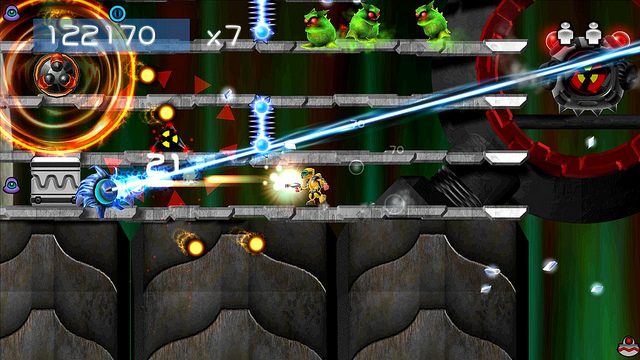 Tis a joyous time. Summer is here. The birds are singing. The Bees are buzzing. Flowers flowering. However… we don’t care about that nonsense. Oh no. What we say is: Draw your curtains. Turn on your PS3. Grab a pair of super friction thumb protectors… and a spare joypad… or four. Make sure you have 5 quid / 6 Euros in your store account come July 6th… and prepare yourself for one of the most ridiculously intense shoot-em-ups ever… or at least since PomPom made their last Playstation game.

But first, a dash of history. Last year PomPom made Alien Zombie Death on PSP minis. Heralded as “pacy, mean-spirited, and delightful.” By EDGE magazine. It was a simple, extremely focused platform shooter. We loved making it. Anybody with the required skill set loved playing it. Those who didn’t clearly play too much backgammon.

Now, on PS3, we have the official sequel to Alien Zombie Death! We’ve taken the original game, pulled out a big jar of MEGA, and gratuitously poured it all over. The result? Alien Zombie Mega Death!

… and finally, It’s made by proper, salt of the earth, independent game developers. In other words,
just two dudes sitting in dark caves somewhere in the UK. All by ourselves. No help from no one… apart from a sound engineer we keep locked in the shed.

Buy it! Its cheap! It’s mad! It’ll make your fingers fall off.