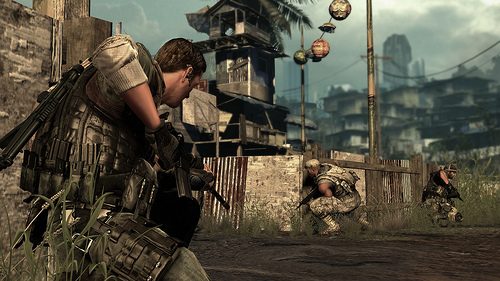 I’m pleased to announce that SOCOM: Special Forces launches this week in Europe!

So I’m sure you’ve seen quite a few posts over the last few months from the guys at Zipper but, just in case you’ve missed anything, here’s a quick recap on what to expect.

In the solo campaign, players will guide the Operations Commander and his squad across 14 missions set in war-torn Southeast Asia and a country on the verge of civil war. Fans can also expect exciting competitive 32 multiplayer battles with all-new maps, original gametypes and numerous modes of play. In addition you can hook up online with a great five player co-op mode…

If that wasn’t enough the game is also compatible with the PS Move controller, Sharpshooter and in gorgeous stereoscopic 3D (for those lucky enough to have a 3D TV)

I can confirm that SOCOM PRO Access for PAL regions will be available to download for PlayStation Plus subscribers at no extra cost from tomorrows store update for one week (20th April) Following that it will be available to everyone from the 27th April, free of charge.

So what can you expect? To begin with you’ll get PRO custom game types that were tested in the SOCOM: Special Forces beta period.

Following that SOCOM PRO players will get a set of weapons to wage warfare with.The M-16 (for Spec-Ops) and the AK-47 (for the Insurgents) assault rifles! Expect to see those within the first 30 days of SOCOM Special Forces release. Additional benefits will include access to exclusive multiplayer maps, various co-op additions, dedicated leaderboards, and lots more.

Hope you enjoy the game and any feedback for the guys then please let me know.