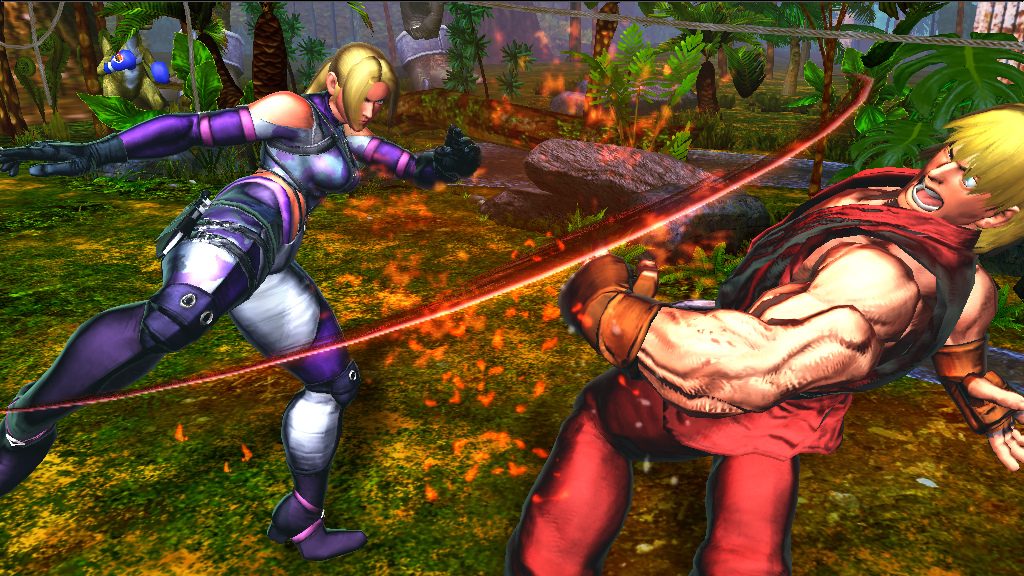 “When we [CAPCOM] took that 10 year break between releasing Street Fighter games, I feel that Tekken diligently stoked the fighting game campfire and kept people interested,” explains Yoshinori Ono, producer on Street Fighter X Tekken and one of the most animated game developers I’ve ever met. “With Street Fighter IV we tossed kerosene on that fire and got fans really excited about fighting games again.”

“I was having dinner with the Tekken director [Katsuhiro] Harada-san shortly after Street Fighter IV came out and we got talking about how we could keep that campfire burning,” he continues. “We were half-joking when we first conceived this collaboration, but it did seem like a great idea to both of us and pretty soon we were both saying, ‘you go back to your office and I’ll go back to mine… let’s synchronise watches and convince everyone that we should do this’. Long story short, we’ve got our game coming; they have a similar thing going on over there, and we’ll see what happens.”

Ono-san was speaking at CAPCOM’s Captivate event in Miami, where he unveiled the first batch of playable characters in Street Fighter X Tekken: Ryu, Ken, Chun-Li, Guile and Abel; and Kazuya, Nina Williams, King, Marduk and Bob from the Street Fighter and Tekken worlds respectively. I have played quite a bit of the game using all characters over the past week. If you’re interested in hearing about that then ask away in the comments, but for now I’ll leave Ono-san to continue the story of how Street Fighter met Tekken…

“Harada-san has zero input on this game and we don’t do an awful lot of communicating. In fact, he has less knowledge of the game than you do right now and he might learn something when he reads this interview.”

“Street Fighter and Tekken have always been different games. Street Fighter is slower paced and a little more deliberate, it’s all about judging the distance between yourself and an opponent and anticipating what they are going to do. It’s not as aggressive as Tekken, which is played at a faster pace, right from the very first punch.”

“What we’ve tried to do here is merge the two so that you retain some of the more thoughtful approach that you associate with Street Fighter, while also getting a taste of that more ‘in your face’ Tekken style. We think we’ve found a way to get the best of both and we’ll just continue fine-tuning so that the final result is a perfect marriage and a unique game in its own right.”

“There was some communication early on and, usually with a collaborative project like this, we would be obliged to buy some Tekken reference materials, but I certainly don’t want to give money to a competitor, so I’ll most likely work out some private deal with Harada-san where we borrow that stuff. I’m not going to tell him exactly why we need it though, that would be showing too much of my hand.”

“But back to the original point, they have no input into our game and we have none into theirs.”

“There are a lot of Tekken characters that are really difficult to get right in this game, but our selection criteria is to pick the most challenging to bring over because it’s more fun for us and I think it will make the game more compelling in the end. One example is Marduk, who is a pretty surprising inclusion. We have some other powerful grapplers in Street Fighter but nobody that moves the way he does. From E3 onwards we’re going to be revealing many more characters and some of them are going to be truly out of left-field.”

“You might be thinking there’s no way we can include certain characters but you could be second-guessing yourself further down the line. The Tekken universe has some supremely weird characters, including animals and even inanimate objects, and that might strike you as contrary to the Street Fighter aesthetic, but then we’ve had a character whose limbs can stretch and people shooting fireballs from their hands, so the addition of an animal wouldn’t be so out of place and it could make the game really interesting.”

“The ideal ending to this story is to have built a common ground, where the best Street Fighter players and the best Tekken players in the world can duke it out. I’d be really happy with that.”