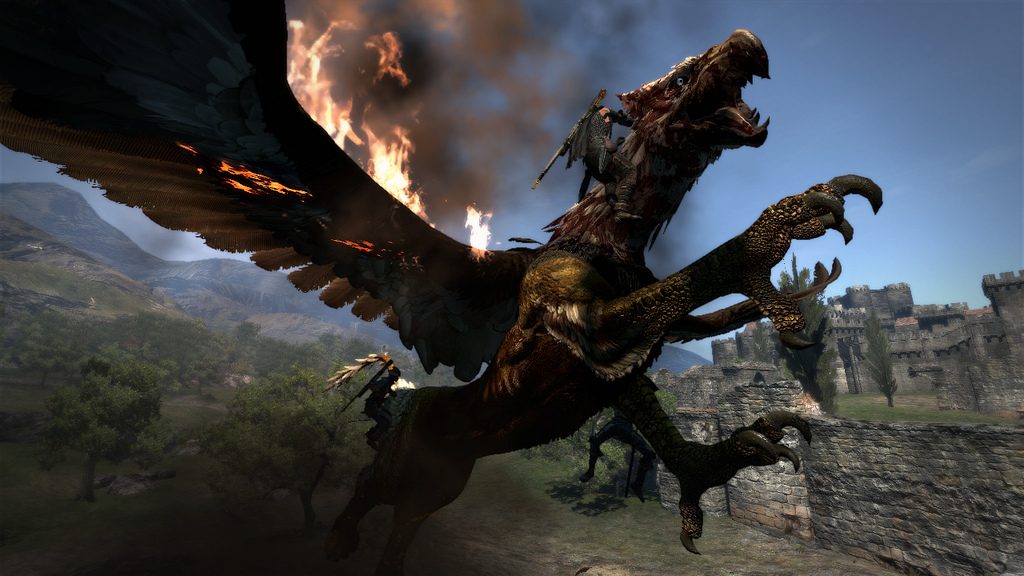 Dragon’s Dogma is a new intellectual property from the creators of Devil May Cry 4 and Resident Evil 4. And while it resembles another Capcom series featuring monsters and the hunting thereof, we’re promised a unique experience when the game launches in “early 2012”

I played a short demo and met with the game’s director, Hideaki Itsuno, and it’s producer, Hiroyuki Kabayashi, at CAPCOM’s Captivate event in Miami last week.

“While they may have some superficial similarities, they are very different games at heart,” explains Hideaki when asked about comparisons to Monster Hunter. “One key difference is that Dragon’s Dogma has an overarching story whereas in Monster Hunter the focus is on the hunt.”

In a nutshell, Dragon’s Dogma is an open-world action adventure set in a world of swords, sorcery and enormous, deadly monsters. “When I was at junior high school I was really taken in by The Lord of the Rings, so I’m sure that has had a strong influence,” explains Hideaki. “You can expect to see a lot of those creatures from Greek and Norse mythologies that fantasy fans will be familiar with.”

“While we don’t share a common history and mythology, Japan has had access to the same pop culture experiences over the last 30 years, and I think that Japanese people do like fantasy games, movies and books. Because of that, we have the same working knowledge of myths and creatures such as the Hydra and the Griffin and people in Europe and America do.”

Dragon’s Dogma has been in development for three years and currently has more people working on it than any other Capcom game. “This is a game that I have wanted to make for many years,” Hideaki adds. “I’ve never felt that we had the technology in place to take on a project of this scale. Now, we have consoles powerful enough and a development team at Capcom knowledgeable enough to bring this vision to life.”

The demo playable in Miami was a quest to take down a Griffin using the Strider – one of three character classes alongside Mage and Fighter – and the flexibility of the combat was the aspect that most stuck in my mind. You’ve got your standard sword melee attacks and daggers for very close combat. You can grab on to the griffin’s wing and hack away as you both fly across the verdant fields or have your mage enhance your weapons with fire and take it down with a volley of flaming arrows.

I went back four times overall to experiment with different solutions to the same boss fight, which is impressive pulling power considering I also had Street Fighter X Tekken and Resident Evil: Operation Raccoon City at my disposal (more on those later in the week).

Your three accomplices in monster-bashing are a key part of the gameplay and are known as Pawns. You can issue commands to them using the directional buttons and they respond with tips along the lines of “Orcs hate fire” and “deploy the rolled-up newspaper” (I made the second one up), and they can develop abilities of your choosing. Interestingly, there are more than 200 individual NPCs in the game world, each with spoken dialog and a full 24-hour daily routine, and any of them can be recruited as Pawns and then customised to your needs.

We are told that there will be “a brand-new approach to multiplayer” but were unable to squeeze out any further details. The answer to that other ubiquitous interview question is that the main quest is expected to deliver around 30 hours of gameplay, not counting side quests.

As you can see from these screens and trailer, Dragon’s Dogma is a looker and we’ll be keeping an eye on it here at PlayStation.Blog. Feel free to ask questions and look out for more Capcom posts later in the week based on my time with Street Fighter X Tekken, Resident Evil: Operation Raccoon City, Dead Rising 2: Off the Record and more.