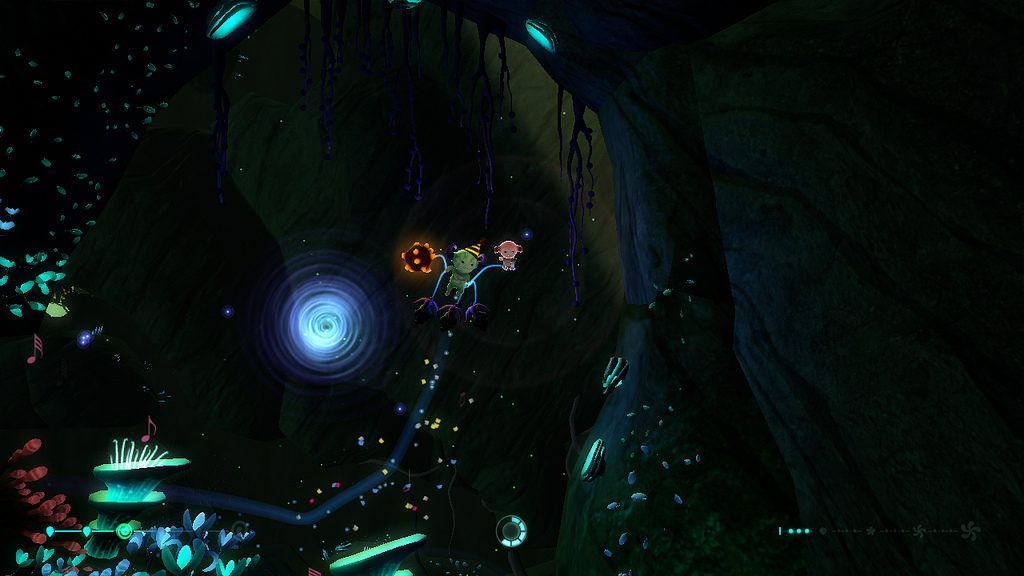 One of the questions that people often ask is: where does the idea for a game come from? For The UnderGarden it was a bit of a journey, so it’s hard to pinpoint exactly when the whole idea came together, but there are really several different influences from other games, art and music that played a role.

The UnderGarden started its life as a simple physics-based platform puzzle game. Using the term “game” perhaps was a bit of a stretch: it was really just a bit of a physics playground. Back in those early first prototypes, there was no real goal or purpose, and the game was really just about knocking things around and seeing what happened. As is sometimes the case, the fun comes out in ways you never really planned on, and that’s what started to occur in the early days of The UnderGarden.

The more the team played those early demos, the more we realised how satisfying it was just to move things around and hear them make different sounds as they collapsed or bounced off each other. As we added more colourful graphics and sounds, one thing we noticed right away is that people would often get “zoned” while playing. They kind of got absorbed in watching the little things sparkle and make sounds as they flew through them, and after a few minutes just got lost in the whole experience. When someone described it as “popping bubble wrap”, we knew we were onto something.

Adding the plants and flowers that you grow was something we had experimented with in the past (there are screenshots of something called “Eden” on our site). We’re not sure whether the flowers came before or after the environments, but definitely adding colour to an otherwise dark world as you play, and having them all make different musical tones, seems like a pretty natural effect that definitely enhanced the overall experience. People really liked the way the world seemed to come alive the more you played.

The UnderGarden was designed around the idea that a game does not have to be overly difficult or tense, but can also be a relaxing experience. We’re fans of all kinds of games, but certainly some of the exclusive PSN titles like Flower, Flow and some of the PixelJunk games played a role. There is a nice simplicity to these titles, and playing a game to relax can be a much different and very fulfilling experience in itself. Of course, we all love our shooters too, but sometimes you just don’t want the tension. Sometimes you just need to unwind.

Co-op play is also worth mentioning again. The inspiration for this was simple: how many times do you wish you could play a game with a friend, family or significant other, but they aren’t at the same skill level as you? A lot of co-op games assume both players have the same skill set, but we’ve found this often is not the case. Nothing beats sitting with someone in the same room and being able to enjoy a game together, so we purposely made the co-op play the kind of thing that a second player could have fun with even if they don’t usually play games.

For the environments, there are some obvious influences from nature in coral reefs and exotic plants, for example, but there also some artistic influences that have come into play. Once you have grown a lot of flowers, levels tend to take on a bit of a 1960’s counterculture feel to them. It is definitely not as trippy as some of the works of the period, but the whole idea of growing plants, adding vibrant colours, generating different sounds and becoming more and more relaxed as you play certainly lends itself to some obvious comparisons with that era. These are, of course, mostly coincidental. And then there’s the character itself… he’s a little harder to explain!

As for the music, our music director has created different tracks that not only work on their own, but can be layered together with each other as you go near the different musicians in the levels. His thoughts and inspirations for the music will follow in another article.

Overall, while we’ve drawn inspiration from a number of sources, we’ve also tried to create something unique that stands on its own. We hope you will enjoy the experience we have tried to deliver on PSN.