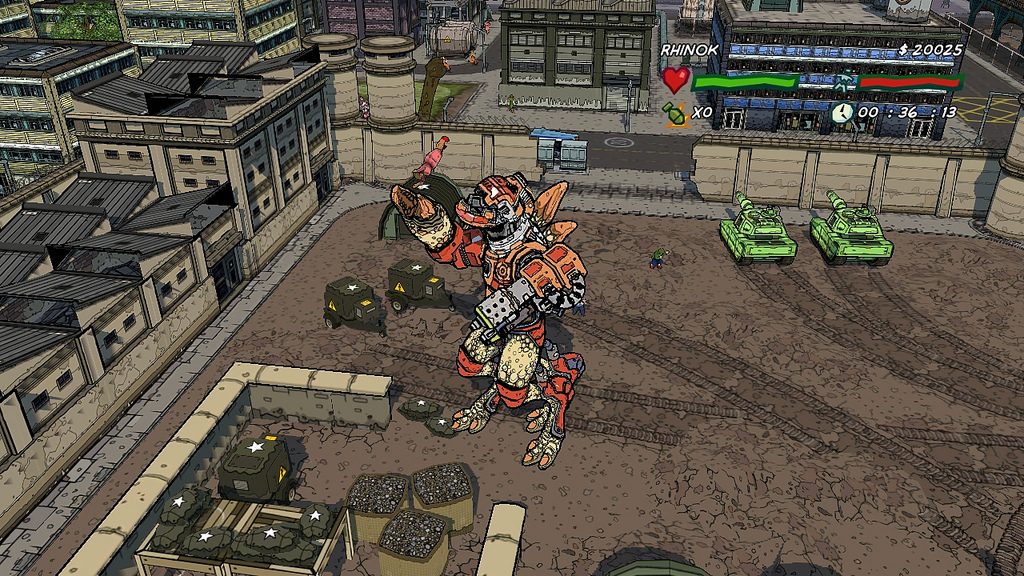 Hello, James again. Lead Designer on Eat Them! And I want to talk to you about Power Bars. I know, interesting stuff! It’s all rock and roll here at top flight game developers FluffyLogic.
One of the aims of the game is to maintain the pace throughout. We want the game to be pick-up-and-play – so session times will be short but the nature of the game will encourage repeat play. We are aiming for an old-school arcade feel and we want people to sneak in one more game before school, or when coming back from the pub, or between courses at a swanky dinner party! A game that is played in five minute chunks needs to be pacey and efficient – there’s no time for standing around when you should be beating the daylights out of a skyscraper or chomping through a bus load of tourists.
The other thing that’s important is eating people; if monsters aren’t eating, the game doesn’t live up to its name and whoever came up with the title it is going to go away disappointed.

So this brings us to power bars. In the E3 version of the game there are separate health and power bars – it’s a fairly typical set-up: the health bar is depleted whenever the monster is attacked, and the power bar drops whenever the monsters uses any of its weapons. Eating people increased both. So far so good…
We are very lucky to have a relationship with Sony which allows us to make changes to the design if we believe them to be beneficial to the game. It also means that when we receive feedback from Sony, we trust their opinions, and are happy to act on them. On this occasion we got some feedback which basically said “Why not combine the health and power bars?”. And you know what? We did.
Our man from Sony was right, the system we had in place had an unintended consequence: because a monster’s power decreased independently of health, players would end up running away from a fight, even if their health was high, because their weapons were out of power. They would then hide in a corner eating passers by until they could attack again. This isn’t, and never will be, the behaviour of a proper monster…
Now the two are combined, there is more emphasis on eating people to keep the monster alive, and it is rarely beneficial for the player simply to stand around. The power loss caused by using weapons is replaced with a small but consistent power use throughout gameplay, so the player is not dissauded from wading in all guns blazing.
We’re pleased with the new system, but it’s still early days – and it will undergo further refinements, I am sure, before you good people get to see it. But I hope I’ve given a little insight into the thought that goes into something as seemingly inconsequential as a power bar.