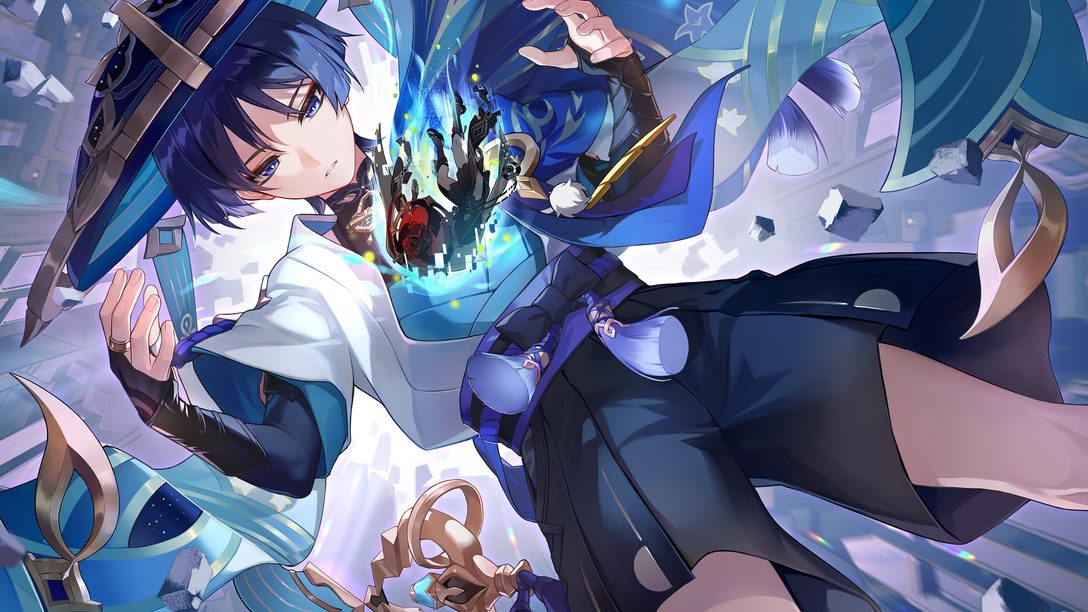 Meet the Wanderer and Faruzan, and take part in the card game that's been taking the Genshin Impact universe by storm.

Hello, Travelers! The Genshin Impact dev team is back with the latest news! After quelling a series of conspiracies and crises, we’d like to bring something different to the table, such as a round of Genius Invokation in our next update arriving on December 7!

In addition to the new card game, the upcoming Version 3.3 “All Senses Clear, All Existence Void” will introduce two long-lived souls to join the playable cast: Faruzan, and our once enemy Scaramouche, now known as the Wanderer. What’s more, you may also join Arataki Itto and a bunch of familiar faces to take part in a series of adventures and tricky challenges in the Test of Courage Event.

The Wanderer and the Scholar

Having lived longer than most ordinary people in this world, both of our new characters will become our allies after their long and arduous experiences in life. After Scaramouche was defeated as the final boss in Sumeru’s main storyline, this misguided soul seems to have found a different path in life as “the Wanderer” while in Nahida’s custody. In the new Archon Quest Interlude Chapter “Inversion of Genesis,” you will travel to Irminsul with the Wanderer to find out more.

Once a formidable enemy, the Wanderer is now a strong ally. Thanks to his Anemo Vision, this new five-star character can hover in the air and wields some of the coolest battle skills with a catalyst. Upon using his Elemental skill, the Wanderer will first cause AoE Anemo Damage and then leap into the air, entering a persistent hovering state. While hovering, the Wanderer will consume Kuugoryoku Points rather than Stamina to maintain the hovering state, fly upward, and sprint mid-air; meanwhile, his Normal Attack and Charged Attack will gain increased AoE and damage. Additionally, when his Elemental Skill comes into contact with Hydro/Pyro/Cryo/Electro, he will receive up to two of the four corresponding buffs, including an increased Kuugoryoku Points cap, higher Attack, higher CRIT Rate, and the ability to restore a set amount of Energy upon hitting opponents with a Normal or Charged Attack. Finally, with his Elemental Burst, the Wanderer compresses the atmosphere into a singular vacuum and stomps it down towards opponents. If the Wanderer was in a hovering state when, the hovering state will end after the skill is used.

Our four-star new character Faruzan also has an unusual past. Over a hundred years ago, this undisputed genius was accidentally trapped in ruins where a strange phenomenon stopped her from aging for years. Only till recently did she manage to clear all the mechanics and puzzles, and return to the Akademiya to continue her work as a researcher and mentor.

Faruzan also brings her talent and knowledge of mechanics into combat. Wielding the power of Anemo and a bow, she can be a great support for the team. Her Elemental Skill deploys a polyhedron that deals damage to enemies. After using her skill, her next Aimed Shot will become a special Charged Attack that creates a vortex at its point of impact after a short delay, pulling nearby objects and opponents. With her Elemental Burst, Faruzan will deploy a bigger polyhedron that moves along a triangular path and releases a Whirlwind Pulse that can provide an Anemo Damage Bonus to all team members, and decrease Anemo Resistance of opponents hit. When the polyhedron reaches each corner of that triangular path, another Whirlwind Pulse will be generated. Faruzan even applies her knowledge in exploration, earning more rewards when she is on a Sumeru Expedition.

The Wanderer, Faruzan, and Arataki Itto’s rerun will feature in the first half of Version 3.3’s Event Wishes, and the latter stage will see the rerun of Raiden Shogun and Kamisato Ayato. A new 5-star Catalyst weapon, “Tulaytullah’s Remembrance” will join the new Weapon Event Wish.

Starting from Version 3.3, you may now challenge characters, local NPCs, and even your friends online for a round of Genius Invokation! The primary objective in a match of Genius Invokation is simple: take down all your opponent’s Character Cards with your collection of cards. To start deck building, you need both Character Cards that deal damage with their character skills, and Action Cards including Equipment Cards, Event Cards, and Support Cards that provide various buffs and effects to diversify your winning strategy. Similar to the logic of the current combat and elemental system, Character Cards also have a Normal Attack, Elemental Skill, and Elemental Burst to deal damage and affect their targets with their elemental power. You may further trigger an Elemental Reaction by switching to a Character Card with a different element and using their abilities on affected targets.

Meanwhile, taking an action such as launching an attack from a Character Card, swapping between Character Cards, or using an Action Card often costs a certain number of Elemental Dice. Character Cards generally consume more Elemental Dice of their respective element. Starting each round, you and your opponents will toss eight eight-sided Elemental Dice, each with faces representing one of the Seven Elements or an Omni Element. A chance to reroll selected Dice each round may help you get more Dice of the desired Element.

To unlock more cards with exquisite Dynamic Skins, challenge more NPCs to level up and earn Lucky Coins to exchange for new items in the Card Shop. If you want to test your deck building, you can always duel with a friend or a random player online.

Version 3.3 also brings its share of fun events and challenges. In this season’s special, “Akitsu Kimodameshi,” you’ll find yourself going through strange trials with Arataki Itto to complete a series of “brick-breaker” mini-games. Unlike the classic version of the game, elemental reactions will make things more fun and challenging.

The Adventurers’ Guild will host another new event “Across the Wilderness,” where you will need to collect Wilderness Balloons within a limited time. Besides, the classic hide-and-seek game “Windtrace” is back again with several new improvements. The popular challenge event “Misty Dungeon: Realm of Sand” also returns with seven new themed trials to test your combat abilities.

And that’s all we want to share for the upcoming Version 3.3. We hope you’re having a good time in Sumeru and we look forward to seeing you in a round of Genius Invokation!