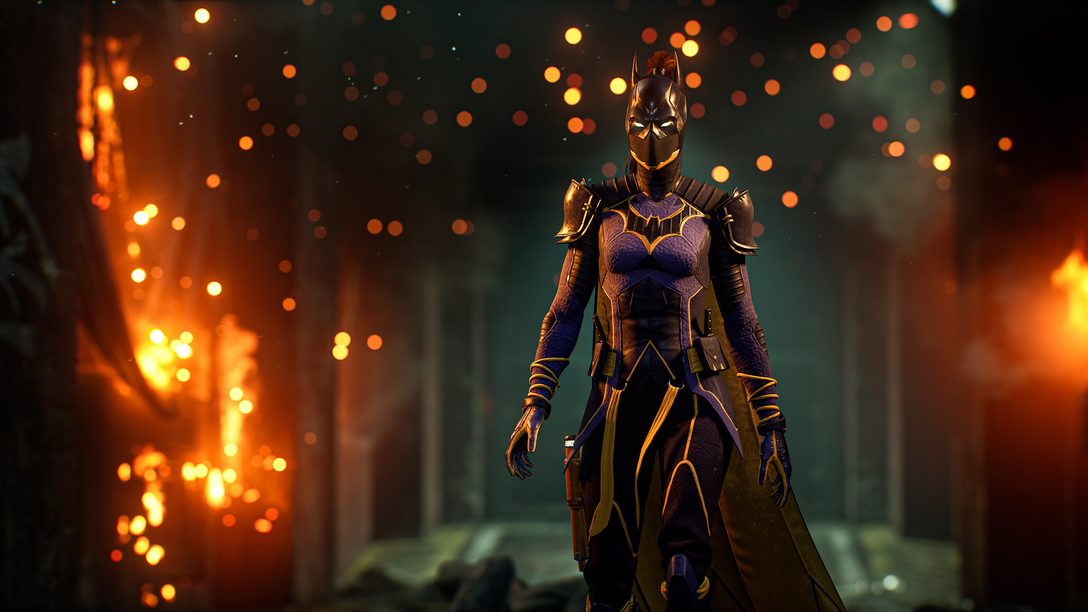 Four new heroes step up to protect Gotham, but which will ascend to Knighthood?

“What would Gotham be without Batman?”

It’s a question that feels almost sacrilegious, but is one Gotham Knights answers in thrilling detail – developer WB Games Montréal exploring what happens to a city stripped of its iconic protector.

As shown in the first preview back when the game was first revealed, instead of taking on the mantle of the Caped Crusader, Gotham Knights puts you in the spandex-clad shoes of Batman’s protégés in single player or two-player online co-op. Play as Batgirl, Nightwing, Robin, or Red Hood as they join forces to mourn their mentor and keep the city safe. One will become the Defender of Gotham by the game’s close, but it’s up to you to choose which character that should be as you experience their journey of grief, duty, and… weightlifting. There’s a lot of gym work going on in the Belfry.

Nightwing is definitely a gym fanatic. Harley Quinn doesn’t give him the nickname ‘Nightbutt’ for nothing.

After visiting the WB Games Montréal studio for two hours of hands-on play, it’s fair to say that decision won’t be easy. The hands-on showcased a few areas of the game at different points in the story. Firstly, a look at the start of our crime fighters’ journey as they’re reeling from the loss of Batman and picking up the mysterious work he left behind, and then jumping to a few hours in for the start of Harley Quinn’s villain arc (and then later still for her boss battle), offering a better look at the powers these superheroes can wield.

You can switch between the four playable characters with a quick trip to the Belfry, aka Gotham Knights’ central hub, and while they all share a core control scheme when it comes to melee and ranged combat prompts, Gotham Knights does an admirable job of infusing each hero with their own distinct personality and unique abilities.

Batgirl is a hacker specialising in one-to-one combat, with a fluid approach to movement and disarming enemies that feels not dissimilar to classic Batman. Armed with tech abilities such as overcharging enemy weapons for bioelectrical damage or using AR mode to hack into nearby devices, her combat feels powerful and precise, a testament to Bruce Wayne’s training that she’s honed into her own style.

Nightwing can be your support figure with abilities that buff allies, but he also excels in acrobatic beatdowns and pinballing between enemies during battle. Playing as Nightwing is a more frenetic experience; he thrives when taking down large groups of enemies with lightning-quick movements, getting in before they can hit back – as well as the aforementioned Nest power that provides a defence bonus and healing to friendly figures for stronger teamwork.

Then you’ve got the younger Robin – a master of stealth, utilising sneak attacks and pouncing from above, while completing the quaternity is Red Hood, an aggressive gunfighter who dishes out justice in a rain of bullets.

Red Hood dominates with his twin pistols, but isn’t shy about delivering a hefty blow with his fists in closeup combat. Both his ranged and melee abilities are enhanced with spectral, otherworldly powers thanks to his backstory of coming back from the dead.

These differences are made all the more spectacular thanks to Gotham Knights’ approach to Momentum, a combat mechanic where you fill up a bar with perfect dodges to unleash special moves that make use of each hero’s personal style. You can also fill up your Momentum bar with timed strikes, a precise press of the square button when you’re about to land an attack that makes it even more potent. It’s a satisfying, rhythmic beat in the combat that makes the fighting feel like dancing – it’s only if your character takes an errant fist to the face that the flow is broken. Understandably.

Nightwing, for example, does an acrobatic leap that pings him off the heads of his enemies, while Batgirl releases a storm of vicious Batarangs – each move feels natural to the character you’re playing as. Branching skill trees facilitate a level of customisation that makes each character feel tailored to your unique style, with each character possessing three unique skill trees they can select powers to upgrade within through AP collected by completing missions.

Each Knight can tap into elemental powers for extra damage, such as Batgirl’s Bioelectrical Elemental Effect that shocks enemies when their weapons are overcharged.

For Batgirl these are Justice, Grit, and Oracle, reflective of combat, stamina, and hacking abilities respectively, whereas Red Hood has Marksman, Brawler, and Vengeance for shooting, melee, and damage. Every Knight also has a personalised knighthood tree to spend AP in that encourages their progression to taking on the late Batman’s now-empty position, replete with unique, powerful abilities – like each Knight’s traversal method (think the Flying Trapeze for Nightwing, and Spectral Platforms for Red Hood) across Gotham. This all works incredibly well to maintain a sense of individuality, which is important in two player co-op when both players can select the same member of the Bat Family.

It’s not just within their skill trees these characters differ. Cinematic Director of WB Games Montréal, Wilson Mui, revealed Gotham Knights’ cinematics are designed with each individual protagonist in mind – meaning that often four completely different versions of the Knights’ reactions to the world around them have been voiced, mocapped, and scored to capture each character’s authentic personality in the moment.

You’ve essentially got four different experiences in one, with the option to swap between characters each night you go out on patrol in the city, or stick to one favourite to see their storyline through in its entirety. Coupled with costume collections that make for a constantly customisable superhero look – with various parts of each full suit able to be changed up as you see fit – as you progress through the narrative, you’re spoiled for choice when it comes to shaping the game however you like.

Playing as Robin whilst interacting with the villains of the game reveals just how new he is to the superhero business. This is reflected in his first uneasy encounter with Dr Quinn – unlike his more experienced counterparts that have a personal rapport.

Ultimately the four protagonists have a common goal: to protect Gotham by taking down opportunistic criminals and piecing together clues to larger events, while uncovering insidious secrets buried deep in the city’s foundations. Traverse the five boroughs of open world Gotham on the end of a grappling hook or on the back of the Batcycle (which, crucially, comes with a dedicated wheelie button) as you pursue leads on the Rogue’s Gallery of villains.

Of course, perhaps the most infamous of all these villains is Harley Quinn, who’s characterisation has been adapted from the manic pixie dream girl we’ve become familiar with in popular media to a more mature, somehow even more chaotic psychiatrist, one that can flourish in a city now devoid of Batman’s protection. Harley is allowed to stretch her wings as an independent being, which can mean only one thing: Gotham is about to get a whole lot messier. Luckily for us, she’s taking the Knights along for the ride.

Mr. Freeze, Clay Face, and Harley Quinn all appear in Gotham Knights, grappling with how they exist in and interact with a Gotham sans Batman.

Finding supervillains comes through detective work when patrolling the night-time streets of the city, taking down petty criminals in search of clues and information that lead to where they’re enacting their devious plans. Harley, however, we already know the whereabouts of thanks to some previous crime-busting shenanigans: Blackgate Penitentiary. This is where we first meet her in the hands-on, surrounded by rioting prisoners, flaming walls, and far too many party balloons for someone who should really be sitting quietly and thinking about what they’ve done.

As it turns out, Gotham without Batman might seem strange, but the reality is an exciting deviation from the stories we’ve heard before. It’s an uncanny approach to the DC legend, fresh and familiar at the same time, but a new era of protagonists means a whole new world of opportunities to explore in turn.

Gotham Knights launches for PlayStation 5 on the 21st of October, 2022.

Learn more about the co-op adventure at PS Store