WB Games Montréal’s new project finally made its debut at the recent DC FanDome event. An open world action RPG, Gotham Knights is an all-new tale inspired and shaped by the wider Batman franchise. It’s not a continuation of the studio’s work in the Arkham series; instead, it delves into unexplored aspects of the superhero fantasy.

In the wake of Batman’s apparent death, the extended Bat family — Batgirl, Nightwing, Robin and Red Hood — takes to the streets (and rooftops) of DC’s iconic city to continue the Dark Knight’s role as its protector, tackle the rising tide of crime, and take on threats both new and familiar.

In the wake of the game’s reveal (a thrilling team-up of announcement trailer and near eight minute gameplay walkthrough), I sat down with creative director Patrick Redding to delve deeper into the studio’s new unique vision for Gotham.

Tragedy hits hardest to those closest to it, which is partly why the studio chose this quartet — Barbara Gordon, former Robins Dick Grayson and Jason Todd, and one of the latest wearers of the mantle, Tim Drake — to focus on. “The original core of the Bat family” carry the shared weight of lives lived under the tutelage of Bruce Wayne and heroics shaped by the shadow of his alter-ego.

The other reason? Despite that connection, their methods and fighting styles are noticeably distinct from each other, making for a potent mix of gameplay styles whether adventuring solo or in two player co-op.

Red Hood is a brutal brawler with a focus on gunplay. Nightwing’s acrobatics lead to a more exaggerated style of fighting, while the current Robin favours stealth and is a dab hand at using status effects to disrupt enemies. And Batgirl? “She combines a laser-focused, targeted and efficient melee fighter approach with a lot of resilience and the ability to weaponize her environment using hacking,” says Redding.

Pick a hero and head out on your nighttime patrol, returning to the Belfrey, the Knights’ base of operations, at any time to tag in a different crimefighter. You’re never forced to play a specific character; you can play through the entire game with one hero if you so wish. But each vigilante will have a unique ability tree and craftable gear, with XP gains earned through open world activities.

The idea, Redding explains, is that the core gameplay loop intertwines with one of the narrative approaches. “It’s not one story set over one night, but really about the mid to long term growth of the hero. The game affords players a huge amount of growth and a huge amount of goal setting in an open world environment that they need to protect, that they need to go back to again and again.

“It’s that idea of how this new guard of younger heroes – that are not Bruce Wayne, are not Batman — approach the problem of equipping and training themselves up, preparing and adapting for that next major threat, that next major menace that they’re going to need to combat?”

On the subject of equipment, I ask about a certain visual treatment given to each hero visible in the reveal trailer. The neon-like colouring to their weapons: aesthetic only or is there more to it?

“It’s funny you brought that up,” Redding muses, “Because it’s a very important platform for us to deliver game information.” He points to the gameplay walkthrough as an example. “Some of those visual effects tell you what damage type you have equipped on your weapons.

“So it’s a way for the player to receive signs of feedback… that lets them know what protection they have, what they’re going to use against their enemies, both in terms of ranged and melee attacks.” 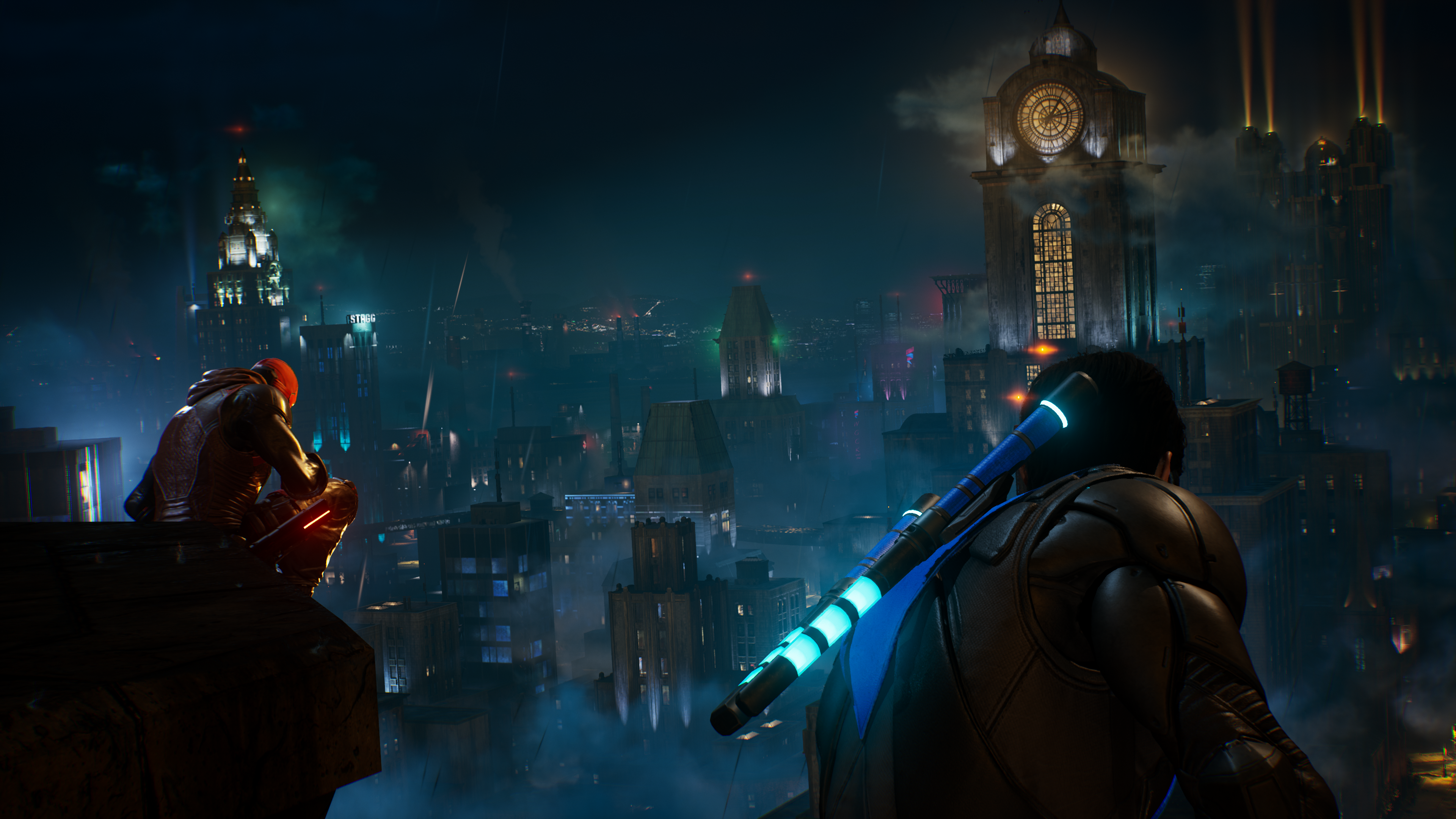 Contrary to Bruce’s pre-recorded message, the Belfrey’s tech isn’t as outdated as you might fear. “It’s literally a piece of dialogue in the game,” laughs Redding when I ask him how the heroes will cope. “Alfred says to Barbara: ‘only you and Bruce would ever say any of this is outdated’. They make fun of the fact these guys are used to being at the bleeding edge of everything.”

2. An evolving open world with a living, breathing ecosystem

One of the biggest characters in the Bat universe — quite literally — is Gotham itself. Working with DC, WB Montreal’s open-world, five borough-strong vision curates its inspirations — its interpretation — from versions seen across comics, movies, TV shows. “There are places and locations that are iconic, that have history,” Redding affirms.

It’s also one that supports multiple elements that boil together to create a vivid, ever-thriving ecosystem. A living citizenry who travel to work or the local grocery store, who add to traffic congestion or run home from the train station. Multiple criminal factions. The GCPD. And, of course, Batman’s rogues gallery, who as much as the Knights, are having to reinvent themselves in the wake of their nemesis’ death. Redding is excited for players to see what results. “It’s going to serve up a ton of variety, a ton of complexity that you can keep evolving, modifying and adding to as the player advances through the story.”

The Knights will explore this world by grapple or Batcycle, battling baddies and gradually finding evidence, major clues that point to the larger storyline, the next chapter of the larger mystery. And they’ll uncover a new threat that has its roots in the very foundations of Gotham’s history: the Court of Owls. 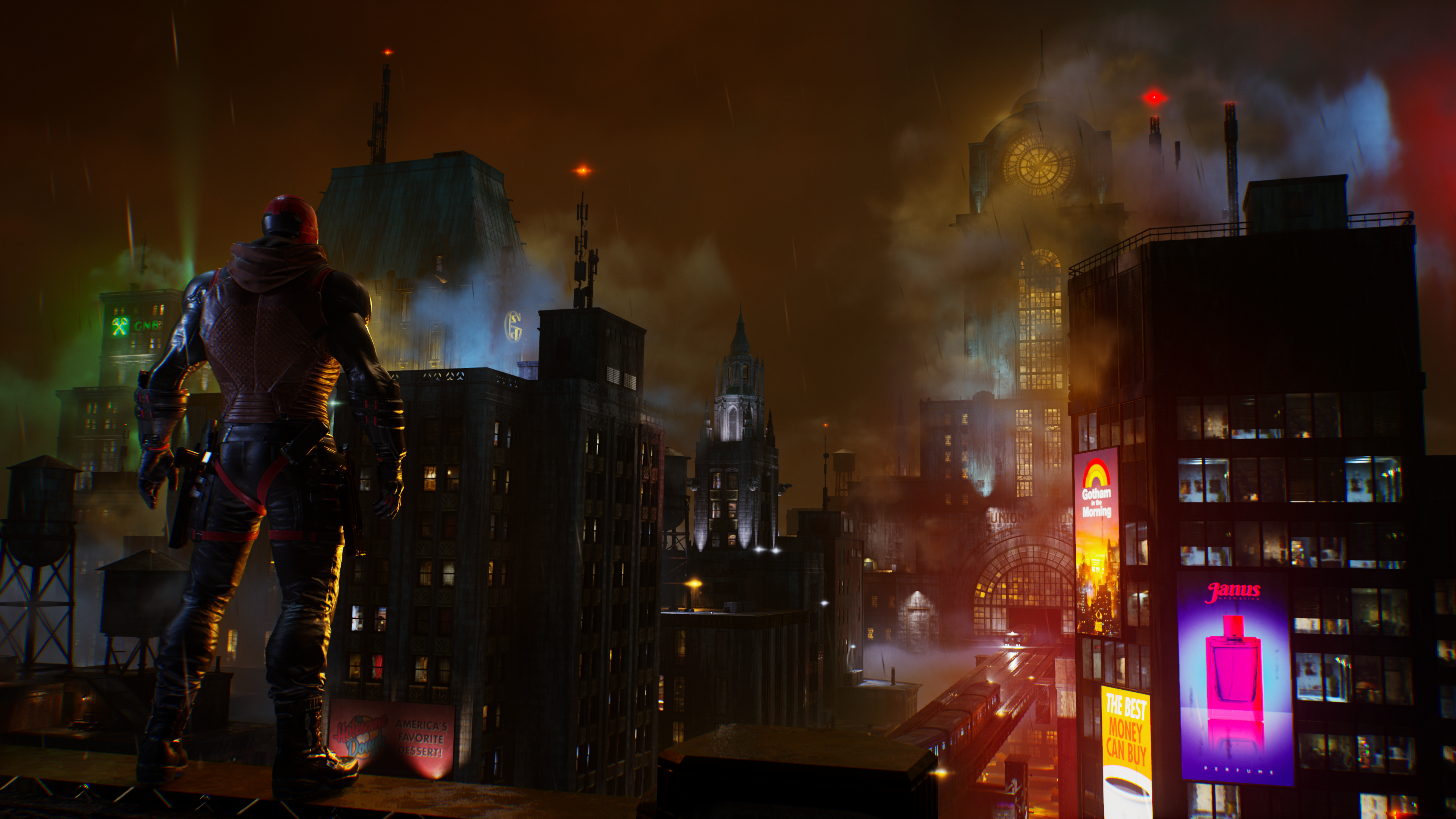 Villains, even street-level goons, will level up alongside your characters. The intention is to make you think about every fight. Lower-level criminals may inspire you to try something flashy. In contrast,you’ll want to change up your gear loadout or stick to stealth when  tackling more powerful foes. “We wanted to make sure that every encounter, no matter where it is, provides those kinds of choices,” explains Redding.

“They are all about the 350-year history of Gotham,” explains Redding of the Court. A fairly recent addition to the Bat mythos, first introduced in the comics back in 2011, The Court of Owls is a secret society that has shaped Gotham since its earliest days, whose “wealth and corruption and entrenched power twisted the city into its current form.”

The creative director goes on to explain how the Court’s long history with the city and their inclusion as the main adversarial force made the studio look at Gotham “as a historical place” and influenced its design. “History is embedded in the architecture and bedrock, in the very foundations of every square of the city.”

And as much as the Court is intrinsically tied to Gotham itself, the other villains you’ll tax your crime fighting skills won’t operate in a bubble; they’ll be part of and imperil the city you’re trying to protect. “We want to make you feel all that work you’re investing into protecting Gotham City,” outlines Redding. “Regardless of whether you’re dealing with a small street gang on a corner somewhere or dealing with a major supervillain like Mister Freeze.”

Villain Crimes will play out over multiple nights, “a series of encounters where the player has to do a certain amount of legwork and detective work to hunt down the villain at the next major confrontation.”

In all, WB Games Montréal presents a compelling pitch for its take on the Bat mythos. I’m intrigued to know more, but will need to wait a while longer before I can grapple my way across a new Gotham skyline and start investigating its many secrets.