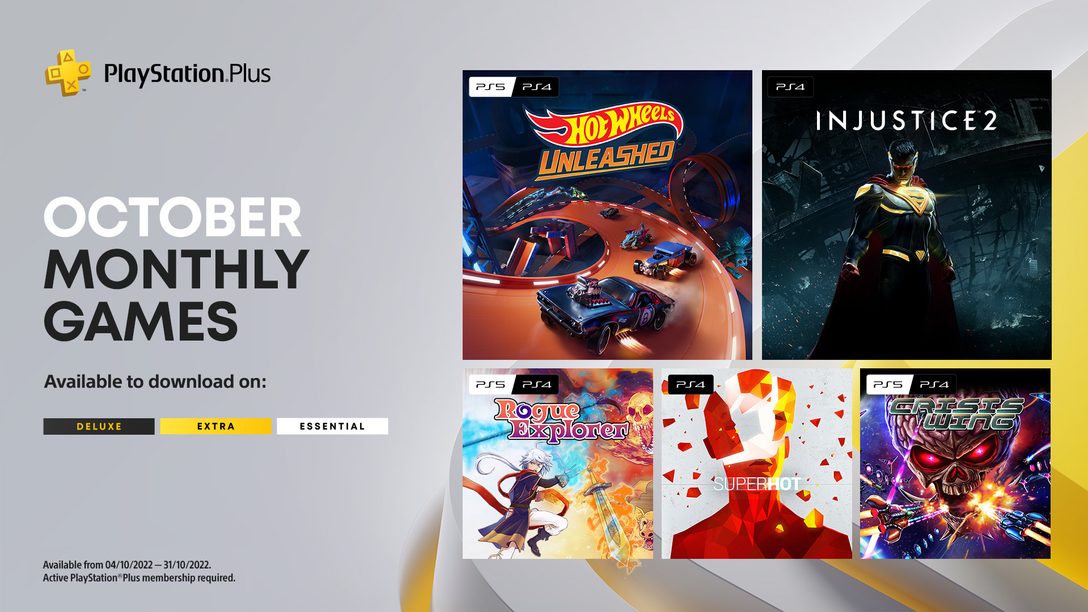 All playable from Tuesday October 4.

Today we’re happy to reveal the PlayStation Plus Monthly Games lineup for October. There’s superhuman clashes in the form of Injustice 2, big racing thrills with tiny cars in Hot Wheels Unleashed, the electrifying strategic combat of Superhot, the challenge of classic roguelikes in Rogue Explorer and the frantic action of arcade classics in Crisis Wing.

Let’s take a closer look at each of the Monthly Games.

Collect, build and race in this fantastic arcade sim based on the Hot Wheels universe. Earn new vehicles then take them to the track to race side by side with friends in two-player split-screen, or face up to 12 opponents in online challenges. One you’ve raced, why not try and build your own course? Create amazing layout inside and outside the track editor. Ad loops, special boosters, obstacles and special elements to make an incredible amusement park for your races, then share your creation online for other players to try.

The creators of Mortal Kombat return to the DC universe with the biggest superhuman roster. Select from twisted versions of iconic heroes and supervillains and bring epic-scale battles to awe-inspiring locations across the globe. Take on other players locally and online, or immerse yourself in the story-driven single player campaign as Batman struggles against Superman’s regime. You’ll earn gear after every match to equip, customize and evolve your roster.

Blurring the lines between cautious strategy and unbridled mayhem, Superhot is the FPS in which time moves only when you move. No regenerating health bars. No conveniently placed ammo drops. It’s just you, outnumbered and outgunned, grabbing the weapons of fallen enemies to shoot, slice, and maneuver through a hurricane of slow-motion bullets. Superhot’s polished, minimalist visual language helps you concentrate on the most important – on the fluidity of gameplay and cinematic beauty of the fight.

Journey deep into the abyss as a daring adventurer of your own design! Start in a humble hub town and venture into dungeons with varied biomes, each more dangerous than the last. Decide your character’s look, alter colors, craft weapons and armor from the loot you gather, upgrade your equipment and choose from a wide range of skill enhancements.

Last chance to download PlayStation Plus Monthly Games for September

PlayStation Plus members will have until Monday, October 3 to add Need for Speed Heat, Granblue Fantasy: Versus and Toem to their game library.