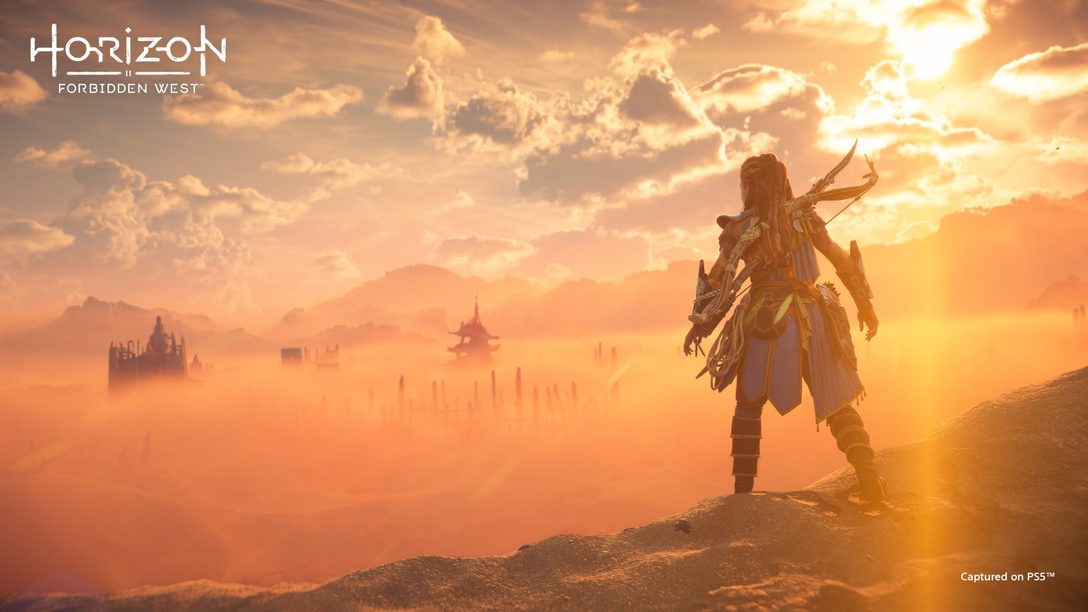 A deep dive into the creation of far-future Las Vegas with Guerrilla’s designers.

Horizon Forbidden West sees Aloy traverse dangerous and harsh environments in search of Gaia’s sub-functions, with hopes of restoring the planet’s terraforming system, rebalancing the biosphere and saving life on Earth. Though our story is set 1,000 years into the future, players will uncover and recognize many iconic locations from our real world today.

DISCLAIMER: Please note that this behind-the-scenes feature contains major spoilers for the storyline and many gameplay elements of Horizon Forbidden West. To get the most out of this in-depth article, we would strongly recommend completing the quest The Sea of Sands prior to reading.

During the quest The Sea of Sands, Aloy ventures into the arid Stillsands Desert in her search for Poseidon, one of Gaia’s sub-functions. At first, the desert appears desolate, however, hidden under the sands are the flooded ruins known as Dunehollow, formerly Las Vegas.

It is up to Aloy to piece together data fragments left behind a millennium earlier by a businessman called Stanley Chen and reactivate the city’s long-forgotten water systems in order to gain access to Poseidon.

Guerrilla Quest Designer Samantha Schoonen led the development of this quest, The Sea of Sands, from start to finish. To bring this vision to life, she did a lot of research on Vegas’ iconic Strip.

“We looked into casinos and ideated on crazy ideas for far-future Vegas buildings,” says Schoonen. “I drew a lot of inspiration from our concept art as well, and we thought of things like a broken-down roller coaster area, remnants of a pirate ship, and a rooftop swimming pool – we worked a lot with our art departments to figure out what would work, though of course not everything made it into the final game.”

Designing this epic questline was a long process full of iteration and collaboration, says Samantha. “For main quests, we always start out with a story summary provided by our Narrative team,” she says. “Based on that summary, we write a design document containing all information, like story beats, quest objectives, a world map of the area to provide an overview of the quest flow and locations, and a detailed description of these areas.

“We then make an outline of the space. I use in-game reference images to get an idea of the level design and space itself, the outlines. But it’s hard to get a scale of the place while only working in 2D, so as soon as possible, I create a 3D layout in our Decima Engine. We then continue to iterate on flow and level design until everyone is satisfied.”

“Building a quest that uses water was always going to be a challenge,” says Schoonen. “I remember how difficult it was to build the Waterlogged quest for Horizon Zero Dawn: Frozen Wilds, and of course, Las Vegas would be a lot bigger! We worked closely with various teams like tech, visual effects, and lighting to ensure we had the systems in place for underwater quests to function. We wanted to control where the water would be, as well as the air pockets, and visibility had to be adjustable.

“We worked closely together with core design as well, who were in charge of the swimming mechanics. This would be the first quest where the player was able to dive to depths that were unreachable before.”

Core Systems Designer Lennart Hoting worked on quite a few traversal aspects, including swimming and diving, which are new in Horizon Forbidden West. “We were looking for new heights and depths to explore and new types of natural beauty to showcase,” says Hoting. “As the underwater world is inherently fascinating and mysterious, it felt like a natural extension to traverse long-lost unknown places, such as Las Vegas. We consciously turned away from any oppressive tone of underwater gameplay and focused on fast and agile traversal, with enemy encounters revolving around stealth to add tension.

“Early in development, we investigated which aspects of water could make for interesting gameplay challenges while also increasing immersion. Water currents soon came to mind. Aloy will sometimes encounter strong water currents that push her away from where she wants to go. You can attempt to sprint through them, but the best way to get through is to make use of underwater boost bars. Aloy can grab onto these and push off of them to gain a short burst of speed which can launch her straight through.”

As Aloy acquires the Diving Mask, giving her unlimited air underwater, she plunges into the ruins of Vegas. “Our initial routes for traversal were way too long, so we decided to have a single elevator shaft to go up or down,” says Schoonen. “This shaft could not be too large due to the above-ground visuals, nor too small for the player to move around in or the elevator to be able to function once the quest was completed.

“Once Aloy swims down the elevator shaft, she gets into a Casino space and eventually into the lobby. I really wanted the player to immediately be caught off guard by the Tideripper before becoming aware of the size of the space as a grand opening.”

There are some rather dangerous machines in the waters of the Forbidden West, including Burrowers, Snapmaws, and the huge Tiderippers. “Aloy has no way of attacking while swimming, so she has to be smart and stealthy to circumvent enemies,” Hoting adds. “The best way to stay out of sight is to use smoke bombs or hide in kelp. These plants grow dense enough that they stop unaware machines from spotting you while giving you the opportunity to peek out while hiding inside. This creates a moment of extremely tactical cat-and-mouse gameplay.”

Samantha continues on this subterranean location. “The underground dome is a dangerous place teeming with machines, so we added a few structures for the player to hide in as they move between hiding spots,” she says. “The machines are on patrol paths, which change whenever a node is activated. We then place the machines alongside the player’s route to their next location to create an ever-present threat.

“A lot of the areas went through various iterations, as the building entrances, nodes, and sewers needed to be out of sight but not impossible to locate. Real-world Las Vegas sources its water from the Nevada Hoover Dam, so we wanted to convey something similar with the holographic map the player encounters early in the quest.

“We were so inspired by Vegas and wanted to make the quest worthwhile. By putting in multiple elements, like tracking, combat, stealth, and small traversal puzzles, the player is given lots of variety in gameplay to make it feel fresh. It was definitely tricky to add enough elements without relying on combat and puzzles, which mostly rely on physics. That’s why we also added some air pocket spaces where the player could traverse and interact with the environment.”

After Aloy successfully makes her way through the Snapmaw-infested waters and activates Stanley Chen’s ancient water management system, the water drains from the city. Suddenly, the scale of the dome, and the buildings within, becomes clear. Aloy must navigate them more traditionally by climbing, gliding, and running, with the dome becoming a large arena for an awesome battle.

Remember that Tideripper mentioned earlier? With most of the water now drained from Dunehollow, Aloy will still need to deal with this challenging machine before finally getting to Poseidon.

Samantha Schoonen explains how the arena for this battle was created. “We worked together with the combat team as this space required several elements to work,” she says. “the Tideripper needed a body of water to emerge from, so we built something of a beach where it could refill its Purgewater Sacs. The arena also needed to be quite deep so the player wouldn’t accidentally leave the area. Lastly, it needed a flat space for the Tideripper to move and, of course, grapple points to give Aloy a quick getaway – though some of those had to be destructible for an added challenge!”

After defeating the Tideripper and obtaining Poseidon, Las Vegas truly comes back to life. Mesmerizing holograms illuminate the sky with ghostly outlines of buildings that collapsed long ago; memories of a forgotten city.

“Having Vegas visually flourish was always part of the narrative vision for this quest,” Schoonen says with a smile. “Poseidon took over the Vegas water and power supply which was connected to the holograms. After Aloy fights the AI, the system fully reboots and the original holograms take their place lighting up the night sky. The quest’s ending was a huge collaboration; teams like concept art, cinematics, environment art, visual effects, and lighting all worked together on that beautiful moment. I only placed them in the right locations and made sure they showed up at the right time.

“We all put a lot of love into building this area. I’m astonished by how well this quest has been received, and I’m happy to hear the community has had a great time playing through this underwater world!”

As far as her own favorite moment, Samantha Schoonen finds this hard to choose. “For a designer, a game is never finished,” she says. “I’d have to look back ten years from now to have a clear opinion because I played through it so often during development. I think it’s more the entire journey of building this quest; that’s my favorite part.”

And as for Lennart, he says, “I really liked seeing that many players enjoyed the underwater sections of the game and that some even said these were their favorite parts. The response to the Sea of Sands quest, and the love for unique characters like Morlund you meet along the way, was especially great; it is one of my favorite quests. While some players remained anxious about diving, the Diving Mask seemed to really turn these sections into something players enjoy. Reading that people were able to overcome their fears and enjoy the diving experience is amazing.”

There’s much more to discover in and around Vegas following the Sea of Sands quest, now featuring a settlement called Hidden Ember; we’d definitely encourage you to return for a special quest with Morlund, speak to Porguf in Camp Nowhere, or deliver Ornaments to Stemmur, and wonder about the holidays of the Old Ones as they light up the Vegas skies.If you’re interested in more of the story behind the Vegas ruins, you can watch back our recent livestream with Samantha here (we’re live every Thursday at 4PM CEST, www.twitch.tv/guerrilla).